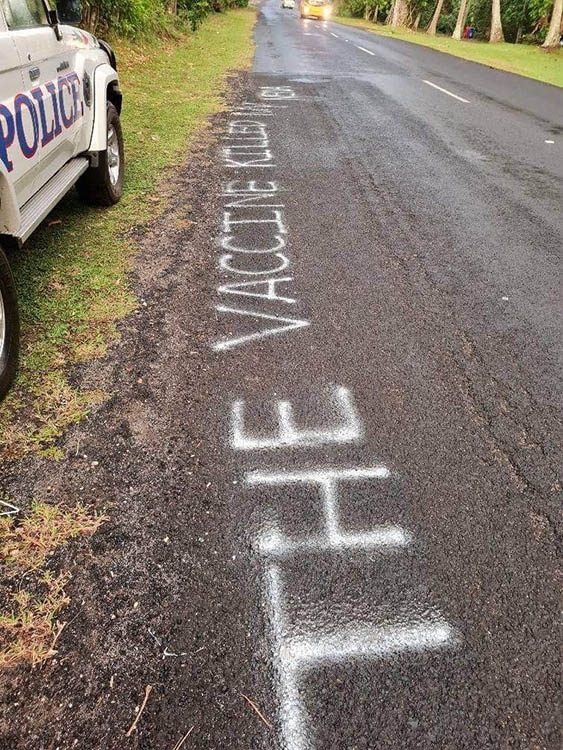 The re-painted words reading ‘The vaccine killed my nena’ placed for the second time on the main road in Nikao. (Photo: Cook Islands Police Service) 21060918

A graffiti writer has struck twice over two days at the same spot in Nikao with a message police say may contravene Covid-19 laws, in addition to the Crimes Act.

The message first was discovered on Tuesday morning opposite the social centre and was removed later that day, only to re-appear again yesterday.

The processing area for those wishing to receive the Covid-19 vaccine is also located in the immediate area.

The message in both instances was painted in white and read “The vaccine killed my nena”.

Police believe both offenses were committed in the early hours of the morning.

A police spokesman said there would be a penalty for those caught committing such acts.

“The road graffiti is vandalism,” said spokesman Trevor Pitt. “There is a penalty for this act, irrespective of the writing.”

Police would be considering a breach of the Covid-19 Act in addition to alleged breaches of the Crimes Act, the spokesman said.

“Since there has been a reference made to the vaccine, police may look into whether there has been a breach of the Covid-19 Act, section 22, which refers to the publishing or communication of harmful information in relation to Covid-19.

“The message is pretty straightforward. Obey the law, there are consequences of unlawful activity.”

This week, Te Marae Ora Ministry of Health began administering the second round of Covid-19 vaccines at Rarotonga Hospital.