‘You try and fit your life into a paragraph’ 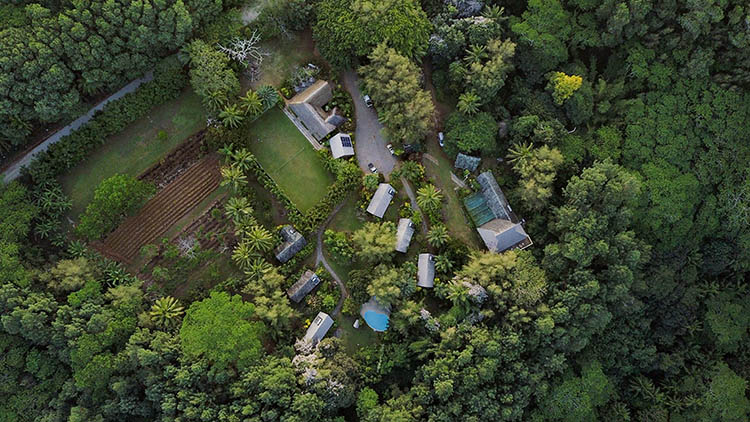 When former Cook Islands News editor Jonathan Milne and his family visit Atiu Villas, the story-telling rambles late into the night, and beyond.

Dinner in the airy ‘are is finished. Ika mata, chicken, a distinct Atiu take on rukau, green salads, papaya with coconut and bananas and more.

But still Roger Malcolm sits there at the table, a glass of wine by his hand as he peers seriously through his glasses. The 75-year-old is discussing rocket propulsion, modes of crossing the English Channel, and the origins of the first vaccines with our oldest son, 10-year-old Monty, as the younger boys play nearby in the dark, amid the luxuriant bushes and flowers.

It was in 1796 that Edward Jenner, a country doctor living in Berkeley in England, took fluid from a cowpox lesion on a milkmaid’s hand, and successfully inoculated a village child against smallpox.

Nearly 225 years later, world scientists’ pursuit of a Covid-19 vaccine is the subject of after-dinner conversation on a Pacific island almost as far removed as can be from the pandemic circling the globe.

No place on earth is untouched by Covid. But the way it affects Atiu is different from how the virus infects most of the world. It’s different even from the economic impact on the tourism-based economies of Rarotonga and Aitutaki.

Atiu Villas, built by Kura and Roger Malcolm on her family land, is the only real tourist accommodation provider on Atiu. Then there are a small number of tour operators: Birdman George Mateariki, Caveman Ben Isaia, Mata Arai’s famous coffee tours, Joshua Jim and his partner Daisy Maui Matakino’s cultural tour, and Lucy and April’s breakfast with the whales ...

Kura and Roger’s children have long since grown up and left the island. One is an accountant; the other a bio-engineer. But for their parents at home on Atiu, there is much that continues unchanged and unspoiled.

This island, where the waves broach the reef and dash against the makatea cliffs, is very different from the low-lying atolls of the north, and even from sandy-beached Rarotonga and Aitutaki. Here the villages sit in a tight cluster high atop the island, their roads radiating out from the church at the centre of the island.

Teatukura Takaiti was born 76 years ago in the village of Teenui. Although her mother was a Mokoroa, she was fostered by her aunt Rima and uncle Takaiti and lived with her foster parents most of the time. She went back and forth between the two households. “I lost my mother when I was two years old,” Kura says. “I continued going between the two households like she did. There were many other children who lived the same way, time with the parents and time with the grandparents.”

When she started at Atiu Primary School, the new building was still under construction. One day she was called to the headmaster’s office. “I was absolutely frightened as I had no idea what I had done wrong,” she recalls.

She was made to stand by a window sill – or where the sill would be when the building was completed. The workers moved the sill up and down till it sat just beneath her chin. Kura was the shortest pupil – they had worked out that if she could reach the sill then every child in the school should be able to reach it, to collect their daily cup of milk.

This was – and still is – an island where everybody contributed in their different ways, to nurture and feed the whole community. They kept beehives, and made honey taffy and coconut toffee. There were tomatoes, oranges and copra – and this was very hard work indeed.

“At times serious work could be exhausting, especially in the plantations in full sun,” Kura says. “When the boats were expected some classes were let off for a couple of days to allow the children to help with the picking of the fruit, packed and ready for export to Rarotonga and on to New Zealand.

“The children even helped carry tomato boxes from the market house to the wharf, onto big lighters then to the ship. All exciting work, and the children were paid for the work done.”

In 1956, Kura won a scholarship to Tereora College, and then on to Whangarei Girls’ High School in New Zealand, four years later, then to Ardmore Teachers’ Training College – where all Pacific Islanders attended for primary school teacher training. Finally, she returned to Cook Islands to teach at Nikao Side School on Rarotonga and it was there that she met Roger.

For those that listen to them speak, or correspond with them now, it may seem difficult to believe that both Kura and Roger say they struggled with English and writing at school.

“When I finally gained university entrance, I had a ceremonial bonfire of all my notes, exercise books and textbooks,” Roger Malcolm says. “The only book I saved was a dictionary given to me for coming school runner-up to dux.”

After completing his undergraduate science studies, Roger travelled to Rarotonga to study upper atmospheric night glow for his PhD. He met Kura, “and she was a life changer”. It is only now, sitting in the home and business they have built on her family land in Atiu, that he can even begin to realise just the extent of that change. They married, and he describes their return to New Zealand prosaically. “The usual job, car, children, house, mortgage and then a stable public servant job in Wellington followed.”

But that was not the life either of them wanted. “I was bottled up in a well-paid head office job and when the airport on Kura's home island Atiu opened, we were off to holiday on her island.”

Before then, he laughs, a holiday on Atiu was either five hours or five weeks, depending on which boat you caught. The island had no electricity, no running water, no telephone and 1500 people.

“It triggered my pioneering ancestry,” he says. “I was sold.”

Visiting Atiu, they worked with Iaveta Short to get work underway on a landing strip – a project Kura’s father had started around 1940 but was forced to give up, because of World War II. The government showed interest in the project, and took over building the new Atiu airport.

Kura was not fond of sailing, and she was determined that when she returned home, it would be by air.

And finally, Ewan Smith had launched Air Rarotonga and was flying to Atiu. On the Malcolms’ first flight to Atiu, Teenui Mapumai MP Papa Vainerere Tangatapoto asked them when they would move home and build accommodation for the anticipated arrival of tourists when the airport opened. Kura’s family agreed to lease the couple some family land, to build chalets.

And so, in July 1979, they returned with a sawmill to build Atiu Villas – on the top of the island, not far from that first airport project. They planned to build six villas, a restaurant and their own home over the course of five years, but the project expanded. Atiu Villas, built by Kura and Roger Malcolm on her family land, is the only real tourist accommodation provider on Atiu. 20123105

Kura worked as a teacher at Atiu College, while Roger put in a well and a water pump, built a tank, installed a generator and began work on the first of the villas. “We had an old, old pick-up with holes in the floor so on rainy days going through puddles meant a jet of water coming up through the floorboards,” Kura says.

Roger worked with two young men – milling, treating, planing timber and building the first villa from native timber. Each villa is made from the polished woods of mango, coconut, red peanut, acacia, cedar, Java plum and other tropical trees. Next was a two-bedroom house for the couple to live in. At one time, the young men went on strike because they were being charged taxes.

Kura recalls those early days. “I dreaded the thought of washing motel sheets by hand so made him promise to get me a washing machine first!”

So did he? “The first thing he scrounged around for himself was a fridge for his beer. He got one that was not working. It had no lid to the freezer compartment for ice blocks. He fixed the fridge, and made a wooden door for the ice compartment – and he had his cold beer and ice blocks!”

Kura resigned from teaching, started Round the Island Tours, resumed keeping bees for honey, and opened a kitchen to serve meals for their visitors.

As they built their lives and brought up their two children, they ran a sawmill company, a general store, a shipping company, exported gladioli flowers, and Roger even did a stint as mayor. And their grand project, Atiu Villas, continued.

“And 41 years later,” says Roger, “maybe it is finally finished.” Jonathan Milne and his family tuck into their dinner at Atiu Villas. 20123102

Now they have a manager, Jackey Tanga, whose dedication to the business may yet, they joke, allow them to retire.

Jackey returned from Australia in 2011, to accompany her grandmother’s body home. She stayed to look after her aging grandfather and took a job at Atiu Villas, at first mowing the lawns, then picking up guests from the airport – and it grew from there.

Sitting in the dining room, where Jackey has cooked tonight’s dinner, Roger quizzes Monty on the flags that line the rafters. Some depict the nationalities of the many international visitors who have dined at these tables; some are the flags of countries that Kura and Roger have visited. Atiu Villas manager Jackey Tanga: “I love that my children can run around the island happy. and I don't have to worry where they are because when you go looking, you just need to scream out and one of the mamas will reply back that they have them.” DANIEL FISHER / COOK ISLANDS TOURISM/ 20123106

At dinner, after dinner, and over subsequent exchanges by email, we too have quizzed them – but one evening, one article, can’t come close to doing their story justice.

Roger sums up his narrative, drily. “You try and fit your life into a paragraph.”