Welcome aboard this Air NZ flight 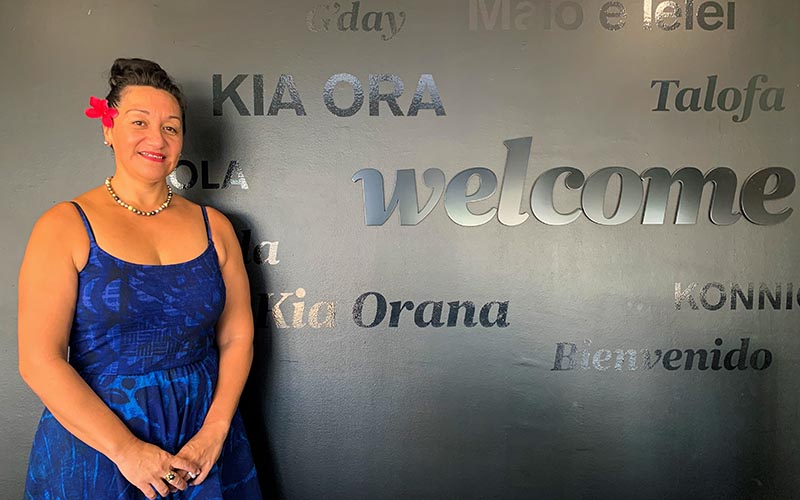 Addrienne Hosking-Tinirau is proud to be the first woman of Cook Islands descent to be appointed as Air New Zealand country manager. 20112001

For Addrienne Hosking-Tinirau it’s still sinking in that she will soon take over as the Air New Zealand country manager in Rarotonga – the first woman of Cook Islands descent to hold the position. By Katrina Tanirau.

Passion for people made Addrienne Hosking-Tinirau a perfect candidate for a customer service role at Air New Zealand, although it was a job that she almost got by accident.

In 1992, she returned to Rarotonga “for a year-long break” after working in Hayman Island, Australia - her first job straight out of school.

While working at the front desk of Tamure Resort, Tim Darby and other “Air New Zealanders” were there holding a farewell function.

First impressions last and Darby was wowed by the young lady with the beautiful smile and a bubbly personality. A phone call and an interview followed.

“I happened to be in a perfect position that night,” she says.

“At a young age of 19 I became a customer service agent at Air New Zealand. Luckily, I had my mum who was also an ex-Air New Zealander so she supported me and pushed me to follow through.”

Almost 28 years later, Hosking-Tinirau will take the reins as country manager, the first woman of Cook Islands descent to hold the position.

It’s no big secret that her career aspiration was always to one day be in the top job, she says.

Over the years, she has worked as a customer services agent, a trainer and supervisor.

“As you do within a company, you see lots of change, you go through a lot of managers so you experience a range of leadership styles from different people and you learn along the way,” she says.

After 10 years as a customer service agent, a supervisor position came up, the first time around Hosking-Tinirau was unlucky but it didn’t stop her from carrying on.

“I knew there was going to be an opportunity to step up to a leadership role at some stage so I just hung in there.”

The second time around, she was successful and so began a journey of learning and development.

Outgoing country manager Marisa Newman beams with pride as she talks about her friend and colleague’s appointment.

Country managers sign a three-year contract, but with the coronavirus pandemic sweeping the globe, that has been extended to four years for Newman.

Newman and her family are set to head back to Wellington where she will become lounge manager in Wellington, Christchurch and the Pacific Islands.

Like Hosking-Tinirau, Newman has held various positions during her time. Rarotonga has become home for Newman, her husband Dave and their children, and while it’s a bitter sweet departure for them all, she is a great believer in keeping things moving and making way for those who have the talent and potential.

“It’s not goodbye forever, it’s simply ma te wa as we say at Air New Zealand, see you soon. We will be back for good one day,” Newman says.

“We are going back to New Zealand very different people from the ones who landed here four years ago.”

Air New Zealand fosters an environment based on the koru that takes pride of place as their logo, and the new beginnings and the circle of change and improvement that this symbol represents.

Hosking-Tinirau is grateful to have had the guidance and advice of all her previous leaders, in particular Newman.

“If you want to develop you really have to have those honest conversations with your leader so they can help you, coach you and mentor you,” she says.

“Since Marisa’s arrival I have just loved the honesty, the integrity and the way we work together as a team.

“But it’s certainly not goodbye, we are family and as the lounge manager for the Pacific Islands she will be coming back regularly.”

Hosking-Tinirau is under no illusions that she has a big job ahead of her with the aviation industry one of the most significantly impacted by the Covid-19 pandemic.

“Back in January I had an inkling that this pandemic was going to be around for a while,” she says.

“But thanks to Marisa, Brent Roxburgh and Air New Zealand I’m definitely prepared for this.”

Make no mistake, she says Air New Zealand is here to stay.

Newman and Hosking-Tinirau work closely with the Cook Islands Government as part of the Covid-19 taskforce.

“We will do whatever we can to support the government and Te Marae Ora to ensure that our borders are kept safe and only opened when it is absolutely safe to do so,” she says.

Moving forward, Hosking-Tinirau will continue to work with key agencies including Cook Islands Tourism and the business sector.

If everyone takes personal responsibility, Hosking-Tinirau believes the country will remain Covid-19 free.

A week after announcement of her appointment was made internally, Hosking-Tinirau says it’s still sinking in and she has been overwhelmed by the congratulatory messages, phone calls, flowers, hugs and kisses.

“This is great for the Cook Islands and for Pasifika women, but at the same time it’s about staying humble, I’ve still got work to do.”