Time to turn on the tap, but it’s not that simple 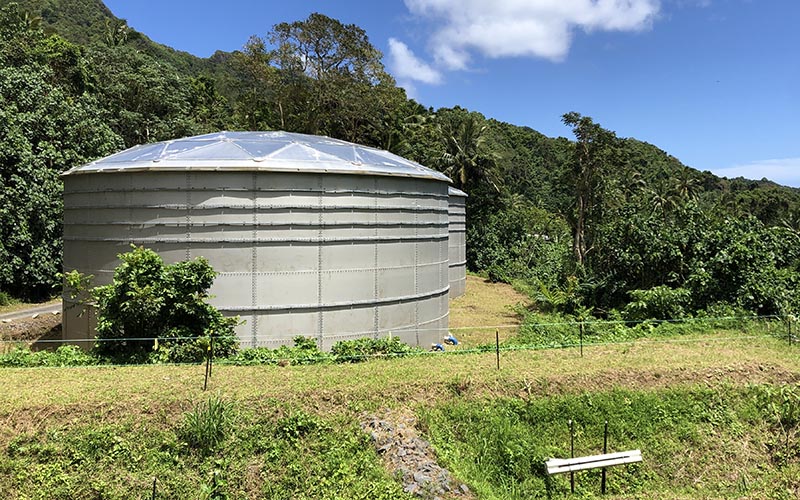 It has been a bumpy ride, but work on Rarotonga’s revamped water system is nearing an end. From the outset, elected leaders were committed to delivering potable water to residents. Cleaner water is now coming through the taps, but it’s not up to international drinking standards yet. Te Mato Vai project manager Peter Free is committed to seeing the ultimate goal become a reality. Emmanuel Samoglou reports.

The $100 million Te Mato Vai water infrastructure project is in the final stages of completion, but the new system has already begun delivering treated water.

Announced in August 2012 during the 43rd Pacific Islands Forum meeting in Rarotonga, the undertaking to overhaul the island’s 10 water intakes and introduce a new treatment process was billed as the largest infrastructure project in Cook Islands history.

It has been a tumultuous process.

Stage one of the project - which saw the replacing of 32 km of pipes that make up Rarotonga’s ring mains - was marred by allegations from government officials of shoddy infrastructure against the Chinese company contracted to carry out the work. The result was $13 million worth of repairs and the involvement of lawyers to sort out the mess.

Landowners also accused the government of poor communication and trampling their rights.

Despite claims that chlorine disinfection – which is a contentious issue for some - isn’t part of the treatment process, a government agency went ahead anyways and began laying the groundwork for its use.

And environmentalists and citizen action groups continue to argue the water treatment process hasn’t been adequately studied to assess how Rarotonga’s streams and ecology will be affected from the use of chemicals.

With that backdrop, New Zealander Peter Free recently decided to enter the fray and take on the role of project manager and see Te Mato Vai to completion. “I’ve done a lot of water treatment projects around New Zealand. We had a guy up here who was looking to retire, and there was someone who thought I should take over,” he says.

“They said I should come over and take a look.”

That “guy” was former project manager Evan Mayson, who led the company’s involvement after it was awarded a contract in mid-2014.

At the time, the new ring mains pipes were being laid down and GHD was brought on board to look at the details, such as renovations of the water intakes, building access roads, water treatment methods, and increasing storage.

Free’s first site visit took place October 2019 and after a couple more visits, he took on the role.

“It was around May that I took over managing the project as a whole.”

Free has worked on numerous projects in New Zealand and all the way to the United Arab Emirates, but says working on a treatment plant for a rural North Island town with lots of cattle ranching gave him a good foundation to approach Rarotonga’s water needs.

But Te Mato Vai is rather unique and creating a system for Rarotonga posed unique challenges.

Firstly, instead of a single high-volume treatment facility to serve an entire population, the island’s unique geography necessitated 10 smaller ones to be built for each catchment area.

And there’s no power or mobile coverage where the infrastructure would be built.

From afar, the $100 million water system’s processes seem fairly straightforward. Rain falls into the island’s verdant valleys and is collected at intakes where gravity takes it through a filtering process all the way to the tap.

But zoom in, and the process comes highly complex with a wide range of factors at play.

The first stage of the process is the intake, where water is collected at a small dam and passes through a metal grate. It looks like a simple metal screen, but Free says it is shaped optimally to ensure large objects such as leaves are kept out while not impeding the flow of water.

From there water flows into settlement chambers, where a chemical called polyaluminium chloride, or PACl, is added to the supply to remove floating particles of dirt and debris.

Once that sediment is removed, water moves to green tanks called Automatic Valve-less Gravity Filters (AVGF), which are essentially large sand filters that remove the smaller particles and protozoa.

The final resting spot for the much cleaner water are massive stainless steel tanks, where again, gravity will eventually bring it to households and businesses.

At this point, the main sticking point with Te Mato Vai’s detractors are the chemicals.

The use of PACl, which acts as a coagulant by binding to suspended particles in water, is currently part of operational trials at nine of the 10 intakes where the treatment processed is being analysed. An environmental impact assessment is also underway to assess the environmental effects of the PACl.

During the trials, officials are also learning about the right dosage of PACl required, and how that can change after rainfall. A backwash/scour pond, which is used to initially store PACl sludge and other filtration byproduct generated during the treatment process. (PHOTO: EMMANUEL SAMOGLOU)20112703

“That’s what they’re about, to understand all the conditions,” says Free.

“There’s always a little bit of sediment. As we’ve found with the results that we’re getting, there’s still bacteria there (after the treatment process). It’s not as bad as it might be during heavy rain, but it’s still there.” The settlement chamber where PACl is added. This is where large particles are removed from the water. (PHOTO: EMMANUEL SAMOGLOU). 20112705

At a tour of Avatiu intake this week for landowners and elected officials, landowner George Taikakara asked Free and other project officials about the process of monitoring what happens in the hills and mountains where rain water falls, and the potential for high levels of the bacteria generated by human activity and wild animals to enter the water supply.

In response, GHD deputy project manager Matt Boyd said catchment committees are being set up under the To Tatou Vai Authority Bill, which is currently going through the select committee process.

“That’s the job of the landowners and the caretakers of each individual valley, to look after that catchment and figure out ways to control what you’re saying,” says Boyd.

“We don’t want anyone going to the toilet upstream of the drinking water system.”

Prime Minister Mark Brown in a March 2013 Cook Islands News letter to the editor wrote: “Firstly, we should not lose sight of what the overall goal of Te Mato Vai (Water Partnership) is--Te Mato Vai aims to reliably deliver potable (drinking) water to the boundary of all buildings connected to the existing network by 2015/16.”

Potable water, however, requires disinfection. And as the government repeatedly says, it has not decided on a method for this. Polyaluminium chloride ‘sludge’ after removed from a backwash/scour pond. Officials are yet to determine on a disposal method for treatment by-products. (PHOTO: EMMANUEL SAMOGLOU) 20112701.

But the equipment and gear to use chlorine has already been installed at the intakes.

According to Boyd: “The system is designed to clarify and filter the water, it’s not designed to disinfect it. The government is still undecided on a disinfection method, and the options on the table are chlorination, UV, and ozone. They all have pros and cons. The recommended option that we’ve given is for the system to be chlorinated, just because it provides a residual down the network.”

“It’s very important if you want potable water, that’s one way to achieve it.”

And so, this is where Free finds himself, at a crossroads, where government must soon make a decision and decide how Rarotonga’s water can become drinkable and meet international standards.

Developing water treatment systems is never an easy process, says Free, and getting to this stage has been a lengthy process.

“They always are, but this one, probably a little longer than most. There’re 10 plants. I’ve never worked on 10 plants at the same time.”

And with that, Free and his colleagues await Government’s direction so they can begin putting the final piece in a most complex puzzle: How to deliver clean drinking water to the people living on a remote, mountainous tropical island in the middle of the Pacific.