The secret to happier, healthier life 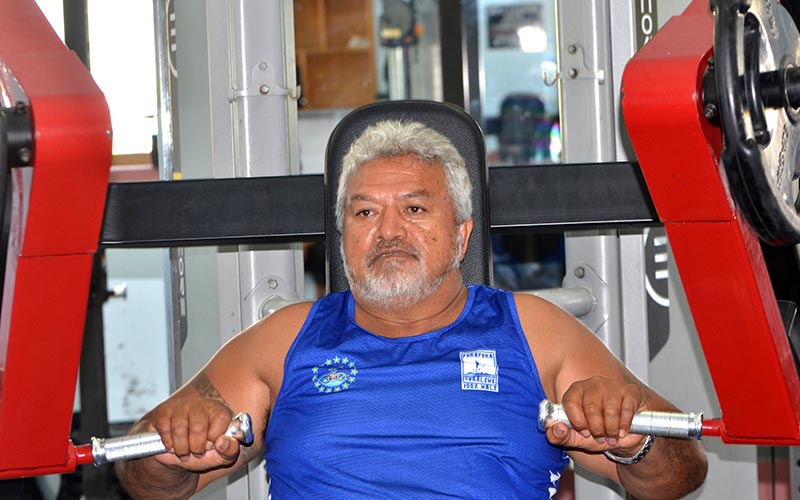 Henry Tupa is not afraid of death and when the fear of it beckons, he believes and trusts in his Catholic faith to guide him through.

In the early months of 2019, Henry Tupa endured an endoscopy at Rarotonga hospital; tissue from his stomach would be sent to New Zealand for tests, and the doctor had cautioned him saying it “could” be cancer.

Not waiting for the results, he immediately called a meeting with his wife Rae their son Tupa, their daughter Lesley and her husband Eddie Nicholas.

“I wasn’t afraid to die, but I was so disappointed in myself, that I had let myself, my family and my body down,” Henry says.

“As a Catholic I accept our belief in the resurrection and I believe in my faith, when you trust, when you have faith, you know where you’re going to go.

“I just kept feeling so disappointed in myself for not looking after myself properly - it was just laziness.

“I’ve always supported Men’s Health awareness campaign, but I wasn’t looking after myself.”

Henry’s health scares began last year with migraines so excruciating; he would stay overnight in hospital.

“It was so painful, I could barely move, just lie there…”

A few months later he experienced agonising twisted stomachs pains that sometimes would go on for 12 to 24 hours, “I couldn’t stand up, all I could do was lie down in the hospital bed.”

“When the pain came, I didn’t care who could hear me, I couldn’t stand it, I cried out with the pain that would go for a few minutes; then a few minutes of relief like nothing was wrong, then it would start again.

“So, they decided to put a tube in my throat and into my stomach (endoscopy) to have a look.”

His results came back negative.

But he was still in denial about his health and stubborn, “the doctors kept saying I was overweight, but I wouldn’t listen…

He was back at the hospital for knee surgery in August 2019 and in November for a surgical procedure for an ingrown toe nail.

In January this year, Henry began to feel more uncomfortable and lazier, dragging his weight around.

“I thought, I’d better do something, so I started walking and working harder in our vegetable gardens and normal home chores, but I was still gaining weight.”

Come February, he was keen to be more active and tagged along with his wife to her Cardio Combat classes at the Tupapa Centre.

“I walked in thinking, surely there would be guys around, but there were only four guys in their little corner and the place was dominated by all these energetic ladies.”

“I couldn’t, because my wife was pressuring me to stay and I felt so embarrassed; I pretended I was okay but I couldn’t keep up with the ladies, so I made excuses to skip the rest of the class.”

The Johnson classes were also happening at the time, but Henry wasn’t interested.

A few months ago, his boss, Internal Affairs secretary Anne Herman spoke about the Johnson 8-week challenge and encouraged staff members to join.

“Anne is good, she pushed me to join the classes, if it wasn’t for her, I’d still be struggling with my weight.”

Confident he signed up, “I was good, it’ll be like a walk in the park… it wasn’t.”

Tupa is an early riser, used to waking up at 2am to cook doughnuts for their Hartel store.

“I chose the 5am class because no one goes to the gym in the early hours of the morning. I was wrong, so I joined the intense and extreme 4am class, it’s popular too.

“This was my turning point, when I realised there are people out there that are really pushing and challenging themselves, I was so excited and really wanted to be part of the team.”

Tupa hooked up with police officers in the class with Leighton Boaza as a training partner. “I used to coach Boaza back in the days in the Premier A grade for Tupapa Maraerenga.

“Boaza guided me through the different training and kept on encouraging me. Sometimes I felt I was holding him back on his fitness training, but he was determined to help me and got me through challenge.

“In a Johnsons class, you never know what you’re going to get, like a can of fruit salad, every class is a different 45 to 50 minutes hard out workout.”

Although his body ached all the time and felt unbearable, he kept at it.

“The training sets look simple but you have to look at your options, or you’ll end up with feeling like I did,” Henry says.

He pushed himself so hard that sometimes he would hurl.

And the extreme sweat that poured from his body was astonishing.

“I was easily drinking 3 litres of water in one session (but now I can just sip the water).

“Sweating hard out, at times it would run into my mouth and eyes, onto the floor and I would slip over.”

Short of breath he would fall to the floor from exhaustion, without a care who was around him.

“I didn’t care who was around me as long as I completed the set at that time.”

After the training session, Henry says he would feel pain, like a truck had run over him.

“I couldn’t reach my backside, or bend over properly and my arms feel numb and would shake when holding a glass of water.”

Bad leg cramps or a pulled muscle disrupted his sleep, but determined he would pretend nothing painful had happened and continued to attend classes.

After two weeks, he lost 6kg and participated in the 10 mile run/walk during the Rarotonga marathon. “I was so happy with my result, I knew that things were definitely changing for me, for the better.”

Henry’s biggest challenge was the food planning and changing his diet.

“When I started eating porridge it tasted like plastic, horrible; today I’m ok with it as I know it’s goodness for my body.

“I have to be honest with myself and have the right attitude or else it’s a waste of time doing Johnsons. There is no magic potion or special secret for weight loss, I just need to be patient and take things slowly day by day.”

In the next two weeks, he lost two kgs and felt utterly disappointed in himself.

Refocused he strictly got back on the food programme and achieved a weight reduction of 13 kg at the eighth week.

Henry only eats twice a day, a big breakfast and a late lunch. with plenty of salad and greens.

He has cut out all sweets like fruit, cake and chocolate.

“I love my ice cream and chocolate, my whole family loves chocolate, but no I’ve cut it all out.”

A keeper of beehives he also has fresh honey to use for his meals.

“And I don’t drink anymore,” he noted.

Henry is currently in the Johnsons six weeks’ challenge with a target to lose 9kg to reach 110 kg.

At 59, he loves challenging the younger guys.

He is happy that his whole family has joined the Johnsons classes and enjoys the Cardio Combat sessions on Saturdays.

“My wife had tried in the past to get me to lose weight, but I wouldn’t listen; now I’m the one who is strict with our food.

Weighing 116 kg, Henry can now easily run up the flight of steps to his house.

“I used to stop and gasp at every step and sometimes even had to walk sideways to get up my stairs … now I’m like gliding up,” he grinned.

Henry encourages others to join in the Johnsons, Cardio Combat or exercise sessions in the community.

“And please, take your doctor’s advice, do something about it, don’t be stubborn like I was – at the start just going around and around in circles until you fall down again…”

“It is also great to see the Minister of Health Hon. Rose Brown and her husband Taoro attending Johnsons.

“To Terry Strickland (Dr Johnson) and your wife, your staff and the hundreds of freaky mates in my classes, meitaki maata, I’ll see you all apopo.

“To my nephews who are doctors and my sisters in Australia who are nurses, I’m doing so much better now.

“I’m happy, my wife is happy and my family we are all healthier. The only thing is, now we fight over her pair of shorts,” he adds with a laugh.