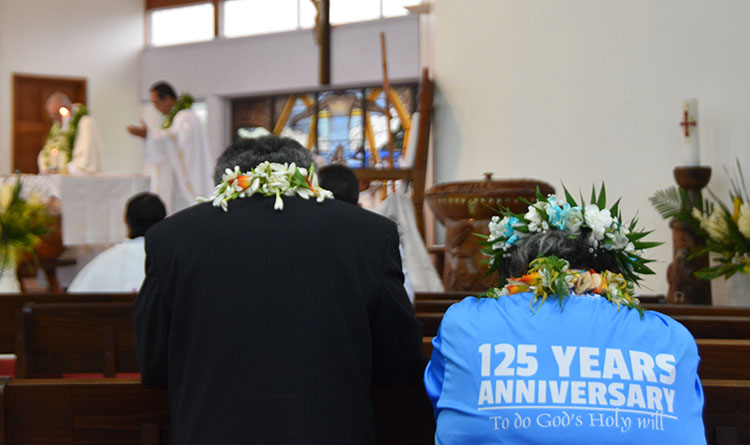 Among the hundreds that gathered at St Joseph’s Primary School for its 125th anniversary was former student Julia Solomona-Moetava.

Wearing a rito hat and bright smile, the 76-year-old stood proud among the many ex-students who attended the event on Thursday.

For Solomona-Moetava the event was extra special.

Her great, great grandmother Vironika Rikiiti was in the first intake of students in 1895.

“She was of full Catholic faith, we would get up in the morning and go to Mass,” Solomona-Moetava says.

Solomona-Moetava’s mother Estell Rima taught at the school in the 1950s.

“I taught 40 children in a class, the children were very good.

“When we had visitors come in, the children would always stand up.

“It was a good school to work at,” she says. A book produced to mark the school century in 1995 states on July 14, 1895, after much consultation with authorities in both Tahiti and The Vatican, the first two Sisters of St Joseph of Cluny arrived in Rarotonga and a third soon followed.

They were Sister Lydia Berger from France, the first Superior, and two Irish Sisters Mary Hearn and Cecilia O’Donnell.

Within a few weeks, the Sisters started the school and they soon had a roll of 80 students.

In 1949, due to the rapid expansion of the school in Avarua, there was a need to relocate the school buildings.

The new school was built further inland but closer to the church and the priest’s house.

The convent simultaneously received new buildings and ample space for the Sisters’ accommodation.

From an old house with limited space to a modern building or ample spacing, the school boasted eight classrooms with toilets and shower facilities with extra rooms for teacher use, a health clinic and a library.

In 1950, a boarding school was opened with a relatively small but select group of girls training to become teachers.

Another separate boarding school was established for girls interested in taking up the profession of religious Sisters.

In 1960 secondary education was established at St Joseph’s School but was canned two years later due to a lack of teachers.

The kindergarten was established in 1963. Students took part in a variety of activities related to the anniversary in the lead up to the event and on the day. 21071608

Thursday’s celebration was a structured event kicking off at 8.30am when attendees gathered at the school and marched to nearby St Joseph’s Cathedral for Holy Mass.

They were joined by parents, staff and guests before making their way back to the school for the cutting of a 125th anniversary cake, plaque unveiling, class presentations, class exhibitions which trace the school’s history.

The celebration culminated with dancing, drumming, a cultural show and a shared lunch.

School principal Savenaca Tukitoba says it’s been an exhausting task, while the feedback has been overwhelming.

There had been anxiety in the lead up to the event as the school sought to fundraise to help cover the costs.

In a combined effort, $8000 was raised through a radiothon held on Friday last week.

Donations were still coming in on the day of celebrations, Tukitoba says.

“I asked one elderly man why he was giving me an envelope with a donation of money after we had already raised $8000 through the radiothon.

“He said the school had done a lot of things for him, he identified that he came to know Jesus Christ when he attended the school from grade 1 to 6.” Former student Julia Solomona-Moetava, 76, was at the celebrations. Her great, great grandmother Vironika Rikiiti was in the first intake of students in 1895. 21071605

Another former student told Tukitoba, while making a donation, that she was not looking at what had already been collected, but looking to give back to the school.

Tukitoba, in debriefing students on Friday, challenged them to do the same.

“You will be around when we turn 150 so make sure you come to those celebrations.”

Tukitoba says there were descendants of the first class of 1895 involved in the event.

Bishop Paul Donoghue, in acknowledging staff who served in the first 100 years, says many would have worked “whether they were going to be paid or not”.

“Many gave 50 years of service, out of faith they gave everything.”

What is clear now, is there is partnership between the Catholic church and the government, says the Bishop.

“It will work if both sides are committed, in the 10 years I have worked here there has been cooperation. “The Catholic church was responsible for at least 100 years, it wasn’t supported by government; I wonder how the church was able to do that.

“The Sister worked day in, day out, I see the Sisters as the anchor keeping St Joseph’s in its right place.”