Rarotonga: Home away from home 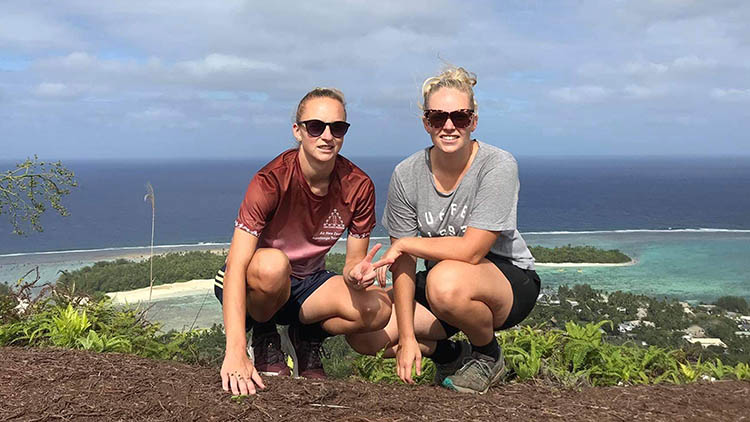 Coral Seath was holidaying in Rarotonga when NZ went into lockdown. Instead of rushing home, she and her partner Carlie Paterson chose being ‘happily stranded’ in the Cooks. She left months later, looking forward to seeing her family but sad to say goodbye to Rarotonga – her second home.

New Zealand footballer Coral Seath turned down the request to play football for Puaikura in the local women’s competition, earlier in the year.

She told herself she could not stick around for the whole season if she was not going to be on Rarotonga for long.

After much persuasion and convincing from a player, she popped down to their training. The hidden talents among local football players changed her mind.

With New Zealand in lockdown, she and her partner Carlie Paterson decided to extend their 10-day Rarotonga stay into a longer vacation, allowing her to commit to local football.

Boosted by Seath’s inclusion, Puaikura went on to make a clean sweep in the domestic competition winning the Round Cup Championship and Knockout Cup titles.

She also featured for Mangaia at the Cook Islands Games. The side won gold medal in the women’s division.

Yesterday Seath, 26, boarded the Air New Zealand flight returning to Dunedin and taking with her all the memories and relationships she built with both the Puaikura and Mangaia football teams during her six months stay on the island. Seath says she returns with mixed emotions – excited to see her family in New Zealand but sad to say goodbye to the island she basically called her second home.

Recalling how she joined the football team, she says: “It was quite funny. I got asked to play by a lady who is part of the club, she saw me kicking the ball outside. But I said I was on holiday and not interested to play.”

“And then I was stopped on the side of the road by the Puaikura sport president, found out we had some family ties, so then he tried to convince me. I told him I was not here long enough - I can’t stick to a season if I won’t be around,” Seath says.

“And then on another occasion, one of the players working at IDCK stopped me on the side of the road and said just come along for training and check it out. She managed to convince me.”

Seath popped around one afternoon to see what training was like.

“I saw a lot of talent that was not really getting utilised. So, I thought ‘yeah’, I joined the training, they bought my boots so I really had to play. I had good experience with coaching back in New Zealand so they asked me to take a few sessions and I got hooked.”

Her guidance helped Puaikura claim the Knockout Cup title for the first time in 11 years and Round Cup title after eight years.

“It is a big achievement for the team,” Seath says.

Seath also joined the Cook Islands Games this year playing for the Mangaia football team who also won gold in the women’s division.

“I felt lucky to represent the island, it was a cool experience.”

Seath was sad to leave the team especially when “they had just got started”.

Her advice for young female football players: “Take opportunities when it comes to playing for senior women’s team, they give you experience that young girls’ teams don’t. It makes you a stronger player.”

“Video record your games and send it to people/schools, it is the best way to get scouted. If you want to go far in football, it has to be number one, focus on football alone.” During their stay on the island, Seath and her partner have been working in an “on-call capacity” with Cook Islands SPCA who provided a lot of support for them here.

“We spent the last six months spending time with Raro dogs and helping people with their animals,” she says.

“It has been a real eye opener, because what you see here you don’t see in New Zealand. SPCA and Te Are Manu give so much. Rarotonga is lucky, there are two charities who are willing to do as much as they can.”

Seath acknowledged Edgewater and the Whittaker family who provided accommodation for her and her partner and many rescue dogs.

“They were our feeding parents and without them we would not have been able to achieve nearly as much with the SPCA or my football,” she says.

“I will miss the people I have met and the summer weather and the relaxation of it all. I look forward to returning to Rarotonga for another holiday.”

Seath started playing football at the age of 11, made the senior women’s team in Palmerston North when she was 14. She played school football and a bit of U20 for New Zealand before moving to the South Island where she joined a club in Dunedin.