Rangokere – a time to share, be grateful and appreciate Mauke 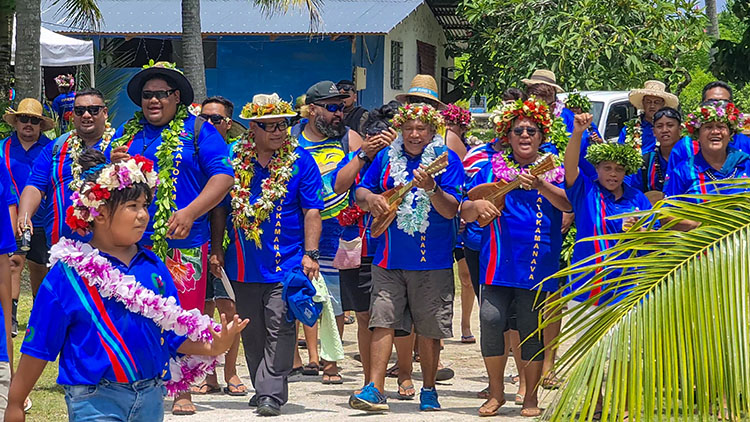 The Christmas and New Year Day festive season in Mauke is about “rangokere” – the gifting of baskets of food, the picnics, the joyful songs and dances and the hosting of specially prepared feasts in homes – teretere or roni.

In Mauke, there are no Christmas trees or presents, instead the people come together to celebrate and share the spirit of the season.

They turn to “rangokere” – the gifting of baskets of food, the picnics, the joyful songs and dances and the hosting of specially prepared feasts in homes. These traditional festivities are also known as teretere.

Mama Teura Tuakanangaro Snow, who is in her 80s, recalls these traditions that began before she was born. But back then, she says a village would get together and the feast was prepared in one communal umu before the food was shared among the people.

These days, residents of each participating home in the village prepare their own baskets of food.

There are no Christmas trees or presents, instead the people come together to celebrate love and appreciation and to share the spirit of Christmas by gifting food.

The experience of Rangokere gave Fisher an insight into how the islands in the Pa Enua continue their traditions during the festive period.

“It’s not about the predictable Christmas tree or Santa Claus; it’s more about a time when everybody gets together to celebrate – a time to share, be grateful and appreciate the island.” Carrying a basket of food for the rangokere Mauke tradition of gifting baskets of food. Photos: Daniel Fisher/21010811.

As opposed to giving presents and Santa, Fisher says, “it’s a whole new perspective of Christmas and New Year’s holiday, it’s essentially a time when the whole island opens up”.

Rangokere is held on Christmas Eve and New Year’s Eve between the villages of Oiretumu and Kimiangatau; the oire (village) take turns in hosting the gifting of food baskets.

Thirteen families in each oire participated in rangokere, a total of 26 homes.

Fisher was astounded at the openly giving nature of the people.

“Seeing the selflessness of the whole concept of rangokere, the giving people - with their crops, farm animals and seafood, they give freely to another family knowing that blessing will be returned in the future.”

The morning of Christmas Eve starts off with a service and intense joyous singing followed by the village parade to the hosting Cook Islands Christian Church (CICC) to present their baskets.

Names of the family who have presented the kikau basket are written on each basket; the pastor of the hosting church/village then allocates the baskets to each receiving family.

For the New Year’s Eve rangokere, the village who received baskets on Christmas eve would reciprocate a basket to the same value or greater.

It is understood that in the past some families would feel pressured and would return the same baskets they received on Christmas eve.

This time they discouraged families not to return the basket they were given in obligation.

Instead, they were encouraged to approach the family and ask what they would like e.g. fish, crops, pigs etc.

Fisher says: “There is no ill feeling between the oire’s, no boasting or teasing, you get to meet everyone, everybody is on the same team and just enjoys it and has a good time, you get to meet so many people you meet the whole island.”

The teretere or roni held on New Year’s Day and hosted by Kimiangatau saw 150 people participate in and out of the procession.

One of the highlights for Fisher was the singing and being merry with everyone visiting the delegated homes.

“It was such an awesome afternoon walking through the oire for a customary progressive dining experience – every house offers something different from food, drinks and sweets, we had an awesome time.”

Fisher has the fond vision of a Mama in a white dress carrying an old-fashioned styled teapot, and winking while pouring hot drinks for people.

“It was a hot drink, with bourbon,” he adds with a laugh.

The elderly on the island don’t miss out either, they ride their motorbikes door to door joining in the celebrations.

Due to Covid-19 related travel restrictions, overseas families could not attend - usually an average of 500 Maukean’s from Australia and New Zealand would visit.

But a large number of 100 Rarotonga and Aitutaki residents took part in the rangokere and set up tables for the roni.

Fisher says the event is, “definitely something to experience to truly understand what rangokere festive season is all about, I saw why so many Maukean’s return for the occasion.”

Other festivities that occur are the picnic days and according to Fisher, “that has an interesting element, basically it’s like our version of a runathon in Raro but on wheels, dancing and singing”.

People were surprised with the amount raised, between $1500 to $2000, which averaged to about the same as previous years, says Fisher.

Frances Taoro, who also attended rangokere, recalls her childhood memories of the festival.

After the picnic, trucks and motorbikes drive around a village, stopping at houses. People come out of their homes and join in the dancing and give a small donation. “In the olden days (when she was little) the whole island participated and it was usually held inside the church yard. The yard was filled with baskets of food, mainly pigs and taro, local crops, wild chicken - that morning you could smell the roasted pigs’ people were preparing for their baskets.”

Taoro is saddened that nowadays the entire island does not participate in the rangokere custom.

“Nowadays it’s just within the CICC, we have gone back to that way of thinking it’s a CICC thing - it’s supposed to be the whole of Mauke. It’s a way of giving and sharing what you have with your neighbour in the next village, it’s an important event.”

In those days just after New Year, people would select the pigs for the rangokere, they would feed and fatten it and prepare their crops, says Taoro.

In the past few years, carton of chops and chicken are bought, and Taoro believes the costs have actually deterred people from participating in the event.

“I wish we could go back to how it was, for the whole enua, the whole island to be part of it.

“It would be so exciting if everyone on the island got involved and we built up this event again, instead of looking at it as if it’s on its way out.”

Taoro, who was delighted at the participation of the rangokere for 2020/2021, says “the love and sharing was awesome and a lot more people took part.”

Eileen Story, who lives on Mauke, says the event is important and special.

“At Christmas when you don’t have any family you can feel so alone, so it’s a time when everyone comes together to be with each other. “I really enjoy that the island comes together to gift families with food baskets and those families not only enjoy it for themselves but share it with other families that may not have participated in the rangokere.”