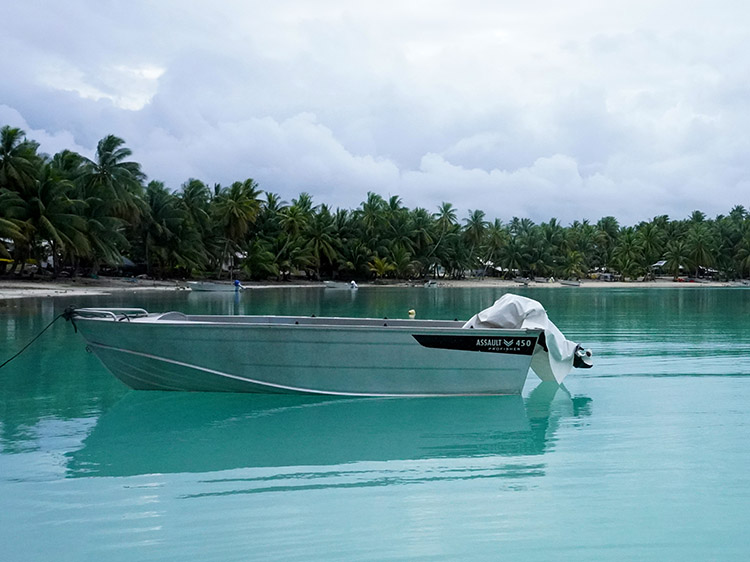 During a trip to the Northern Cook Islands, Cook Islands News journalist Emmanuel Samoglou saw places of incredible beauty but facing isolation, a lack of resources, and economic hardship. Yet at the same time, residents enjoy a freedom that comes from choosing to live life on modest terms. In this first part of a two-part series, he writes about the island of Pukapuka.

Earlier this year, I was soaking in the lagoon with my partner and daughter, having just arrived in Rarotonga as tourists.

I struck up a conversation with a friendly man who was doing the same, cooling off with his family. When he said he was from Penrhyn, I did what I often do when I meet someone from the Pa Enua, steer conversation so I can hear some enchanting stories of life on the outer islands.

And as it often happens, our chat ended with a common lament – the difficulty of life in these remote places, and lack of affordable and timely transportation to get there.

The northern atolls of the Cook Islands are the elusive travel dream of many.

Unique geography, stunning landscapes, fresh and healthy food, the seemingly unperturbed life of locals – the key ingredients are all there for bucket list travel.

I’ve been infatuated with those islands since I first visited Rarotonga about eight years ago, but like my new friend, I just couldn’t work out a way to get up there.

And then a miraculous thing happened. Me, a stressed-out and moody journalist whose Rarotongan vacation earlier this year turned into an improbable escape from a pandemic, was invited to go on a four-night expedition to Pukapuka, Manihiki, and Penrhyn.

I was presented with the opportunity and with a dead pan face in front of my colleagues, I took up the offer calmly as a journalistic call of duty.

Inside though, I felt as if I was throwing handfuls of colourful confetti into the sky and performing an ura pa'u. I may or may not have done the latter in the privacy of my home later that night.

Anyhow, weeks later I was sitting in a wide seat aboard Air Rarotonga’s Cessna Citation II private jet, putting on my seat belt as I listened to the plane’s engines beginning to rev.

“Let’s do this,” I said to myself, looking back at my five fellow travellers and our main tour guide, pearl farmer and businessman Kora Kora from Manihiki. Beachside huts in on the main islet of Wale. (PHOTO: EMMANUEL SAMOGLOU) 20121834

The name Pukapuka is said to be derived from the Puka tree which is found in abundance on the island, while others say Pukapuka translates to ‘the land of little hills’ - a name given by the atoll’s first Polynesian inhabitants.

The island was also the focus of the book ‘The Island of Desire’ by American writer Robert Dean Frisbie, and has been called Danger Island - supposedly because of the treacherous waters near the constantly submerged Tema Reef, located about 23 kilometres away.

My first impression upon arrival and after seeing a dozen or so inquiring and smiling faces was an island devoid of critical deadlines and any sense of urgency. It was Monday morning but it could easily have been Sunday afternoon.

We were greeted warmly by Mayor Levi Walewaoa, the island’s Member of Parliament Tingika Elikana, and our local guide, a young man named Toa Dariu.

“I come up here to lower my blood pressure,” Elikana told me with a laugh, as I gulped down my first few sips of that sweet nu of the North.

The transportation truck was out of service, so our bags, less than 10kg allocated for each traveler, were loaded onto a steamroller which began inching its way toward the small harbour on the lagoon side of Motu Ko. We trailed behind on foot, and I took notice of the humidity and a thick carpet of sprouting coconuts on the ground amongst the palm and pandanus trees.

When we arrived at the harbour, I was immediately struck by turquoise green hues of the lagoon. Palm trees lined the shore, slanting at an angle into the lagoon. We hopped into a small boat and set off for Ngake village, which would be our base for the duration of our stay. We dropped our bags, wiped the sweat from our brows, and prepared for a lunch that included fried parrotfish, uto pancakes, and poke mangaro – which is much like traditional poke, but instead of pawpaw or banana, I was told this one was made using the meat from young coconuts.

Also on the table was taro papa, which is taro softened after being smacked and prepared with fresh coconut cream. I wanted to hug the kind people who were telling me to eat up and grab seconds.

With our stomachs full, I set about to explore the island and burn some calories to prepare for our evening feed.

With a duration of four days for our northern group tour, the itinerary included one night in Pukapuka, followed by a midday one-hour flight to Manihiki for two nights, and a final skip over to Penrhyn for a final night before heading south to the hectic and manic island of Rarotonga.

Organising travel to these remote islands is a logistical challenge. Tourism isn’t a developed and practised trade, and that’s part of the allure. The experiences are authentic and there is no script. I knew that possessing a sense of adventure and a will to go with the flow would serve me well.

Aware that time was of the essence, I struck up conversation with Toa to hear his story and learn about life on Pukapuka – which is closer to Western Samoa than Rarotonga and stands out culturally among the populated islands of the Cooks.

He had recently returned after 10 years abroad in New Zealand and Australia, having left to see what lay beyond the shores of the island of his birth. “I came back here to look after my parents and my family,” he told me.

“Most of my brothers and sisters are in Oz and NZ, that’s why I moved back. I have two kids, a one-year-old and a four-year old. I’d rather raise them here. I reckon Pukapuka is better. Everything is free. When you have a job, you get help. When someone needs it, you help them.” Guide Toa Dariu, who had returned to Pukapuka to look after his parents and is now raising his family on the remote atoll. (PHOTO: EMMANUEL SAMOGLOU) 20121832

It’s a refrain I’d hear often during this trip, of life being “free”.

And more often than not, the people I spoke with weren’t strictly referring to financial matters. It was a lifestyle they were referring to, and I wanted to learn more.

I walked towards Roto village observing Pukapukan life unfold: a group of men chatting around a digger while the giant piece of yellow machinery was doing the hard work, a group of kids swinging wildly on a rope tied to a coconut tree, a group of women joking and laughing loudly under the shade of a veranda, and a young man cradling what appeared to be an injured bird, trying to coax it to fly once again.

Pukapuka’s population is said to be climbing, an anomaly of the trend of depopulation seen in the Pa Enua. Currently estimated at around 450 people, island officials expect the population to climb to 600 by the end of 2021.

I was curious about this trend and asked a young man named Jeremiah Yawea who had never left Pukapuka if he wanted to travel abroad.

“Nah,” he said confidently, with no elaboration.

Even on this day with overcast skies and little direct sunshine, this island was a stunner. But there was obviously more than just a gorgeous landscape to keep people like Yawea there, while also luring Pukapukans back who had left years ago. Jeremiah Yawea grew up in Pukapuka, and said he has no desire to leave. (PHOTO: EMMANUEL SAMOGLOU) 20121836

The island appeared to be undergoing a sort of renaissance. Opposite the island’s jail, which appeared to be a converted concrete water tank, a new hospital was in the final stages of completion, and Mayor Levi Walewaoa told me there were plans for a new headquarters for the island administration.

“I want to lift up our culture and our people, that’s my plan,” he said.

Dusk hit and we were approaching the time for another feed.

Dinner arrived one platter at a time as a cavalcade of motorbikes approached our guesthouse, each bringing a dish for the table. I had read much about the island being operated as a commune, and our meal was evidently a communal effort.

As we ate, we were serenaded by a man singing a song in his native Pukapukan. I don’t know what he was saying, but our hosts seated nearby were all laughing out loud.

I woke up the following morning and hopped on a motorbike to explore more of my surroundings, driving along a beachside path with a long row of huts with Kikau roofs to my left, then turning inland to an array of taro swamps. Twenty-four hours after arriving, our time in Pukapuka was up. We loaded our luggage into the boat to head to the airport on Motu Ko.

I got on the plane, and once alone with my thoughts, I reflected on our visit to this unique and isolated island. There was so much more to learn about this place, so much more to see.

Once we were in the air, I pulled out Florence (Johnny) Frisbie's book, Miss Ulysses from Pukapuka, which I had tossed into my rucksack at the last minute.

I had no clue at the time, but Frisbie – who had travelled extensively throughout the South Pacific – wrote about a place called Matauea Point on the northeastern part of horseshoe shaped Motu Ko.

She reckons it is one of the most beautiful places she has ever seen throughout her travels.

Unbeknownst to me, moments earlier while walking to the airport, if I had made a slight detour and turned right and walked a few minutes, I would have been able to catch a glimpse of this place she writes about so enchantingly.

My lasting impression of Pukapuka is a place filled with hidden treasures, waiting to be explored by a few lucky adventurous souls, who will be hosted by people who openly express a deep love for their island.