Following in his father’s footstep 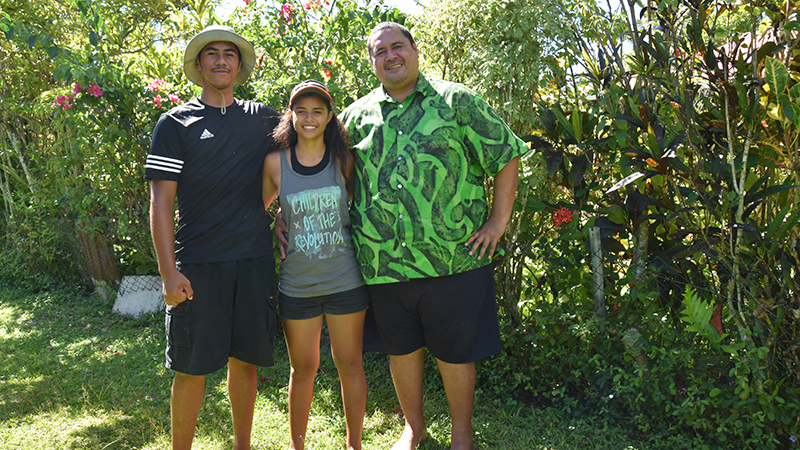 Food security, water storage and migration are among the issues Puna Vano will focus on as the new Executive Officer of Penrhyn.

Puna Vano grew up watching his father at work. The late John Vano was Penrhyn’s first Secretary (Executive Officer) in the 1990s.

Almost three decades later, Puna is following in his father’s footstep after taking up the island’s Executive Officer role.

One of Puna’s fondest memories growing up was following his dad around while the latter carried out his responsibility as the Secretary of Penrhyn island.

Vano, who considers himself “a bit of a fruit salad” due to his maternal and paternal links to Penrhyn, Rakahanga and Manihiki and Aitutaki, grew up on Rakahanga where he stayed for six years from 1984 to 1990. He went to school there with his four siblings.

In 1990, the Vano family moved to Rarotonga before his father took up the top job on Penrhyn in 1994.

“He was the first Island Secretary then (now called Executive Officer), he was there for three terms. That’s when they were trialling the devolution – giving the power to the local/island government to run their own affairs.”

In 1995, Puna joined his dad and brother going back and forth for about a year and a half.

He always had plans to return to Penrhyn and continue the work of his father.

“Only people from the north would want to go back to the north and for me it has always been part of my plan.”

Puna says when his father was alive and based on the island, he asked his wife, who is a school teacher, to move to Penrhyn. But other commitments kept them in Rarotonga.

Last year they decided it was time to go to Penrhyn.

His appointment as the new Executive Officer of Island Government played a big part in that decision.

Puna Vano has got a list of things that he wants to do for the people on the northern group island.

But first he has to present those ideas to the Island’s Council.

“I have done plans and details but Island Council will have to see it first.”

With the population of Penrhyn down to 250 (according to the last census), Vano says looking after the welfare of the people is the key priority.

He is basically looking at improving on three areas – food security, water storage and migration.

“A priority is food security. When it comes to seafood, we don’t have problem we have abundance of this. But the problem is food on the land and because of that we are dependent on having rice. The only fruit tree is Kuru/ breadfruit.”

He will be working closely with Ministry of Agriculture to improve the production of land-based crops.

Another key issue facing the island is water shortage especially during the current dry spell.

Vano says rain data shows the island gets the lowest amount of rainfall compared to other outer islands.

However recent rain has helped the island store water in the galleries recently installed by Infrastructure Cook Islands.

“But we don’t want to take and take from there. It will take years to replace it if it finishes, so we have to be careful, we will only use it for emergency.

“And so, we will work on our water storage, making sure any rain we get, collect it and store it. It is a long-term plan but we want to at least store enough water for up to a year.”

Vano says there have been a lot said about educating people in the Pa Enua on how to conserve water, especially after a recent dry spell which saw government sending water to Penrhyn.

However, he says those making these calls have no experience living on the island “because people in the Pa Enua are naturally talented in preserving and conserving”.

“They know how to read or look at nature and tell when there is a cyclone or bad weather coming. For example, when we see the crabs crawling up the coconut trees, we know there will be rough seas in two to three days’ time or when we see dolphins swimming close to the reef, going in a group we know there will be rough sea. They never go wrong. Even the signs of the fruits being abundant indicates something.”

Another major issue Puna Vano hopes to tackle is the migration of people from Penrhyn.

Vano says many have left the island seeing the lifestyle in overseas and employment opportunities but he hopes to bridge the gap and encourage people to tap into their natural resources to improve their livelihood.

Coming from a business background, Vano says there are a lot of natural resources surrounding the islands that can support the livelihood of the islanders.

“I am really looking forward to going. I have always wanted to take my children and raise them in the outer islands, learning the island way.”

Vano will be travelling to Penrhyn with his wife and four children including a daughter turning 17, and three young boys aged 15, 9, 7.

His eldest daughter, who currently works for Te Mato Vai, will be in Rarotonga looking after their family upholstery business.

Vano says he will carry his father’s advice with him when he starts his new role: “When you are managing something, don’t sit in your office and expect people to achieve the work you want especially when you have timeframes. You get up and be out there and be with them – and you will achieve these results.”

“I will do things one day at a time”.