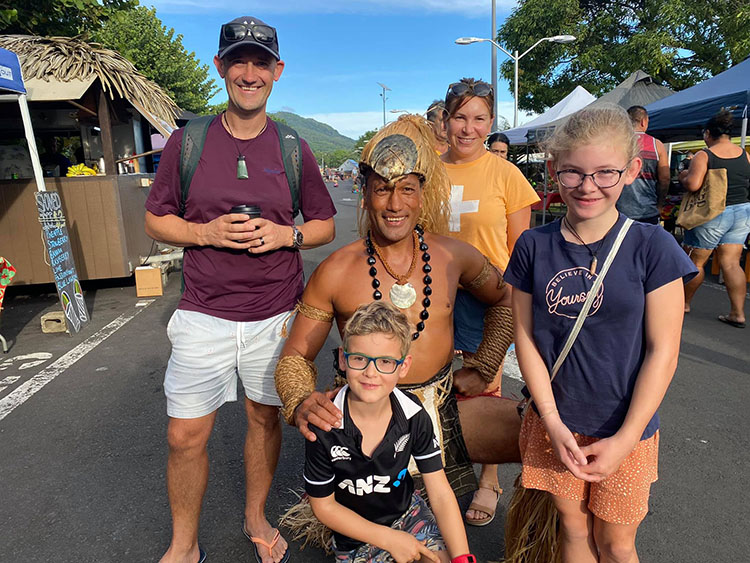 Parents, Richard and Sharon Spackman with children Sharon and Sienna at the Punanga Nui market - 21091049

A young New Zealand family’s plans for a worldwide trip is grounded before taking off due to Covid-19 lockdowns, bringing them to Rarotonga where they’re enjoying much comfort and stability.

The Spackmans were in Sydney in mid-March last year when they got the urgent call from their travel agent saying they needed to fly back to New Zealand right away.

New Zealand’s Prime Minister Jacinda Ardern had announced borders were closing and two weeks of self-quarantine would be the consequence for all that didn’t make the cut-off.

For the Spackmans, the news came at the infancy of a year-long worldwide trip that had been in the works since 2017.

The holiday referred to fondly by Richard and Sharon Spackman’s two children as “Our Big Trip” planned to take the family on an epic adventure through Europe and South-East Asia.

Harry (7) and Sienna (11) helped plan it; one of the places on the itinerary was Siena in Italy, chosen by Sienna for her name.

The Covid-19 warning bells began to ring in early 2020 threatening the trip to start with Italy but Richard and Sharon thought initially they would still be able to make it work.

The family lived in Timaru for the past eight years, a small town on the East Coast of the South Island with a population under 30,000. Richard ran a business there and says he planned the trip with Sharon so they could spend more time with the children.

"When you’re running a business it's hard to juggle that home life balance; your staff need you, your business needs you, your customers need you, and your kids need you,” Richard says.

“We thought the best thing to do was work hard and then plan to have a year out that we could spend solely with the children and not work."

Richard says the plan was to also leave Timaru and consider during the trip where they would live when they returned to New Zealand.

“We wouldn't go back to Timaru,” Richard says, “business was the reason we went there and we would find out where home was after that."

A couple of weeks after the family returned from Australia, New Zealand entered a full lockdown and the hope of going overseas faded.

“We thought at this point, what do we do? Do we just cancel everything?” Richard says.

After a bit of time grieving the family changed plans and set its sights on a domestic holiday, “Our Big Trip” turned into “Our Little Big Trip”. Instead of visiting Siena in Italy the family visited Harihari (for Harry’s name) in the South Island’s West Coast and busy European cities were traded for empty, tourist-free New Zealand beaches.

Richard says: "We would go to Waitangi, and there was no one there, like absolutely no one. You're sitting on the Waitangi lawn and it was just four of us just having morning tea, experiences that you will never get again.”

The Spackmans travelled from Cape Reinga to Stewart Island, visiting some of New Zealand’s less known spots like spending a month on a farm in Tiniroto on the North Island’s East Coast. Richard says for the children’s stability they tried to spend around a month in each location they went to.

Sharon, who has a background in teaching and Richard both homeschooled Harry and Sienna, taking turns with each child.

“Our main concern was keeping them on their (school) level and we had no way of measuring that because it's just up to you and them going back to school was going to be the nerve-racking moment,” Sharon says.

Richard agreed: “You worry they’re not keeping up with the maths, the reading, the spelling and stuff, but then travelling around they’re spending 99 per cent of the time with us looking at the world and asking questions around how does that work, why is this like this?”

As for Sienna, she says the homeschooling experience was “good, apart from the teachers!”.

When the Cook Islands’ borders opened in May this year, the couple decided to take their trip to Rarotonga. Richard says the move gave the family an opportunity to experience a different culture.

Sienna and Harry are now going to Apii Te Uki Ou, and did not fall behind academically.  Sharon also teaches there on a six-months contract. The family is part of the Muri Sailing Club, they volunteer walking dogs at the SPCA, and Richard helps at the Cook Islands Chamber of Commerce.

A month ago on the family’s “Our Little Big Trip” Facebook Page, a place where they provide trip updates, the family said life was beginning to feel normal.

The post said: “When we were traveling NZ we were moving every 2-4 weeks and it was full of newness. We loved the excitement that came with the constant change but it does take a toll, particularly on Sienna and Harry.”

“Having a permanent base (dare we call it home) gives us all so much comfort and stability. The kids are settled without being bored and us adults are finding ways to get involved and contribute to the community.”

Richard says he loved feeling like he was contributing to a community again living in Rarotonga.

“Travelling, you're so nuclear focused on the family and being here we feel like you can help.

“You feel like you’re actually making a difference, which is great.”

Among enjoying the normal day to day life in Rarotonga the family says the best day they had on their entire trip which included New Zealand, was a day on the vaka cruise in Aitutaki.

The Spackmans are leaving Rarotonga in mid-December and despite originally thinking they had left Timaru for good in early 2020, they are set to return. “We didn't think that was going to be the case but what we've realised travelling around is that there are these amazing places everywhere and I guess what makes it is the people, and we made a lot of connections in Timaru in our eight years,” Richard says.

“We’ve seen some amazing places that we love, definitely three or four where I would happily live, but to start again and make those connections is it that much better than where we were?

“So we’re going to head there (Timaru), Sharon will have no problem finding work, I’ve got no idea what I’m going to do but we’ll figure that out when I head back.”

Sharon says: “I think it comes down to home and wherever we are that is home, where the four of us are, it doesn’t really matter where we are.”

Sienna says she always knew the family was going to return to Timaru when they left. As for Harry, his Lego is there, so he needed to go back for that anyway.