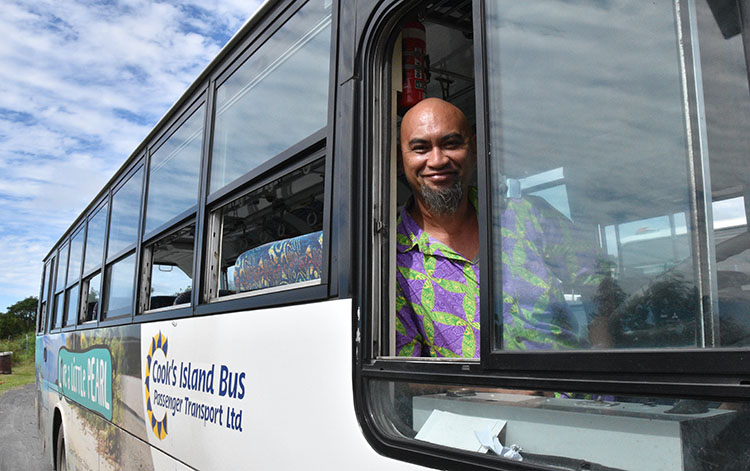 Bus driver Taomia Katuke is one of 17 staff who have been retained despite Covid-19 challenges. Staff often multi-task as the business is a one-stop shop for services, maintenance and repairs. 21060323

The wheels keep turning for the Cook family who have been providing public transport on Rarotonga for more than 30 years. Al Williams caught up with them at their Nikao operation.

It’s a family affair for the Cook family who have kept Rarotonga’s public bus service running despite obvious challenges over the past 12 months.

Kevin Cook established Cook’s Island Bus Passenger Transport in 1988 and grew the business to a fleet of 15 buses as tourism exploded.

The service provided a clockwise and anti-clockwise service on the island, school services, night buses, night life tours, and charters.

By 2020 visitors accounted for over 90 per cent of users.

The business employs 17 and has retained their services during the past 14 months.

“It’s been a struggle,” Kevin says.

At 73, he has no plans to retire, and is still involved in all facets of the business.

“I will probably be part of the business until I die.”

Cook landed on Rarotonga in 1968 and set about developing a commercial hub in Avarua during the 1970s which is still known as Cook’s Corner.

He started with a van, with the object of the exercise to get as many people as possible to Cook’s Corner to buy clothing, jewellery, books, and groceries.

“We wanted to attract visitors and we could do it by having a transport service that stopped at Cook’s Corner.”

Cook eventually let go of the commercial property arm of the business to focus on public transport.

The business evolved and grew.

His son Danny Cook is now at the helm alongside Kevin’s wife Frances.

Danny had been managing a retail operation on Rarotonga when he was “recruited” by Kevin and Frances several years ago.

“It wasn’t easy for him to come and work for us, but it is his future.

“We’ve had our issues, but that’s how family is.”

That family extends to the 17 employed in the operation, Kevin says.

“A lot of staff are multi-tasking.

“Our staff have stood by us through Covid-19; they took a drop in wages, like we did,” he says.

Danny is co-leading a $120,000 project aimed at making Rarotonga’s passenger bus service smarter through the use of technology which is set to be rolled out in the coming months.

The bus company, with the help of funding from the Ministry of Finance Economic Management, is switching to electronic ticketing, including a card-based system, online payments, payWave options, and an app providing ‘real time’ ticketing and bus information, and related back-office support systems.

Danny says the estimated project cost is close to $120,000 and will be split with both groups contributing about 50 per cent each.

“The project is expected to roll out slowly over about six months, allowing us to fine-tune the operations.

“We are in discussions with an international supplier of both the electronic ticketing machines and the bank office software,” Danny says.

The aim is to purchase the equipment by August, he says.

The MFEM funding will help cover the cost of the equipment purchase while the bus company will cover software and back office costs.

“The electronic ticketing machines will be equipped with NFC and QR code readers for use with multi trip tickets and smart card boarding.

“Built in GPS will work with back office scheduling software to provide real-time updates to our schedule, which will be available via an app.”

The main target of the upgrade is the local population, Danny says, which includes free bus services for senior citizens, and persons with disabilities.

“The upgrade will remove the need for the 10 ride tickets currently in use, making it more convenient, resolving the issues of loss of tickets and rides.

“We are still in the early stages and continue to work towards the eventual upgrade to both our equipment and service.”

The anti-clockwise bus route around the island was reinstated on Monday, departing Cook’s Corner at half past the hour between 8.30am and 4.30pm on weekdays and 8.30am to 1.30pm on Saturdays.

The anti-clockwise service ceased in April 2020 due to the effects of Covid-19 and the border closure.

“Due to the opening of the travel bubble and the now increased number of visitors on the island in the past two weeks, we have seen that there is an increased demand for our public buses.

“Now is a perfect time to reinstate the anti-clockwise service as we expect to see a further increase in visitors with the increasing number of flights.”

Cook is looking to reinstate the night bus in July with a proposed last departure time of 10pm out of town.  “This could be brought forward if demand increases.”