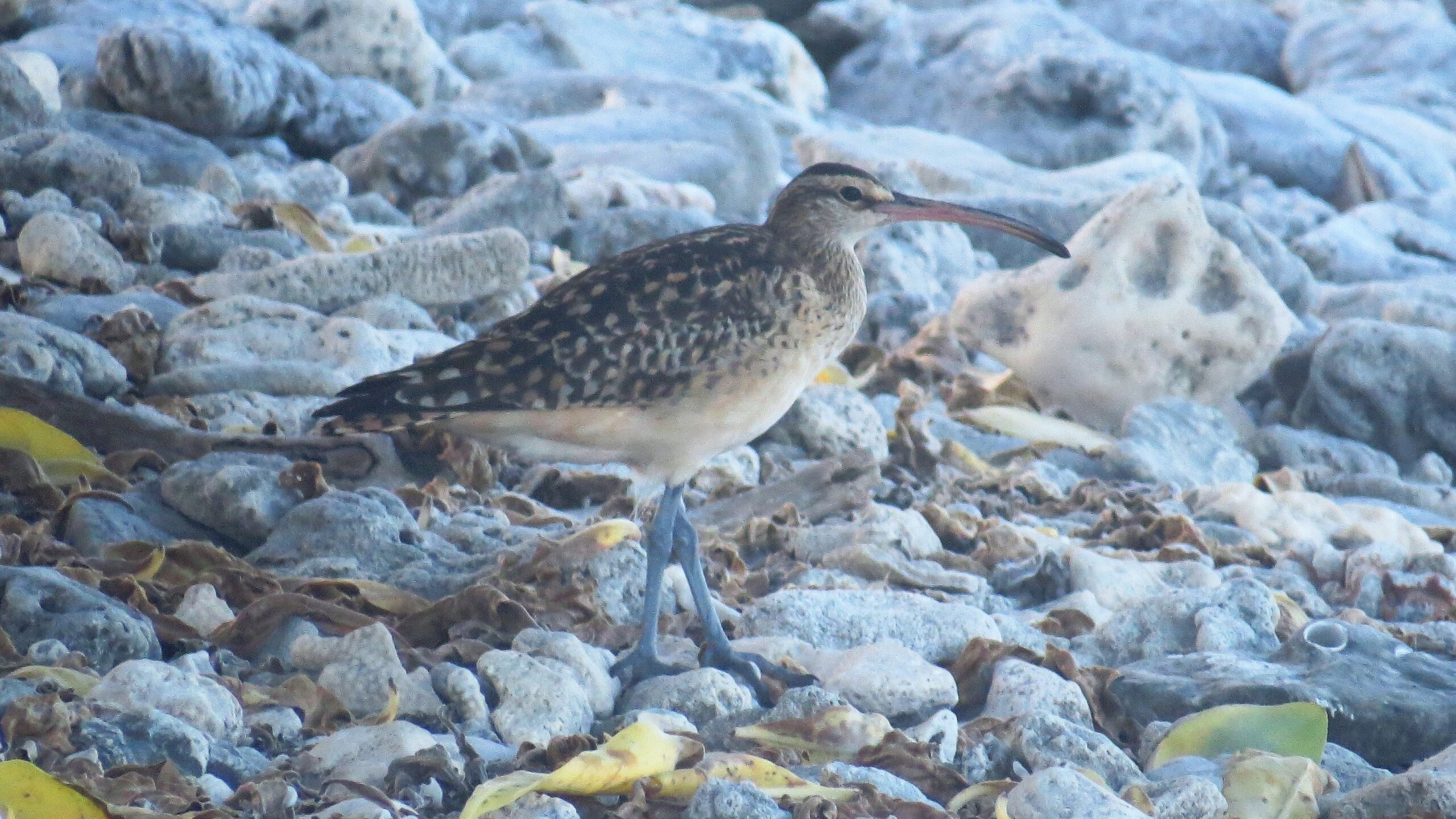 A well-travelled visitor to the Cook Islands, and one of the migratory birds to celebrate today, the Teue, Bristle thighed curlew. Photo: SUPPLIED/22051305

Today is World Migratory Bird Day – a day to draw attention to those migratory birds that are found here in the Cook Islands and the incredible journeys they have taken to get here, writes Te Ipukarea Society.

It’s also about raising awareness about threats our migratory birds are faced with today.

Migratory birds are well known for travelling vast distances across open oceans, clocking up distances that range anywhere from hundreds, to thousands of kilometres.

The Cook Islands is visited by a variety of migratory birds during our summer.

Our coastline and open grassy areas provide food favourites for these well-travelled birds and include a buffet of crustaceans and small fish found along the shoreline, or crunchy, slimy invertebrates found on grassy sites.

These birds have come from the arctic region, in the vicinity of Alaska, where they breed and nest, then make their way to the Pacific to feed.

That’s around 8500 kilometres of travel, around seven to nine days of flying.

This long stretch of bird highway is better known as a ‘flyway’.

There are a number of different global flyways for migratory birds.

But for our summer visitors, they use the mid-Pacific flyway.

Perhaps you may have seen a couple of these short-term staycationers over our summer.

The Pacific Golden Plover, Tōrea, is small in size but don't let that fool you. These guys have travelled from as far as Alaska, around 9000km, three times the distance from Rarotonga to New Zealand.

The Torea are commonly seen on open rugby fields here on Rarotonga, scooping out the green space for small invertebrates.

Torea are found on all of the islands across the Cooks, often seen on the airstrips.

They are usually seen between September and April, but some extend their visits.

The Wandering Tattler, Kuriri a shoreline bird that has travelled from as far as Alaska, or northwest Canada.

Some of them make a pit stop in Hawaii to recuperate before continuing on their way, but it's not uncommon for the birds to fly non-stop.

That's around 12,000 km of mostly open ocean, nine-days flight time to the Cooks.

The Bristle Thighed Curlew, Teue is another shoreline bird that can be easily identified by its long hooked beak used to dig into soil or mud for invertebrates, and also eats berries.

Listed as near threatened in the IUCN Red list, threats to this species include ground predation by exotic mammals in its winter nesting grounds. Not ideal, especially when the Teue is unable to fly for some time during the winter season, when it moults its feathers.

It is the only shorebird known to have this flightless characteristic.

The Teue is yet another well-travelled visitor from the Arctic region.

The Long-tailed Cuckoo, Karavia, is another migrant visitor, this time coming up from New Zealand.

This bird is known to fly around 80km/hr, and would cover the distance from New Zealand to Rarotonga in around two days.

They usually arrive around March, and you might see them in trees on Rarotonga, and in fact probably any of the Pa Enua, as they are widely dispersed.

We have even seen them in Suwarrow. They are a bit cryptic however, and you are much more likely to hear them than see them.

They head back to NZ to breed, arriving in October and November.

This year's theme for World Migratory Bird Day is light pollution and its impacts on migratory birds.

Every year, light pollution contributes to the death of millions of birds.

Artificial lights at night, particularly when there is low cloud, fog, or rain causes migrating birds to become disorientated, causing birds to circle the illuminated site, exhausting the bird which can then be at risk of attacks by cats, dogs, or crashing into buildings.

One action point you may consider taking part in to show your support for Migratory Bird Day, and being a part of the solution to reducing light pollution includes taking part in the Dim the lights for Birds at Night initiative where households and businesses turn off their lights from 7pm to 8pm.

A bit like Earth Hour, so you will also be contributing to actions which reduce greenhouse gas emission and power-saving costs.