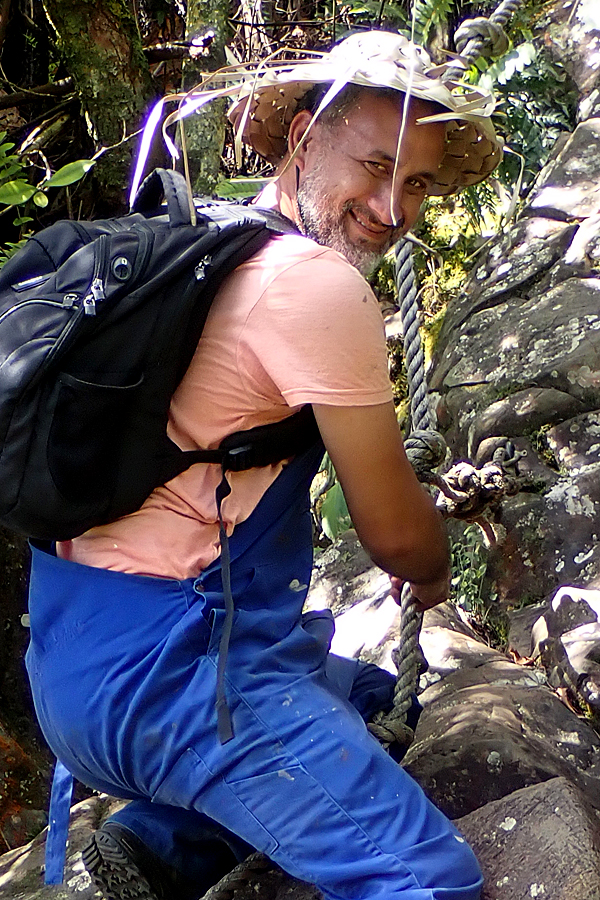 Joseph Brider on one of his many mountain hikes. Photo: Gerald McCormack/ 22061012

It was an immense loss for the country that Joseph Brider was taken when he was just three years into his life’s work.

It was a work that would have been profoundly useful to all those with an interest in the conservation of Cook Islands biodiversity and the associated traditional knowledge, writes Gerald McCormack, former Director, Natural Heritage Trust.

Rarotongan Joseph Brider died unexpectedly at age 41 on the 1st May, after a hike up Tāputārangi (Tereora Hill). He was a keen hiker of the inland, which is the biodiversity treasure house of the Cook Islands.

On that fateful day, he and a friend went to look for a few interesting plants. One was the uncommon and little-known shrub ‘Ākē (Dodonaea), which grows on rocky outcrops on the drier mid-elevation ridges, especially on Tāputārangi. This native plant is very widespread in Polynesia, including New Zealand, where it is known as ‘Ake‘ake. Within the Cook Islands it is also on Rangimotia on Mangaia where it is uncommon and its name is pronounced as ‘Ake.

The other plant was much more mysterious – a real Joseph delight. This was the Mountain Wisteria which has no known Māori name. Botanists have usually concluded it was introduced since LMS times. However, in the 2016 Cook Islands Flora, new evidence of its presence on two islands in French Polynesia led to the conclusion that it is locally a native plant. It was first recorded as common in 1899, but is now rare and localised, being known only in small areas on Tāputārangi and Maungatea. It is native in PNG and Queensland, and on a few widely separated islands in the South Pacific: Norfolk, Rarotonga, Mangaia, Raivavae (Australs) and Mangareva (Gambiers). It is obvious why such a controversial plant would attract Joseph’s attention – in particular, why has it become so rare, and will it soon be locally extinct?

Joseph was known as an obliging and studious student at Tereora College. He completed his Bachelor’s degree at USP in Fiji and joined the National Environment Service (NES) in 2003. He was initially in the Compliance Section where he made a major contribution to the procedures. In 2007, the Director, Vaitoti Tupa, arranged financial assistance enabling Joseph to attend the University of Hawai‘i for his Master’s, specialising in botany. He also spent a lot of time studying the Cook Islands Natural Heritage Trust’s biodiversity database, and he emailed me to say some of the Latin names for plants were out-of-date. His drive to acquire the latest scientific information was what made Joseph an excellent researcher and, eventually, a major contributor to the national biodiversity database.

Upon returning to Rarotonga 2010, Joseph slipped back into NES, moving quickly up the ranks to be the Director in September 2015. Which, incidentally, was the same year he joined up with the love of his life, Emilie Pierce. Emilie was very supportive of Joseph’s social and academic pursuits. She shared his work with garden plants, and often accompanied him on inland hikes, including one to the top of our highest mountain, Te Manga.

Joseph had a great rapport with his staff in NES, as well as extensive administration skills. One of his key administrative achievements was leading the development of the US$4 million Ridge-to-Reef programme funded by the Global Environment Facility (GEF). This programme implemented a wide range of environmental projects. He also started assisting Ian Karika in the Takitumu Conservation Area, which included working with ornithologist Hugh Robertson on the biennial census. Joseph became a skilled catcher, handler and bander of the Kākerōri.

Joseph’s promotion in 2015 to the highest NES salary would eventually open the doors to ever more lucrative administration positions, both local and regional. However, hidden in this successful administrator there was a researcher awaiting. In 2019 Joseph stepped way down financially to take up his vocation as a researcher and educator in the Natural Heritage Trust.

The Cook Islands Natural Heritage Trust is the only Government agency in the South Pacific with the singular objective of researching and preserving scientific and traditional knowledge of a country’s plants and animals. While it puts out some publications on biodiversity, it’s central task and output is the national biodiversity database, which has basic information on 4500 species, marine and terrestrial: shrimps to whales; fungi to flowering plants; and mites to mammals. This is the only extensive species-based biodiversity database in the Pacific Island Countries (PICs) and it underpins all ecological conservation programmes.

When Joseph joined Natural Heritage, he was already flying with an incredible knowledge of everything in the database, and he moved rapidly to checking and updating the classification systems for fungi, ferns and flowering plants – an immense technical task. He moved into photographing unrecorded species, and editing them for identification purposes in the database. Although it is a complex scientific database, it is heavily oriented toward photographs of each species to enable laypeople to identify the plants and animals they see. Presently, about 2500 species have identification images, and Joseph was pushing this ahead with better photographs to replace less useful images and new photographs for species without an image.

While the Trust’s species database is usually described as a biodiversity database, that is only half the story. The Trust records traditional or ethnic information on local plants and animals, which includes the Māori names from each island using modern orthography. Above, we saw that the plant Dodonaea is ‘Ākē on Rarotonga and ‘Ake on Mangaia. The detailed orthography enables a person not familiar with a particular Māori name to pronounce it in the localised manner.

In less than two years, in January March 2021, he was appointed the Director of Natural Heritage which did almost nothing for his salary, but moved him into a better position to build the Trust into a more effective collector and propagator of knowledge about local animals and plants, marine and terrestrial.

Joseph organised many expeditions to look at the general distribution of montane biodiversity, and more specifically, to find the rare plants and animals. We were fortunate to have great hiking companions, such as Kirby Morejohn, Andrew Logan, Brennan Panzarella, Bruce Goldsworthy, Liz Munro and Jacopo Dozzo. Many eyes!

Several high-level expeditions were organised to find a rare fern-relative (Phlegmariurus ribourtii) known only from Tahiti and Rarotonga. Although it has no international vernacular name, we will call it Ribourt’s Lycopodium, after the man who first found it in 1850 on Tahiti. On Rarotonga it had been found only once – in 1929, despite many subsequent searches.

It is easily confused with another quite common lycopodium growing on tree branches in the mountains. The two species differ in the cross-section of the fertile part of the frond, with Ribourt’s plant being 4-angled rather than round. After a couple of disappointing high-level hikes, Joseph’s persistence was rewarded in November 2021 near the top of Te Ivi Motu, the high ridge between the Tūrangi and Avanā catchments. It was a strenuous but rewarding hike.

Joseph worked alone, and also with botanist Anthony Wright, to discover unrecorded plants on Rarotonga. This mainly involved searching on the lowlands for recently introduced weeds, along with visiting many gardens to ferret out previously unrecorded ornamental plants. While ornamental plants are often dramatic in colour and form, they can be notoriously difficult to correctly identify because breeders have crossed many different species to obtain new forms and colours. Joseph was an expert user of online scientific papers and identification keys. His work in this area will add about 80 plants to the biodiversity database.

After joining Natural Heritage, Joseph was increasing his outreach to teach others about our biodiversity. He assisted in fieldwork with youth groups such as Pathfinders, and he worked with adults to increase their knowledge of local plants and animals. He initiated and ran a popular Facebook page on species he selected randomly from the biodiversity database. Although trained as a botanist, he was driven to learn about all the plants and animals of the Cook Islands.

It was an immense loss for the country that Joseph was taken when he was just three years into his life’s work, a work that would have been profoundly useful to all those with an interest in the conservation of Cook Islands biodiversity and the associated traditional knowledge.

He was a great colleague, full of humour and seriousness. Now, sadly missed.