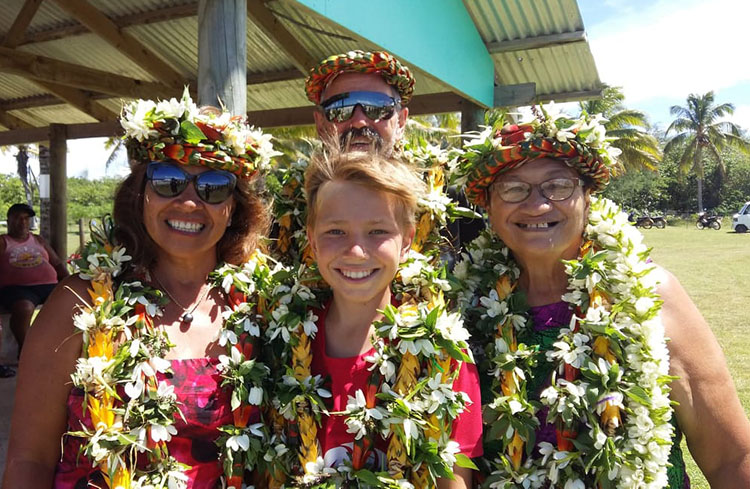 Tere Carr, husband Mike, children Kiva and Maeva, and mother Rongo Preston chose to spend the Christmas break on Mauke, a place she had last visited in the early 1990s.

Because of Covid-19, for the first time the Carr family from Titikaveka could not spend Christmas together as two sons Tamatoa and Mana live and work in Aotearoa.

She shares with us her Mauke memories, discoveries and simple pleasures she holds precious.

“Since we were going to be apart as a family, we decided to go to a Pa Enua for a change,” says Tere.

Over the past 20 years, Tere has discovered more about her Ngati Porou heritage which comes from her paternal grandmother Mere Arihi Kaihau Hale aka Alice Virginia Hale.

“This beautiful lady of Ngati Porou descent was married to my grandfather Tamarua Joseph Browne. On several trips to my grandmother’s whenua located at Kennedy Bay, Coromandel, Aotearoa, I learnt that the Ngati Porou iwi descended back to Paikea who came from Akatokamanava, Mauke.

“I also learnt that Great Mercury Island which is directly out from Kennedy Bay, was where Paikea first landed and that it was him who called it Ahu; close by is the town of Manaia.”

These names evoked emotions in her as they are similar to the island of Mangaia, and its other name Au Enua.

“So as a destination, Mauke was high on my list as I wanted to find out more about Paikea’s ancestral heritage.”

The timing of her trip was ideal, the islands traditional practice of rangokere and festive events would be taking place.

She was blown away by the experience.

The Carr family stayed in Kimiangatau; a neighbour had a truck and was driving to Oiretumu to collect baskets of food, Tere and her mum went along.

“We were amazed at the households who had spent all night preparing gigantic kits of food holding pigs, crayfish, tuna, taro, kumara, boxes of chicken and other cooked local delicacies; the people were so generous in their giving, we had never seen anything like it.

“It was very special as I saw first-hand the ‘ngakau aroa’ of the people of Mauke.”

People had been generous to the Carr’s from the moment they arrived – delivering whole tuna, pineapples, mangoes and tomatoes to their accommodation.

“But the rangokere was generosity and giving at a completely different level; people gave their very best and were so happy in doing so.” Driving a motorbike in the rain without the restriction of a helmet, she followed the trucks escorting the baskets of food to the Kimiangatau CICC Church.

The singing and dancing continued as the baskets were unloaded and inside the hall. “It was just beautiful.”

“These customs which I was completely unaware of, portrayed a people who are generous and unpretentious in their giving to each other.

“The people of Mauke make the island and they are so carefree and not weighed down by having worldly possessions.”

Although Wi-Fi came and went (mostly went), she saw very few children playing with tablets and phones for hours - unlike children on Rarotonga; “and at the end of every day, apart from Sunday, people enjoy swimming at the harbour  with everyone.”

Tere and her mother joined in the ‘roni’, and felt the experience was “such a treat”.

“We joined the Kimiangatau Imene Tuki practice and sang at the historical Oiretumu CICC Christmas service - the singing by both oire (village) was sublime.

“I have never sung an Imene Tuki, so Mauke will always be special to me for that reason and we also had the best tumu imene, my cousin Tepaeru Samuela.”

A hundred people from Kiniangatau then gathered at the Oiretumu Sunday School Hall ready to start the roni.

She was overwhelmed by the tradition of welcoming people into different homes to devour food and drinks specially prepared and laid out.

“We walked from home to home in Oiretumu singing, laughing and enjoying a traditional Christmas that was the very essence of Christmas.”

The moments threw her back to Christmas in Rarotonga some 50 years ago, when it was about Muri beach, playing and eating with relatives – and no purchased presents, “just enjoying the sharing of food amongst ourselves while our uncle’s fished”.

She feels that Rarotonga has lost many of our customs due to the Western influences.

“The fact that Mauke still practices this tradition and that it is unknown to us in Rarotonga is astounding; yet that is what custom is – doing something that represents a connection to our past which evokes memories of our Pa Metua who have gone before, who also practiced the same tradition - It was just beautiful.”

And what was most special to her about Mauke?

“There is so much - it’s the people first and foremost, they are the islands greatest asset,” says Tere.

“Mauke has spectacular views at each cove, the freshwater and sea caves, the harbour for evening swims and the various walking routes in the morning with the fragrance of tipani, pitate and tiare Maori planted along the roads in the middle of nowhere.

Tere walked the 16.9km around Mauke in 2 hours 45mins and says, “I could get really fit and healthy there by simply enjoying nature”.

“And there is the delicious underground and untreated water, so pure and untainted, even when there were days of torrential rain.”

The family were treated to feasts by Kimiangatau, and later Oiretumu on the morning of their departure.

Tere’s journey to Akatokamanava was also to discover more about Paikea.

Another special moment she holds dear is meeting school teacher Ina Dyer who enlighten her about Paikea.

“Of course, all of Mauke knows about Paikea because he’s from Mauke,” Dyer told Tere.

Dyer began talking about Paikea going fishing and being washed out to sea by a freak storm out from Anaiti Cove, “he did not make it back to land and was never seen again”.

They believed that the storm drove him directly south of Mauke to Au Enua (Mangaia); his wife Kea was so heartbroken, she sat and waited for his return and eventually died frozen to the spot from where she last saw him fishing.

Tere says: “As she was telling me the story, I got goose-bumps everywhere, she asked me if I was a descendant of Paikea?”

“I replied ‘yes, through my grandmother’”.

She says Dyer wasn’t surprised because people descended from Paikea got goose-bumps when they hear the legend for the first time.

“She then said, ‘Welcome home, you are not a stranger, you are a true Maukean’ – that was so special.”

Tere saw the sites of Anaiti Cove and Te Rua o Kea (burial place of Kea) and learnt more of the tupuna of the Ngati Porou iwi.

“I walked the same makatea that Paikea walked – it remains untouched to this day. It was an emotional experience to look out over the vast Pacific Ocean horizon and to imagine that a warrior from Mauke was guided by whales, landing in Aotearoa, and eventually fathering a huge Ngati of his own, including my grandmother.”

Anaiti Cove is where the whales come to play in Mauke, she wants to return to that special place during the whale season.

“Being in Mauke, really felt like going home for me … how privileged are we that this beautiful paradise is virtually on our doorstep.”