Age does not matter when God has plans for you, says ordained Reverend 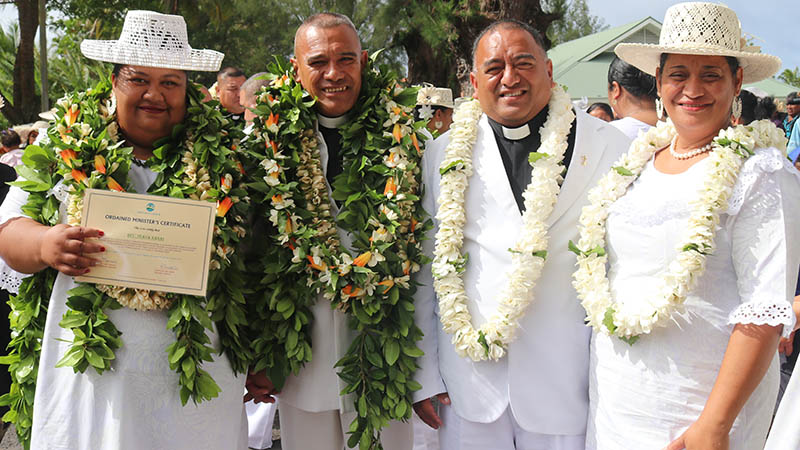 Hard work and sacrifice are the keys to success in any vocation, but commitment to faith and God will give rewards in life that are priceless.

Fifty-three-year-old Teava Nanai has spent his life going to church from Sunday school service, to youth group and weekly sermons.

But for the past four years, Nanai says he got closer to knowing and understanding God’s word and God’s work and plans for his life.

Nanai, now ordained as a church minister, was among 20 Takamoa Theological College students who graduated last week with a Certificate in Bible Studies and Diploma in Theology.

Nanai was born on Mangaia and raised on Rarotonga.

In 1987, he moved to New Zealand and after nine years returned to Rarotonga working as a fire officer at the airport. In 2003 he moved to Melbourne and he attended the Cook Islands Christian Church in Dandenong.

Nanai says, with the church in Australia he gradually started working with young people.

“We sort of had a passion to help our own Cook Islands young people. We would use our home as a meeting place for our young people to come, and we would go out on road trips and on Sundays we would bring them to church, he says.

“That was the driving force for us members of the church, working with our young people.”

It was not until 2016, when Nanai attended a youth convention in Mitiaro and met Reverend Tere Marsters.

“At that time, I expressed to him I wanted to come to the college, and it was then that the former principal said I could come and sit in one of his classes and see how things go on - and I did that.”

When he returned to Australia, he shared with his family what God had put in his heart and the new direction and calling of his life.

Married with three children, Nanai and his family through the Australian CICC, were sponsored to attend the Theological College.

It wasn’t easy, his four years of study were a challenge.

“It is a sacrifice we had to make, everything we knew and had in the world was how we had our life, but when you come here it is a sacrifice, and those things you can’t have them in here,” Nanai says.

“When you come here (College), this place changes you and that’s what we found - in terms of our spiritual development, the studies we did helped a lot.”

One of the perspectives he had was that he knew the Bible, but he says: “You don’t know the bible until you come to a place like this. Because this place teaches you the deep meaning of the Word.”

His four years of study have been rewarding because when he got to graduation and looked back he thought of how much God had instore for him and where God was going to take him from here.

“I thank God for this opportunity.”

Nanai’s favourite scripture is: “Remember thy creator in the days of thy youth.”

And he encourages young people to’ know who your God is’.

“Because when you have that strong relationship with God then he will reveal to you what He has planned for you.”

He says: “Being in Takamoa is a privilege because of the legacy of this place. Our ancestors took the gospel from here to the South Pacific and for us to come here is an honour.”

“Age don’t matter, if God has a plan for you he will fulfil it.”

Nanai received the first runner up Dux and Homiletics awards at the graduation ceremony.

Twenty- four students will be joining Takamoa Theological College next month to commence their next three to four years of biblical study beginning 2021.

This year, the College has had two separate graduation events with 24 graduating in February and another 20 graduated late last month.

Ten of these graduates were couples and were ordained as church ministers at the Cook Islands Christian Church, Avarua after the graduation ceremony.

Reverend Marsters says these were students from Australia, New Zealand and one from Rakahanga.

Another 24 students will be joining – some are from Australia and New Zealand while five are from the Cook Islands. Three are from Rarotonga, one from Aitutaki and one from Mitiaro. They will commence their four years of study at the beginning of next year.

Those that recently graduated will return to their home churches, or the church that sponsored them for their study awaiting their posting.

“Some have indicated they want to stay on and finish their Bachelor in Theology, and will commence their study by writing a thesis,” he says.

“The study is close to four years and the programmes are accredited through SPATS – the South Pacific Association of Theological Schools based out of Fiji under the Pacific qualification frame work.

“We are pleased that our students leave with a qualification that is recognised within the Pacific region and New Zealand and Australia - it’s good for them - should they wish pursue a minister’s licence.”

Several special awards ranging from the studies and trophies for special key subjects were given out on graduation day including the Honorary Doctorate of Ministry Award to Reverend Temere Poaru.

Reverend Marsters acknowledges the Cook Islands Methodist Church for the catering and cooking and the choir numbers shared on the day, as well as the Pa Enua churches for their contribution and the faculty of the school, the CICC and the executive council for their support over the years.