A life on the water: Setting sail on Serenity 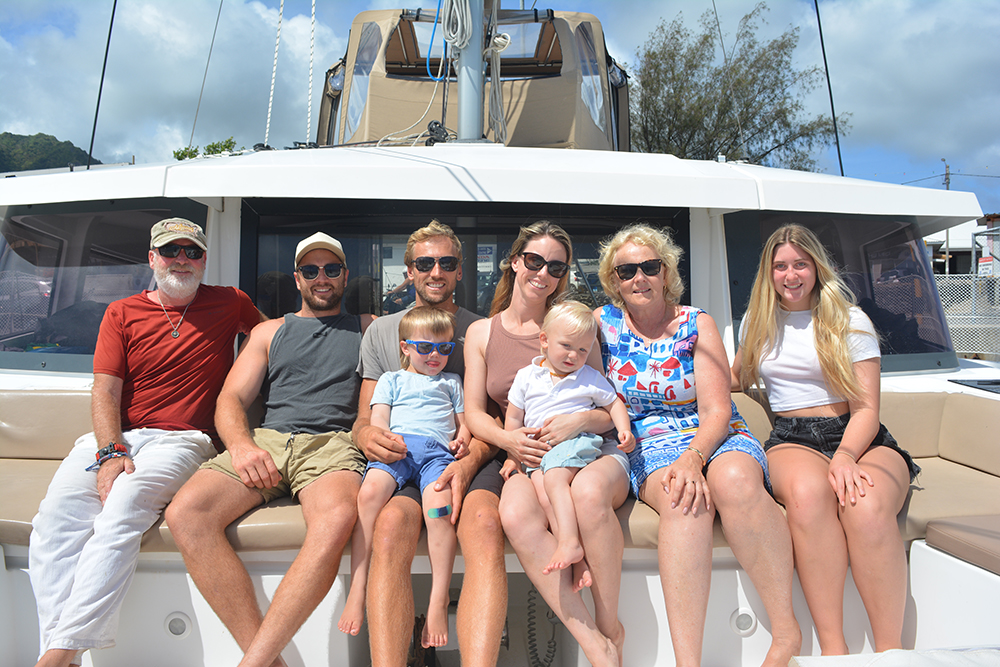 Kiwi skipper Scott Farrand has lost count of the countries he’s visited, although it’s his first time in the Cook Islands. He is aboard one of several leisure yachts docked at the port in Avarua.

It’s been a long and arduous trip through treacherous waters at times. Farrand, an experienced hand, takes it all in his stride.

He’s docked in Rarotonga for a few days before setting sail on Serenity, bound for the Bay of Islands, in New Zealand.

She’s a 45-foot catamaran he bought out of Greece.

He plans to operate a charter out of the Bay of Islands.

It’s a change of tack as he was captaining superyachts – but Covid-19 brought that to a halt.

Farrand managed to get back to New Zealand in July 2020, then border closures happened.

He bunkered down in New Zealand with his family and took his hand to farming kiwifruit.

It was big change in lifestyle after more than two decades working at sea.

He grew up on the sea, starting in optimist and P-Class yachts.

“I moved into kiwifruit, did that for 18 months during Covid-19, after 18 months, I found I missed the sea.

“I thought, how can I use my profession, based on land, so I set about buying a catamaran and starting up a charter company in the Bay of Islands.”

He searched the web for about six weeks.

Farrand then flew to Greece and was joined by a former colleague before setting sail.

It was meant to be a tight schedule, but they hit a number of bumps along the way.

It was June and the start of hurricane season in the Atlantic, but there was “quite a process of paperwork” in Greece to complete first.

“Everything (in Greece) is very slow.”

They sailed the Mediterranean, down to the southern coast of Spain, and made the Atlantic crossing near Gibraltar.

It was June 3, “right on hurricane season”.

“We had a good crossing, we went to an island just off Portugal and gathered our last provisions on June 8.”

Farrand has his diary on him during our conversation and regularly checks it for details – he has also kept a record of the journey on his Instagram page, sailingserenity.nz.

He has maintained a crew of at least three for the entire journey.

His family flew into Tahiti a couple of weeks ago and sailed with him to Rarotonga, then flew back to New Zealand this week.

Back on the Atlantic, it was a wild ride as the yacht hit a six-metre wave near the Caribbean.

Farrand was asleep, below deck, it was the middle of the night, when he heard a crew member, on watch yell.

Farrand broke his toe on the way up to the deck.

“I was in the cabin and heard roaring, I raced up to the fly-bridge, broke my toe, just as the yacht was nearing 19.7 knots.”

He says it led to the seizure of an engine on the starboard side of the vessel.

Then the portside engine seized up.

The drama would lead to a seven-week delay in Saint Lucia, as there were hold ups in the shipping of parts.

“A lot of it is a game of patience, the wild fires in France delayed parts.

“We got both engines running, you have to have engines to go through the Panama Canal.

“It was my first time through the Panama Canal, it was great, probably the highlight of the trip.”

It took two days to cross through the canal.

Farrand tied up for a night and met another Kiwi sailor, who had picked up a yacht in Portugal, and been sailing the world for two years.

Once through the canal, it was on to French Polynesia where it took several days to get customs clearance.

His wife, two sons, their au pair, his brother and Mum, met the yacht in Tahiti.

Now in Rarotonga, he laughs, “it’s the only country I haven’t been to”.

Farrand estimates he’s been to 50 countries during his years at sea.

“I grew up on sailing boats, we cruised the Pacific.

With young children, he says, it will be easier, being able to be based on land, and operate charters.

“I will learn a bit more about game fishing.”

In terms of sailing on the open seas, he says it pays to be prepared.

“You only have what you have on board.

“You have to prepare yourself for every situation.

“You must make sure your crew are well informed, and be well aware of weather conditions.”

“Be prepared in advance, monitor fuel and water supplies, and make sure the boat is sea worthy.”

He encourages budding sailors to “get out there and get as much experience on shore as off shore”.