Reiner’s declaration of love for Raro 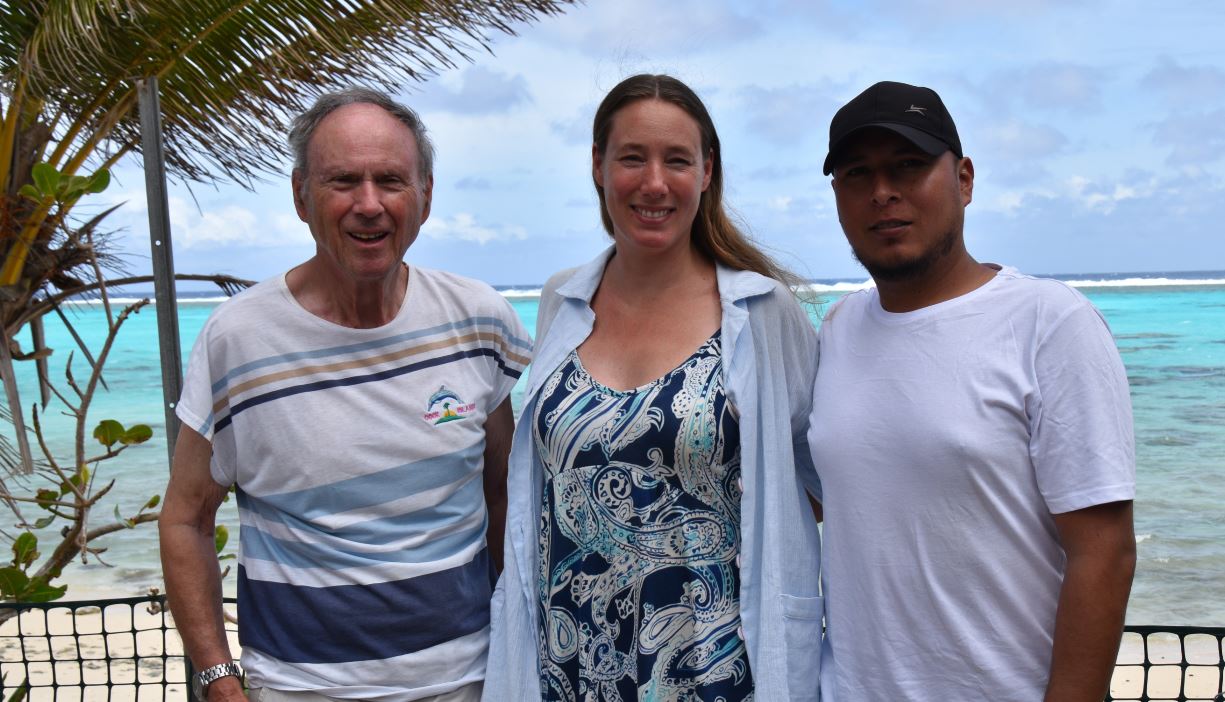 Reiner Gatermann’s love for Rarotonga has brought him back to the island an incredible 21 times. He chats with senior journalist Melina Etches.

The 80-year-old, who is from Stockholm, Sweden, is visiting the country for the 21st time.

“Rarotonga is my second home.”

This time around his wife Elisabeth didn’t make the trip. “She stayed home this time and doesn’t like travelling too far,” says Gatermann.

However, his daughter Silke and her partner John Freddy Lopez have joined him.

To get to Rarotonga, Gatermann flew from Stockholm to Frankfurt, Singapore, Auckland where they stayed for three days to catch up with friends – whom they had originally met in Rarotonga – then on to Rarotonga.

“For me it is a long time and many flights to get here I have to admit. But, I have a goal, I have to suffer something to make an effort to get there, but then the compensation is fantastic.”

Gatermann is a retired journalist who had worked for a West German newspaper, and has written several articles on the Cook Islands, including the Manihiki pearl industry.

In 1983 while visiting Rarotonga he interviewed Sir Tom Davis and his article appeared on the front page of Cook Islands News.

He still has newspapers, photographs, memories and friendships he and his family have forged since first arriving to Rarotonga in 1979.

“Rarotonga was untouched when we first came, cars would stop on the road and pick us up for a ride to Avarua.”

His first sightseeing trip was on a horse drawn buggy owned by Exham Wichman. Gatermann shares Wichman was only allowed to go on his own land because his neighbours wouldn’t allow him to take tourists on their land.

“Exham gave us lots of carvings and drums he made himself that we still have, the ukeleles are on our wall at home.”

Gatermann delightfully recalls a conversation he had with Wichman’s father who was nearing his 90s at the time.

“He would sit under the tree, once, I asked him ‘Are you not longing for other places, to leave the island, and go to Hawaii’.”

Papa Wichman replied, “I know why you people come to us…” recalls Gatermann, realising he was content where he was.

Since their first meeting, the Gatermanns and Wichmans remained in touch.

In 2019, while Silke was working for International Red Cross in Cameroon, Africa she flew to the Cook Islands to Atiu to attend one of the Wichman family weddings.

Another friendship he forged on Rarotonga is with Raymond Pirangi.

He recalls Pirangi’s great efforts to get the Highland Paradise completed, and was invited to his investiture ceremony.

Gatermann has always taken note of the changes in the landscape, businesses and infrastructure on the island.

“In hindsight, the Cook Islands were lucky they got their airport this late (opened in January 1974), when all the others already had their routes through to Tahiti, Fiji, etc. Look at them now…

“Here it started really slowly, what surprised me now is the number of beds, which must have increased enormously,” he says.

“When Des and Cassey (Eggelton) opened Lagoon Lodges, we stayed there until their last year.”

In 1980, on their first trip to Aitutaki, they stayed with Mrs Cameron “the widow of the headmaster, a really nice old lady,” he says.

They stayed at the Rapae Hotel and at Akitua Resort when it opened.

On one of their trips to Aitutaki while waiting to return to Rarotonga, they were asked kindly to stay for a few more unexpected days.

“We were asked to stay behind because it was more important to send the bananas and coconuts to Rarotonga than tourists. We didn’t complain at all,” recalls Gatermann.

In 1981, November 11 to be precise, the Gatermanns bought a tivaivai hand stitched by Titi Numanga, which they still have and treasure.

In 1987 Ingrid Caffery led a tour group from Rarotonga which travelled through London.

“We invited them home to us, it was a surprise for Titi Numanga who saw her own tivaivai in our house.

“It was success, the group started singing, we opened our doors and the neighbours came around to listen, even the taxi driver wanted them to carry on singing,” he says.

The Gatermanns visited the group, he is still in touch with one of the members, Charlie Numanga.

On another visit to Rarotonga, they came with 1000 toothbrushes for schools in the northern group islands, he adds.

Gatermann confesses his “dream country” had always been New Zealand.

But, then he discovered the Cook Islands, and like the saying, the rest is history.

His wife worked for German carrier Lufthansa and wasn’t keen on flying non-stop from Auckland to Los Angeles for their planned vacation.

One of her colleagues, who was an Air New Zealand hostess on the inaugural flight to Rarotonga, visited their home and stormed in and said “I have been in paradise”.

And that paradise was Rarotonga.

Gattermann discloses he always says to himself he will return to the Cook Islands, as long as there are no traffic lights, no MacDonald’s, and Jake Numanga (Papa Jake) is still at the airport.

Knowing that he (Papa Jake) has retired, Gatermann says “I must say that Papatua Papatua is a very good replacement.”

“For me, and for us, it has changed of course, but you to go Foodland and you see the ladies with their head ei …  the beauty of the island and its people are still the same.”

The Gatermanns are currently visiting the Pa Enua islands of Aitutaki and Atiu.

Their favourite to do things when visiting the Cooks is to “catch up with friends, snorkel a lot, see the island and take it very, very, easy”.

On their way back home the Gatermanns will depart Rarotonga to Auckland, on to Vancouver, Frankfurt and home sweet home to Stockholm.

Following are the travel dates of Reiner Gatermann’s visits and destinations en-route to Rarotonga from Germany/Sweden.