‘Cook Islanders have served bravely and with distinction’ 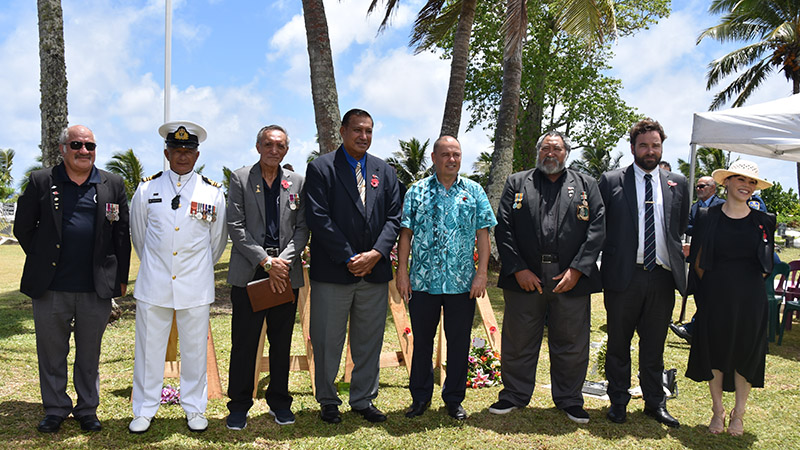 Local war veterans were remembered at the 102nd Armistice Day commemoration in Rarotonga on Wednesday November 11 - the day when an armistice was signed to end the Great War.

During his maiden visit to Mangaia a fortnight ago, Australian High Commissioner Christopher Watkins and his partner Penelope Witt paused at the cenotaph and read the names of all those who fought and fell during the wars.

The high commissioner also had the opportunity to spend some time with two war veterans he met on the southern group island.

Yesterday he shared their stories during the 102nd Armistice Day commemoration held at the Cook Islands Returned Services Association Memorial Cemetery in Nikao. Vaiora Teremoana served in the Australian Army in the 1128 Battalion of Western Australia for eight years, completing tours in East Timor defending the interests of a fledgling nation, and worked to keep the peace.

He also served twice in Iraq, and Afghanistan, before deciding to return, to what Teremoana described: “to a peaceful island floating in the Pacific. Paradise under the sun.”

Another veteran Taoi Nooroa served in the Australian Army in the Northern Territory with Norforce, an elite force of soldiers, many of whom were indigenous Australians.

Nooroa trained to survive in the outback and work across remote terrain.

Watkins said: “He is today, as tourism officer, facing an invasion of tourists into Mangaia, as the southern group special flight lands in Oneroa.”

“These two men are passionate Cook Islanders. But they are also Australian citizens, who have served Australia with distinction.” While yesterday marked the date on which an armistice was signed to end the Great War, for the Cook Islands, New Zealand and Australia, their shared history in war does not end there, he said.

“In World War Two, in Vietnam and Iraq and Afghanistan, and in peacekeeping efforts in Timor and regional assistance missions in Solomon Islands and elsewhere, Cook Islanders have served bravely and with distinction, as soldiers and as police officers, alongside New Zealand and Australian military and police, a tradition which continues to this day,” Watkins said.

“As a founding member of the Regional Assistance Mission to Solomon Islands, Cook Islanders worked alongside security forces from across the Pacific, including of course the Australian Federal Police, in delivering security and stability to the people of Solomon Islands.

“It was a hard-won peace which has held to this day. As we look to avoid future conflicts in our region, that cooperation stands as a model of how we in the Pacific family can assist our neighbours in times of need.”

Watkins acknowledged sons and daughters and families of Cook Islands who fought alongside Australian and New Zealand soldiers in Sinai, and in all the conflicts, and missions since. While paying tribute to those affected by diseases in the service of their country, Watkins acknowledged the sacrifice of Willie Ruka – a young private from Cook Islands who was buried on January 28, 1917 – two days after Australia Day, in the Rookwood Necropolis Cemetery in Sydney.

He also acknowledged Australian Cate Walker’s work restoring war graves in Rarotonga. Watkins promised that on his return to Australia, he would visit late Ruka’s grave and lay a wreath in recognition of his sacrifice.

Henry Wichman, the president of the Returned Services Association, said yesterday’s event was held in remembrance of servicemen from World War I and II, especially Pacific islanders who served in the Australian and New Zealand forces.

Wichman also welcomed the Australian high commissioner’s message saying it was felt by many in attendance.

Prime Minister Mark Brown, who attended the event, said the date was engraved in history as the day the ‘Great War’ – World War 1 – came to an end.

“The ‘war to end all wars’ as it was often called, resulted in an estimated 38-million casualties – military and civilians – around the world. Over 100-thousand New Zealanders – soldiers and nurses – served in the Great War with 16,697 of them killed, and 41,317 wounded. The New Zealand forces included soldiers from the Cook Islands, Niue, and Samoa. Worth noting that New Zealand’s population at the time was just over a million.

“Nobody ever wins out of a war, because even when you think you’ve won you haven’t, along the way lives, often many many lives will have been lost.

“Cook Islanders have served in both of the world wars. When World War One broke out some of our men wanted to do their bit and they went off to New Zealand to sign up. They did it again in World War Two and often ended up in the 28th Battalion – the Maori Battalion.” Not all Cook Islanders who went away served in the army though, Brown said.

“One of my grand uncles – my grandfather’s youngest brother Alexander Brown, left Mangaia as a teenager and headed off to New Zealand to school. When the war broke out, he checked out of school and signed up for the air force and was sent to Canada where he underwent his training before taking part in bombing missions over Germany. He was an air gunner.

“So today, while we are thinking of the end of World War 1 and paying tribute to all those who lost their lives serving in those early conflicts, I will also be thinking about my uncle Alex who I never knew. And with his tragic loss my family and I have almost certainly lost other uncles and aunties and cousins he may have provided our family with.

“So, rest in peace uncle Alex, we haven’t forgotten you and all your mates and our other relatives who served in both World Wars, whether out of a sense of duty or just for the adventure as it was to so many of you.”