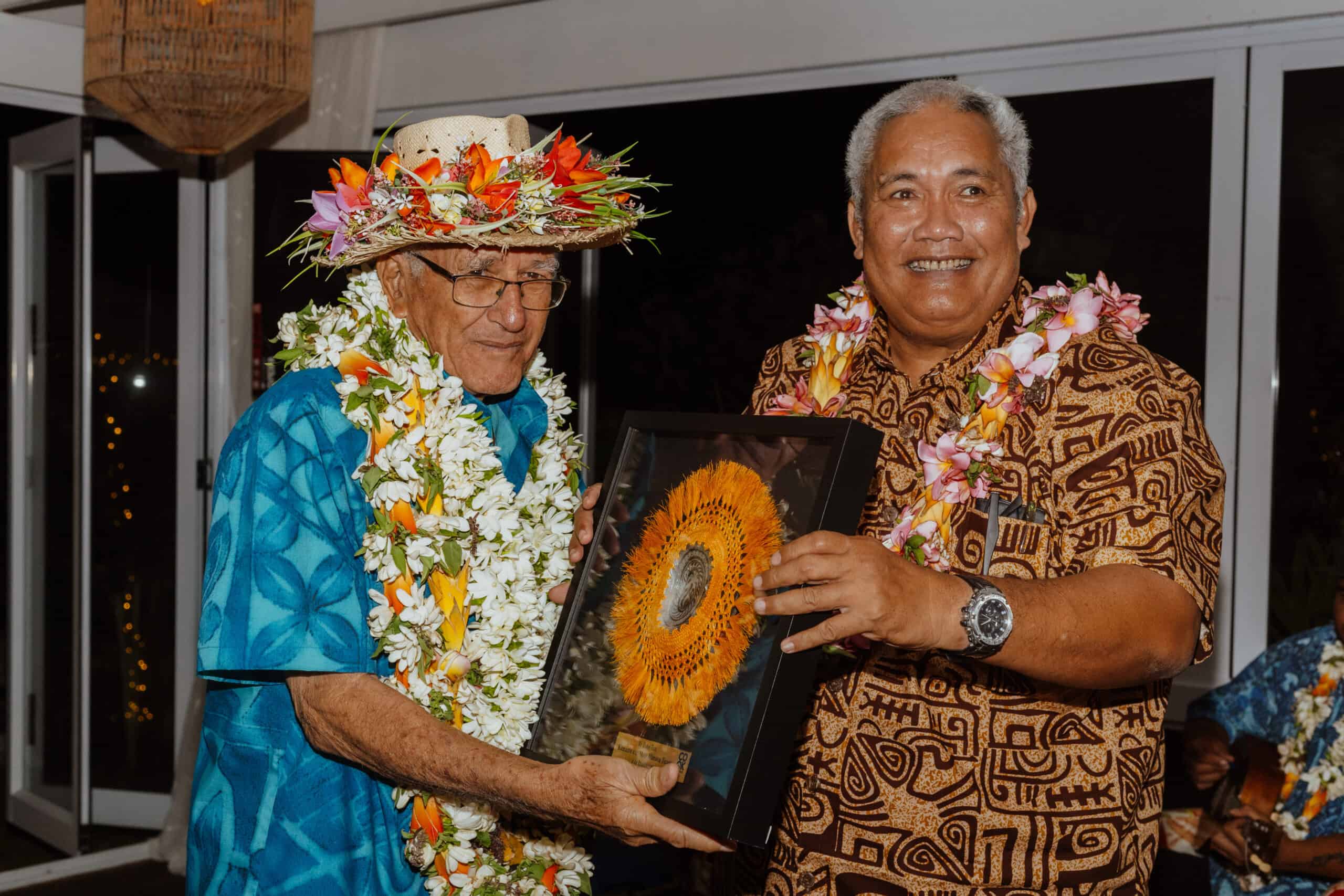 Cook Islands Tourism chief Karla Eggelton has shared heartfelt words with other Pacific leaders as a week of meetings has come to an end on Rarotonga.

Eggelton spoke candidly, taking the time to highlight “an icon here in the Cook Islands”, as she closed the Pacific Sustainable Tourism Leadership Summit in Rarotonga on Thursday.

“Finally, we come to one more important part of the evening.

“Earlier our Minister (Associate Minister for Tourism for the Cook Islands Tingika Elikana) highlighted our people being the heart of our little paradise.

“At this juncture, I would like to acknowledge one such individual, who is an icon here in the Cook Islands.

“Those of you who have visited our country before will have been greeted by the gentle strums of his ukulele and his smooth, welcoming voice.”

“I am speaking of course, of no other than our Papa Jake Numanga. Te Tane Toa Kamaatu o te Mato Manava Turoto o te Ipukarea; a man who is specialised in his skill and wise in his craft as an artist, musician and entertainer.”

Papa Jake began singing from an early age with his late father, Tiakana Numanga, his mother, the late Mama Titi Numanga and his uncle, the late Apenera Short, Eggelton said.

“He went on to win prestigious awards such as the Queen Elizabeth Award for his talent in composing songs.

“This also included winning numerous talent quests back in the early 50s.

“It was these events that sparked the monumental journey for Papa Jake in his career as a musician.

“One such prime example was when he was personally invited by the president of Nauru to follow a contingency of delegates led by the late Papa Cookie Sadaraka to sing at a significant conference held in Nauru.”

Papa Jake sang in an era where the Cook Islands, namely Rarotonga was just in its infancy stages of tourism, she said.

“Papa Jake sang at establishments such as the Maruaiai, now known as the Paradise Inn, the former Trailways, now known as Club Raro and the Rarotongan Resort at Brady’s Restaurant frequented by the elite due to its fine dining nature, with Garth Young and our former prime minister Henry Puna.

“His voice has serenaded many prominent tourism establishments and more recently the gateway into the Cook Islands, our Cook Islands International Airport.”

“It was in this year that we transitioned to the Cook Islands Airport Authority as we now know it.

“Our aspirational Minister of Aviation as the time, Robert Woonton wanted to differentiate our entry into the Cook Islands from the rest of the Pacific Islands, which gave birth to the idea of Cook Islands entertainment at the airport.

“Papa Jake was already known for his musical abilities, and at the time worked as a fireman at the airport, so it was only natural for him to take on the steward as entertainer for our Manuiri or guests arriving into our shores.”

Eggelton said she was deeply honoured to announce that Rarotonga was the first island in the Pacific who started a trend of airport entertainment, “that we see transcend beyond our shores to our neighbouring Pacific islands”.

“Papa Jake has been entertaining our visitors for over four decades, he’s served as the truest portrayal and personification of our Kia Orana spirit.

“He truly embodies Kia Orana which is summed up by his words, ‘I sing to make people happy’.

“By blessing people to live a long and fulfilling life, his life has been to serve and that in itself has been fulfilling as he’s made countless people happy.”

She then asked about 70 gathered guests to stand and join her in honouring Papa Jake.