Casting the Net far and wide

Saturday 1 May 2021 | Written by Caleb Fotheringham | Published in Features, In Depth 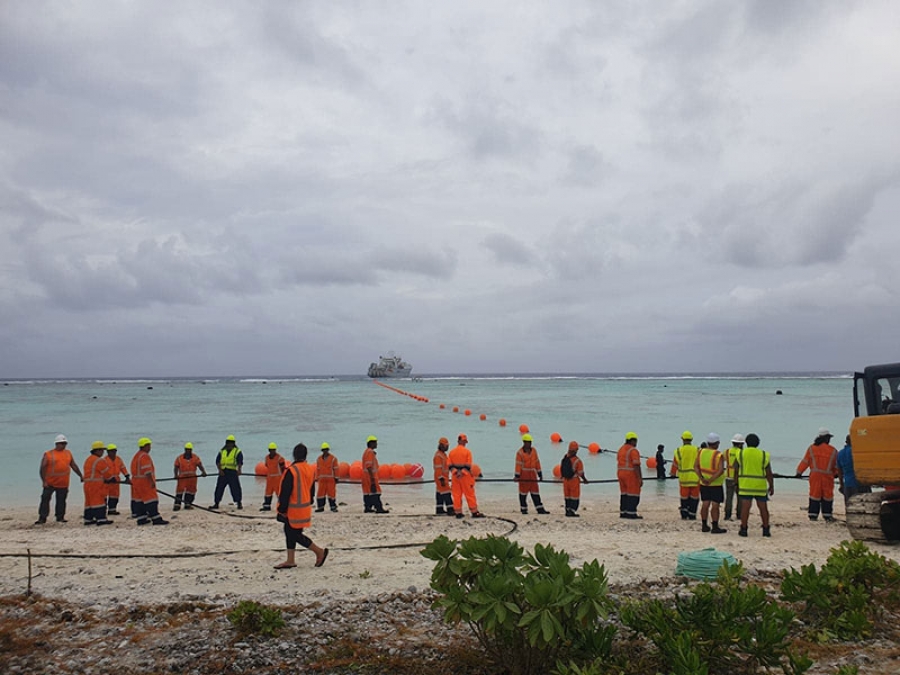 The future of the Cook Islands internet looks reliable, fast and cheap. But it can feel far off. Slow internet frustration is still very much alive and well. So where are we and where are we headed?

A world full of new competitors

Until recently, the Cook Islands was under a Vodafone internet monopoly; it changed in 2019 from the Telecommunications Act opening the internet business to anyone that wanted in.

Four new internet service providers (ISPs) have joined and with no cap on the number of ISPs, more are expected.

ISPs act as middlemen between internet suppliers and consumers. An ISP buys large quantities of data from places like the Avaroa Cable or O3B (‘Other 3 Billion’ satellite service) and distributes it to customers.

An ISP can offer packages with fixed data or limited bandwidth, often measured in megabits per second Mbps, which is the download rate of the internet connection.

To put internet speed in perspective YouTube suggests 5 Mbps to watch a video that’s HD 1080p, and 20 Mbps for a 4K video.

The chair of Competition and Regulatory Authority, Bernard Hill, says prices should get cheaper with the new competition.

Hill thinks overall Vodafone is a good company that has “probably been expensive in the past”.

Kuk i Net gets its data from Kacific Broadband Satellites and provides two products. One is a VSAT, which is at home internet via a satellite dish and has a set-up cost of $1800. The other service is Wi-Fi hotspots. Framhein says both options offer competitive prices.

A criticism of satellite internet is there are latency issues – the time it takes for data to be transferred between its original source and destination.

This can make video conferences and gaming difficult.

“The latency issue is only a problem if you want it to be a problem for you,” says Framhein. Around the world, low orbit satellites are being deployed in an attempt to create low latency, fast internet in places that traditionally have a poor internet connection.

One of the best-known companies doing this is Elon Musk’s Starlink.

The company is in beta testing and expects the people taking the trial to have internet speeds of 50 to 150 mbps and low latency.

The testing costs users close to $700 to set up and $140 for the service. According to StarLink’s website, it’s expecting to hit Cook Islands shores in 2022.

Framhein says when it comes to the possibility of new low orbit competitors, he’s “not too concerned”.

“They’ll just be another satellite provider.”

Scarbrough says the cable has allowed Rarotonga and Aitutaki to have access to powerful tools available elsewhere in the world.

“The internet and what the internet can do for you evolves very rapidly and we see that all over the world.

“What are the wonderful things that the internet can deliver in the future, who can say, but we know through the cable we will be able to participate and I think that’s really key… it’s a ticket to participate.”

Scarbrough says it could be down to a number of factors from Wi-Fi routers, the computer performance, plans with capped download speeds, and copper wires.

The copper-based internet connection system in the Cook Islands has limited capacity for speed.

Telecommunications regulator Hill says moving from the cable capable of 10 million Mbps to copper wire is like a very large water pipe flowing quickly with water moving into a very small one.

Copper wires were originally placed for the purpose of telephones. This is not unique to the Cook Islands and common around the world.

Internet speed with copper is determined by the distance of the internet exchange; the longer the copper wire is the slower the internet is.

But improvements can be made to copper. Here it has meant an ADSL (Asymmetric Digital Subscriber Line) system is in place which has a theoretical internet speed of 24 Mbps.

Scarbrough says further improvements can be made but it gets to a point where fibre makes the most sense.

He says it’s like someone buying a Mini and wants a really fast car. So the person needs to buy a bigger engine, a better carburettor, a new exhaust, “and then you go, actually I might as well just buy a faster car – it’s a bit like that”.

“We’re pretty much getting to the point where cooper can’t cope with the speeds anymore so optical fibre is a great solution.

“It’s very easy to make it happen, the only thing you need is money. It is quite an expensive activity.”

Vodafone Cook Islands is undertaking the project and its chief executive officer Phillip Henderson says “Fibre to the Premises” will connect fibre to all premises on Rarotonga and Aitutaki.

“This will enable customers on these islands to have the same service capability as ultra-fast broadband in New Zealand.”

The direction the cables data flows can cause latency issues and at the moment it’s flowing the wrong way.

Data from the cable is transmitted eastward to an internet junction point in Los Angeles.

The Manatua Cable is a shared venture with French Polynesia, Niue, Samoa and the Cook Islands; it was done as a way to share the expensive burden of the cable.

Scarbrough says the most relevant internet junction points are in Los Angeles and Sydney and to get to those points work needs to be done with other cable operators.

“What we hope to do is open up a route instead of eastward, take us westward to Sydney.”

Scarbrough thinks a route will be opening west and is optimistic for the future of internet in the Cook Islands.