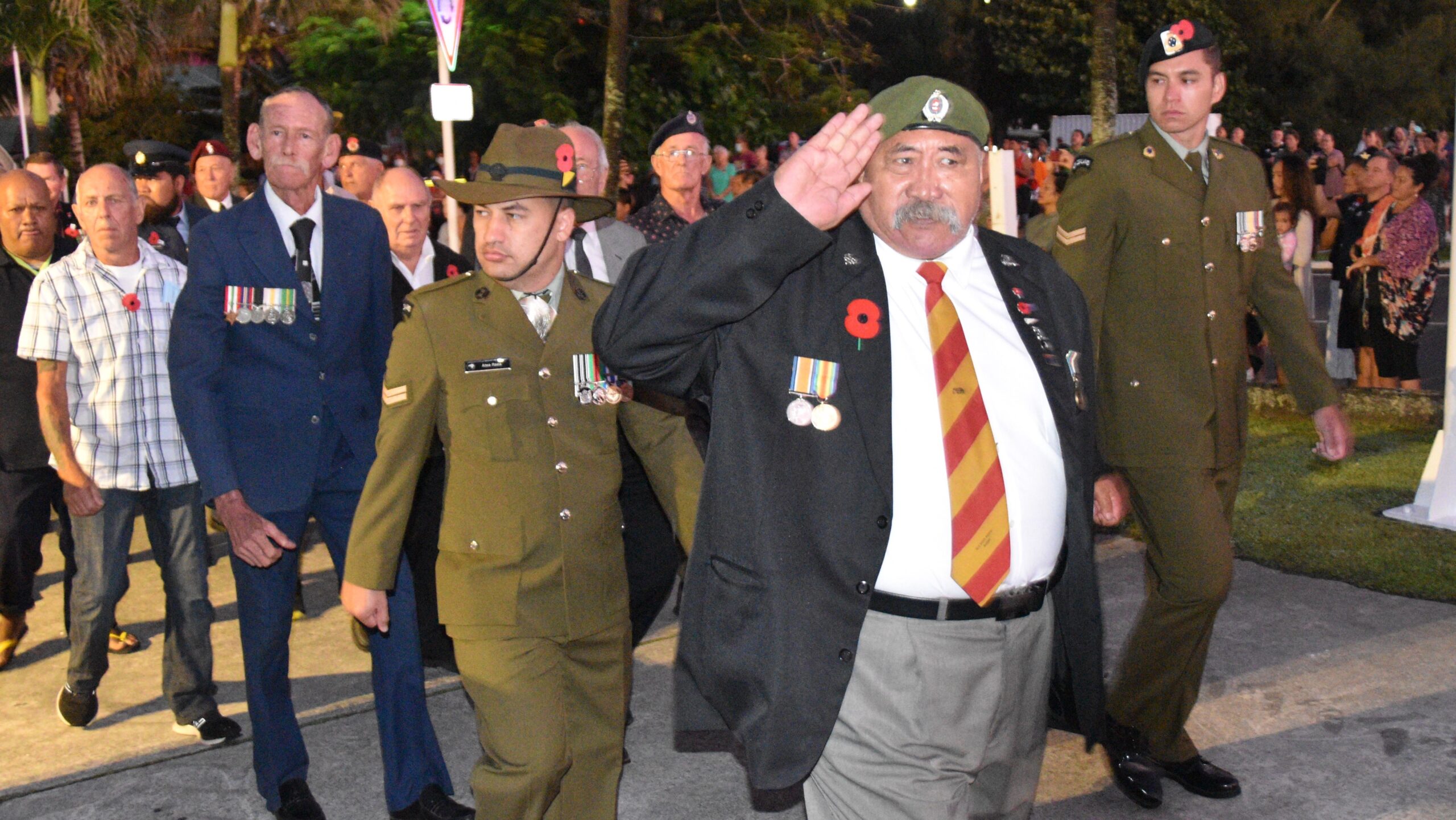 Before dawn broke on ANZAC Day, a crowd of more than 100 people respectfully and solemnly gathered at the Cenotaph for the Dawn Parade.

Numbers were down, due to the Covid-19 restrictions, and other agencies and organisations were invited to lay their tributes at the Cenotaph after the completion of the ceremony.

Guest Speaker Pira Wichman, reflected on the past seven years, noting in 2015, the then Cook Islands High Commissioner to New Zealand Rosie Blake in Auckland invited him to a meeting to set up on ANZAC Day for Cook Islanders as “some people did not realize that Cook Islanders took part in WWI.”

Recently, the Royal New Zealand RSA announced that this year all the poppy money received through donations will towards supporting young veterans.

“ANZAC Day is a day of remembrance… some of the soldiers who went to war were quite young and some never came home, hence we are here today to honour them,” said Wichman.

“Many don’t realize that we do have young veterans those who served overseas and some did not come home.

“ In 2012, New Zealand had young people killed in action… we would like to highlight that we have young veterans who are in there 20’s and they deserve help,” Wichman said.

In New Zealand, 50 per cent of the people the RSA assist as veterans are 30,000 veterans are under the age 50, he added.

Wichman urged those who are serving or have served, “to seek assistance from the organisations that we have or come through the RSA, because we are there for you… as one day the demons arrive and you will need the systems.”

He has also been involved in the selection of, and training of support advisors, formally known as the RSA Welfare Officers in the Auckland region.

Wichman acknowledged the work Paula Paniani, Cate Walker, Bobby Nicholas and Julie Taripo for the restoration and new headstones of former service people in the Cook Islands, and the Cook Islands women ‘knitters’ for their contribution to troops in WWII.

In closing remarks, he noted former members of the Cook Islands Police Force who had served in the Solomon Islands - Rebecca Hosking-Ellis and Johnny Hosking, who also marched in the Dawn Parade.

The Cook Islands RSA President, Tom Annas says, ANZAC is about the remembrance of the Boer War, First and Second World War, Malaya, Borneo, Korea, Vietnam all the conflicts the ANZACs have been involved in, “a remembrance of those who have lost their lives.”

The emcee for the occasion was Sam Samuels, the prayers were led by Padre Paul Kauri, John Hinton played the Last Post and Andrew Orange piped the ‘Passchendaele’ bagpipe tune.

New Zealand Army servicemen, Cook Islanders Atea Raea and Tom Harrison Jnr also marched in the Dawn Service and later joined the RSA members and guests for the ‘gun fire’ breakfast at the premises opposite the airport.