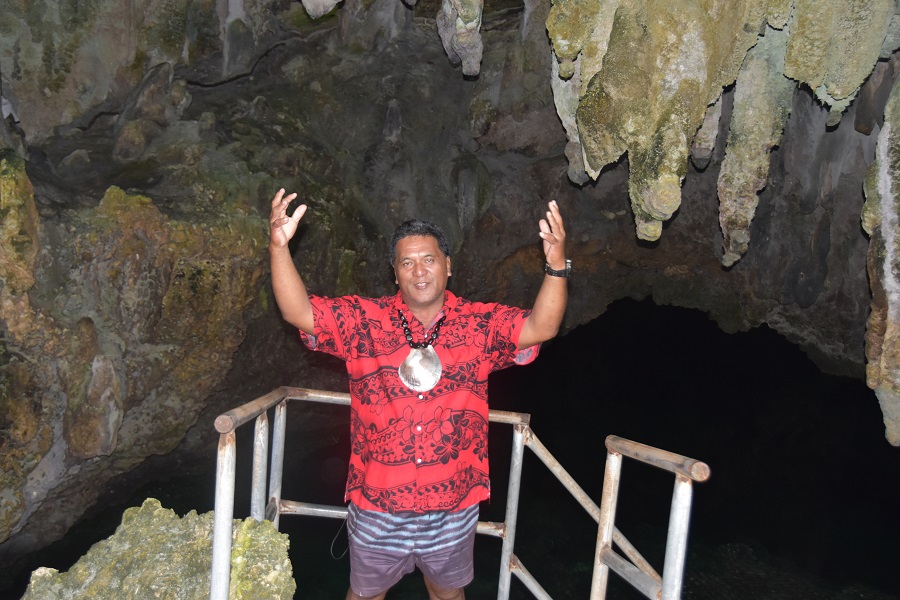 Mitiaro tour guide Julian Aupuni Junior treasures the island’s legendary history that has been passed down from generation to generation.

Julian Aupuni Junior has been a tour guide on the island of Mitiaro for a long time.

The 50-year old, who is also the Ui Ariki’s spokesperson says he has been on the island since the time he was born.

He loves to take visitors around the island while sharing the history.

“I take people around the island to visit the caves and lakes,” he says.

“I started doing this back in 1984 straight after Tereora College; I started as a tour guide.”

Junior is one of the many people you must meet on your arrival to the island.

Regarded as a skilful tour guide by those who have met him, Junior knows the twist and turns of the legends and history of Mitiaro.

He will take you around the island explaining every meaning behind a historical site of tribal wars, chiefly heritage and the stories behind the caves and lakes.

When visitors arrive, they look forward to visiting the water caves and the lakes of Mitiaro.

Inland on the eastern side of the island, it looks swampy but with the current road upgrade, you will reach your destination within minutes from the coastal main road only to find the island’s richness within the famous two lakes.

Covering nearly three quarters of Mitiaro, Junior says the lakes Te Rotonui and Te Rotoiti are surrounded within a swampy area, it is muddy and deep at the centre, but within the lakes is one of the island’s main delicacies - fresh water eels.

Better known as the itiki, Junior says: “That’s our pork. When the sea is rough, everybody knows they have come to the lake, for the itiki.”

He says there are five different types of eels in that lake, some are yellow and white, black or have very big ears or are just bigger in size.

The lakes contain only two types of fish - the tilapia was introduced in the 1970s and the milkfish were first brought to the island from Manihiki in the 1980s.

The second lot was brought two years ago in December. The island men recently harvested 92 milkfish and distributed to the people.

Around the island are more than 30 water caves and most of them are yet to be fully explored.

The two most common and visited caves are Vai Marere and Vai Nauri.

Those who have been to these caves know that the people highly respect and observe the customs placed on them.

Junior says: “We don’t want the water to be destroyed or disturbed by those from outside. You must be respectful when coming here for a swim.”

Vai Nauri is one of the more famous water caves in Mitiaro and Junior says it’s where you can see the sky and watch the shadows cast through the cave entrance giving it a sparkling blue colour.

Junior explains that in the past, people used the Vai Nauri water cave to get drinking water.

“In the olden days, people use to come and get water here to drink and return fishing, in those days we had to walk through the makatea, from the picnic area, then climb from the top, and come down, some can’t climb down so they walk all the way around and then come down the cave.”

It was in 1989 that the Mitiaro youths completed a project - a new access road to the water cave.

He says there are three main entrances into the water cave.

There is an entrance going underneath the cave water about 400-500 metres to the west of the island, some natural minerals were discovered under the water by some divers from New Zealand couple of years back. There is another tunnel going to the ocean.

Before jumping into the water, as a visitor you must understand that a chant will be sung.

Once you get to the jumping spot, while the singing goes on, the names are called out, giving the greenlight to take that plunge.

The leader of the group is always asked to take the first jump.

A pe’e or a traditional chant or a call is made to ensure no one is hurt when jumping into the water, Junior explains.

“It is similar to a song. When you come in a group and even individually or as a couple, you have to say a prayer first. We have to ask for the blessings from our Father because we don’t want to see our children, people hurt when they are jumping otherwise.

“I always ask the leader of the group first and he or she will be the first to jump into the water. I will tell him/her to follow someone into the cave and wait for the chant, it is a special song like a pe’e.”

On Sundays, no one is allowed to swim in their swimming wear, says Junior. You must jump into the water with your church clothes and even with your eis on.

“Be respectful to Vai Nauri,” he says.

“Vai Nauri is very popular to locals as well as visitors. When people always come to Mitiaro for a holiday they always want to see Vai Nauri, when they come here, they don’t want to go back to their accommodation. They want to be here, reason being is because of the uniqueness of the cave and the water.”

Vai Marere is located close to the village of Mangarei and Junior says the people of Mitiaro hold a lot respect for this water cave.

The cave water is regarded as healing water – the only one of the island’s cave that has been known to cure skin and eye diseases and body aches.

Junior says for young children, parents get water from Vai Marere, boil it and bath their children.

For the older generation and youths, they can always go to the cave.

However, it is customary and very important to know that if a man is in the water cave, women must not enter – likewise with the men. Couples can always go together.

The cave now has light bulbs surrounding the area for those who wish to spend hours in the healing water.

Junior is an experienced tour guide and shared more than just the history of the caves and lakes to a team from Cook Islands Tourism and Cook Islands News that visited the island a month ago.

He has two children currently in New Zealand and has passed on the stories to them.

But on the island, he has been training youth president Rangi Kimiora, who is also a young businessman.

Junior hopes to continue his journey as a tour guide and pass the legends of his island on to the next generation.