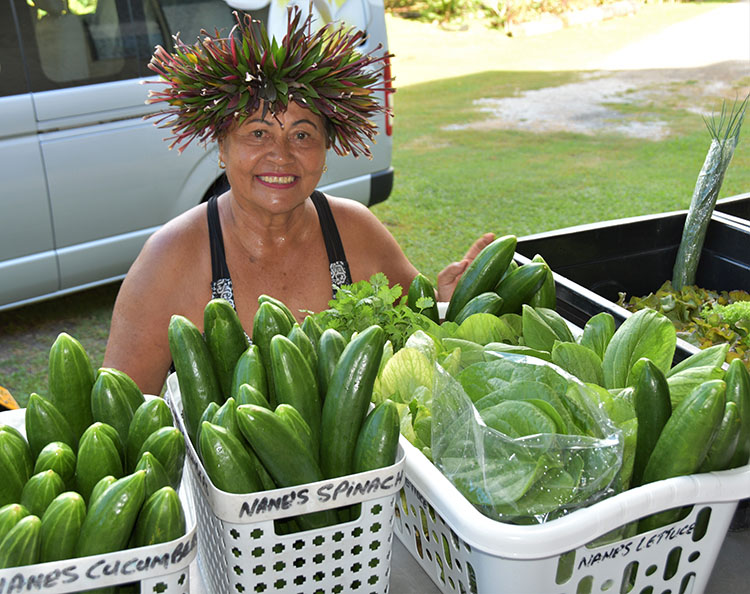 The Aitutaki Hydroponics vegetables are packed and ready for Nane Herman Purea to deliver. 21042302.

More than a year on from the start of Covid, Nane Herman Purea from Aitutaki remains smiling. That old saying ‘laughter is the best medicine’ resonates when you’re in her company and one can’t help but be drawn in to her infectious laughter. Journalist Melina Etches met her during her recent trip to Aitutaki.

Nane Herman Purea is the face of Aitutaki Hydroponics which produces a variety of vegetables daily. Her motto is “Eat fresh produce to keep your beautiful, handsome, bodies healthy”.

The hydroponics venture began four years ago; it took two years to set up, prepare the land, build and assemble the hydroponic system.

First was the removal of an old DC3 that was parked in their back yard for over 33 years, a left-over prop from the filming of the movie The Silent One.

“When we started it was a lot of work,” she says. “My son James brought the gullies, also known as hydro-liners, and water tanks over from Raro, and built the benches.”

“We knew that our underground water is a problem here – it’s salty, so he made sure that we had plenty of storage for rain water.”

Two years ago, the business reaped its first harvest – at the time their trading name was ‘Nane’s Lettuce’.

Business was good then, the island was flowing with tourists, hotels, cafes and shops were busy, and she was becoming well known for her hydroponic produce and receiving more orders.

Life was good. Then Covid struck and the struggle started.

“It was tough when the borders closed. We had so much produce and no customers,” explains Nane.

So she delivered the lettuces to the hospital, the disability centre, the three task force constituencies and to individual homes; only then did she see where some families actually lived.

Nane made do with the situation and continued to share out the produce, “I was happy – we couldn’t sell any so we gave it out to our people of Araura, and with a smile too”. Nane Herman Purea on the way to deliver “door to door” vegetables for Aitutaki Hydroponics. 21042306.

Because there was no longer a market, James shut down some of the benches.

People on the island were also planting their own home gardens so they didn’t need to buy, “so we were really experiencing the loss of income”.

The business had to reinvent itself; when the Aitutaki/Rarotonga borders reopened, James sourced markets on Rarotonga.

In July last year, they managed to get Prime Foods onboard, “Thank you Dan and Perita”, and later in August, CITC (for Rarotonga).

Later, Nane started promoting on Aitutaki her personal “door to door deliveries with a smile” that has proved popular.

“I really do enjoy doing the deliveries; sometimes I give a little extra if I have too many or I drop off to the disability team or the hospital.”

She believes in giving to those in need when you have more than enough: “Giving and receiving is a blessing.”

Although there are no visitors on the island, she still loves to create an ei katu with fresh flowers to wear.

“Well, there are no tourists, only the hydroponic vegetables, so I talk to the lettuces and make myself pretty in front of them and they ‘smile’ at me,” she tells me, laughing.

And her vegetables do look impressively healthy.

Today, she supplies the hotels and cafes that are open and locals also pop into her home at whatever time, when they need vegetables.

According to a regular customer: “It’s more convenient to just drive here to pick up vegetables rather than driving from one shop to the next or the next.”

Earlier this month, she was upset that her wage subsidy application from July 2020 to November 2020 was declined, as the strain of financial commitments due to the loss of income was becoming particularly worrying.

“Not receiving any financial help since last year did not discourage us, we chose not to shut down all the hydroponic benches and we still managed to continue on, striving to provide fresh healthy produce for our people.”

However, last week Nane was ecstatic to learn her sole trader grant had been approved.

“Praise our very Good Lord, I have now received a grant. I’d like to thank Tara Tschan Toi (Aitutaki) and Nga Takaiti (Rarotonga) for their assistance with my applications, and to Government.”

Now and then she picks up business from people visiting from Rarotonga.

Her latest tour guide job was for the New Zealand High Commissioner to the Cook Islands, Tui Dewes on her first official visit to Aitutaki.  “It was a thoroughly enjoyable time,” Nane says.

Not many people know that Nane had always wanted to be a tour guide, “since I was little”.

In 1976 when Papa John Herman passed away in Aitutaki, Nane’s husband Teokotai ‘Tango’ Herman decided they would move back to Aitutaki from Rarotonga to look after his Mama Nancy Herman.

Fortunately, the Public Service Commissioner at the time, Richard Chapman, approved her transfer to work in Aitutaki for the tax department, Customs and Trade Labour and Transport (TLT), so they moved.

She learnt the history of the island from Papa Tepaki Mokotupu, Papa Solomona Tetevano, Papa MP Kake Ioane and Papa Tupuariki Puna – the Pa Metua, “they taught me the history of Aitutaki.”

During those years in the 70s, she recalls Aitutaki was exporting bananas and other produce to New Zealand on the MV Fetu Moana and the Tiare Moana.

Papa Solomona Tetevano was in charge of agriculture and the export of bananas to New Zealand was number one priority.

“Every home on the island had a banana plantation and the well-being of everyone was good – when it came to payday, everyone was smiling.”

One of her memorable working experiences was while representing the Cook Islands at the 4th regional training course on Drug Identification and Concealment Methods, held in Noumea, New Caledonia in 1982.

“We learnt how to use drug test kits, and I actually tried marijuana and cannabis for the first time. I couldn’t believe it, I’m from the islands, but it was part of the training and also used as medicine. I learnt many new things.”

In 1997 after 26 years of working for government, Nane resigned to manage a joint partnership with Air Rarotonga Lagoon Cruises – Paradise Islands. Despite the challenges caused by the Covid-19 pandemic, Nane keeps a positive outlook and keeps active with the hydroponics business.

Is she ready for when the border reopens to Kiwi tourists? I ask.

“We are ready, we are ready to supply the hotels when the time comes. It’s been good with the staycations and people from Rarotonga coming over for a visit, people coming over to say hello.”

She is the mother of  James Purea Ngatupuna Herman and Chloe Nancy Herman.

For a remedy of laughter and fresh produce, Aitutaki Hydroponics will give you both in one dose.