For one Mitiaro couple, Home is where the heart is 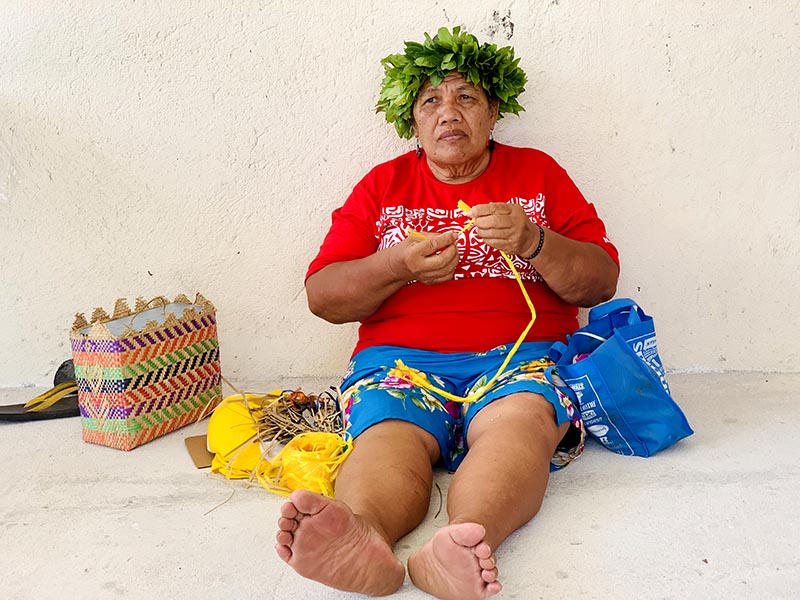 Cindyanna Abraham has encouraged the mamas on Mitiaro to start a weekly market where they can sell their beautiful hand made products. (Photo: Katrina Tanirau) 20111722

Since she was a little girl Mitiaro/Nukuroa has always been where Cindyanna Abraham’s heart is. And when you’re a guest at her and her husband Junior’s Divine Retreat, her hope is that you feel like you’re at home too.

Like most young Cook Islanders, Cindyanna Abraham was a youthful 16-year-old when she decided to head off and explore the world.

Back then she says her parents gave her their blessing and encouraged her to go and “make something of yourself”.

“They said come home when you’ve made something of yourself and I thought what does that look like?” she says.

After travelling and gaining experience “here and there” in a number of different jobs, Abraham settled in Auckland and began a long career in the dentistry industry.

But her heart was always in Mitiaro, the island where her mum is from.

Because he loved fishing, Abraham tried to convince him that moving back might be a good move for them.

But after three tries, Terry was honest and said he would probably get bored so they headed back to New Zealand.

Sadly, heart breaking news arrived when Terry became ill and was given nine months to live. Instead of drowning in sadness, they decided to live out his bucket list.

One day they had a conversation and he asked where she wanted to live.

“It was then I had this realisation, and said to him ‘if you aren’t going to be here then there’s no point in me being in Auckland so I’m going back to Mitiaro’,” she says.

After her husband passed away, Abraham carried on working in Auckland but her desire to move “home” was strong.

“I rang my mum and I said guess what I’ve decided I’m going to go and live in Mitiaro. I’m going to build you a house, come on let’s go you and me,” she says.

Recalling the conversation, Abraham laughs. As a well-travelled woman, her mum was surprised that she had come to the decision she had.

Abraham told her mum that she had already bought something for the house she was yet to build.

“I’d bought two rocking chairs one for her and one for me, we will sit on the porch even if there’s no house and will sit there and rock around,” Abraham says.

“She said ‘but baby you’re too young for a rocking chair’ and we laughed.”

And so the dream began to become a reality.

Over the years, Abraham journeyed back and forth to Mitiaro to do “little bits and pieces”.

Abraham’s sister Beryl was living in Mitiaro at the time raising her children and landscaping the section where Abraham was building her house.

“This was my sister’s big art piece. She rang me in Auckland to make sure we were working on the same dream. It’s a living timepiece the way I see it.”

Two years after her beloved Terry passed away, Abraham moved back to Mitiaro for good.

It was while she was in Rarotonga that she met her second husband and love of her life Junior Abraham.

“That’s a whole other story,” she says with a chuckle. “I guess like they say the rest is history.”

Junior was ready and willing to make the move to Mitiaro and went from being a distinguished police officer in New Zealand to a Jack of all Trades – building, plumbing, you name it there was nothing he didn’t do during their build.

“He’s gone from been a policeman for 30 years to being Bob the Builder and he’s had some great teachers and done so well.”

Abraham is a go-getter who is keen to see the tourism industry thrive in Mitiaro.

She has encouraged mamas to set up a weekly market and frequents Mitiaro School where she shares words of encouragement with the students.

The main messages she wants to give them is anything is possible with passion and love in your heart.

The first group of domestic travellers to the Southern Pa Enua were hosted by the Abrahams at Divine Retreat, the name she gave her beautiful home when the group arrived.

She has plans to establish a restaurant and work with the people of Mitiaro to help make visitor experience “amazing”.

“I hope that when you come here you feel like this is your home,” she says.

“Home is always where the heart is.”