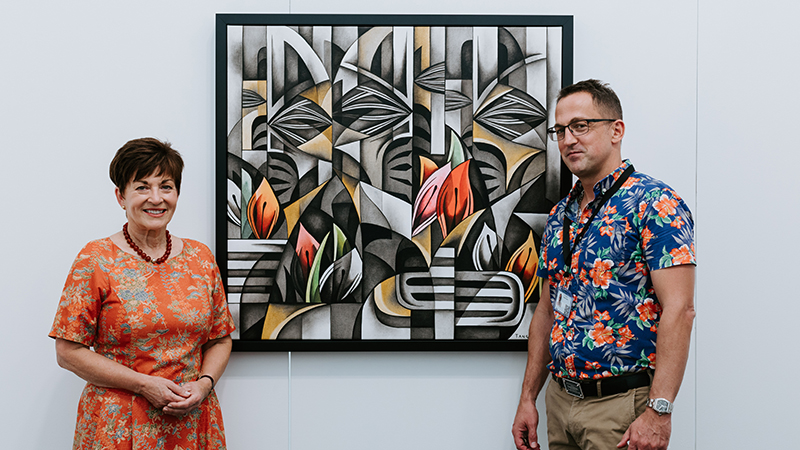 Cook Islands’ Bergman Gallery was again the only Pacific based gallery that took part in the Auckland Art Fair at the centre of the community Covid-19 outbreak. By Rachel Smith.

Exactly a week before the opening of the Auckland Art Fair on February 24, all eyes were on the latest Covid news in New Zealand. There was talk that the art fair was on, that the art fair was probably off. And then that evening the official decision was made – the live event was on, subject to Covid Alert Level 1 being announced the day prior to opening.

“Given the proximity to the event, we are very aware of how much work the artists have put in for this Fair, and the commitment of participating galleries, especially after the cancellation of the 2020 event. We would be devastated not to have taken the opportunity on behalf of the visual arts and events sectors,” announced Stephanie Post and Hayley White, Auckland Art Fair co-directors.

“They took a big risk,” says Ben Bergman, Director of Bergman Gallery, who arrived in Auckland from Rarotonga and headed straight into three days of lockdown.

It was a risk that paid off, the 2021 Auckland Art Fair opening as planned at The Cloud on Auckland’s waterfront. For Bergman, the art fair has been two years in the making; works that were intended for last years’ fair held over for 2021, and artists Mahiriki Tangaroa, Sylvia Marsters and Raymond Sagapolutele creating new pieces during 2020. Of the 40 galleries at the art fair Bergman Gallery was again the only Pacific based gallery.

Tuesday (February 23) morning and it all comes together as the Bergman Gallery booth is set up. This year the booth is double the size of previous, Bergman snapping up extra space early on. The art works arrive from the framers throughout the morning, each piece carefully unwrapped and laid out as the puzzle of what goes where, comes together.

Marsters’ gardenia works fill one part of the booth, four large canvases and a more recent series of smaller paintings. She arrives just as the hanging is completed. It is the first time in over a year that she has seen some of them, an emotional experience to be with them again.

“They have been wrapped up for a long time. I finished them right before lockdown last year,” Marsters says of the larger works. “All the years I’ve painted gardenias and they keep changing all the time. I’m often surprised by the colours that I see. Recently, decayed flowers come to the fore; elements of light come into play and exploring the reality of life, death and renewal.”

“For me, the flowers transport me back to the islands, the Cook Islands, where my father’s from, and painting the white flowers has brought out all these different colours and emotions. And that’s what I’m trying to project when you see my work – a space to contemplate, to be present, and a respite from all the stuff that’s going on around us.”

Come the VIP opening on Wednesday morning, all the galleries are in a state of readiness as guests are welcomed into The Cloud with a mihi. This year Ben Chan works alongside Bergman at the gallery booth, seconded from Auckland Art Gallery Toi o Tāmaki where he works as Gallery Assistant and Duty Operations Manager. Chan has the experience of participating in art fairs on a large scale, having twice worked at the New Zealand pavillion at Venice Biennale.

He met with Auckland based artists Marsters and Sagapolutele prior to the art fair, for conversations about their work and practice which he in turn shares with those visiting the Bergman Gallery booth.

“For me, if people don’t understand the work then they won’t appreciate it,” he says.

Day one starts well with sales of work from all three artists. There is audible and visual relief that the gallery’s own risk to go ahead is paying off.

Governor-General Dame Patsy Reddy visits the booth and returns later in the morning to purchase one of Tangaroa’s works. By the end of the second day all of Tangaroa’s paintings have been sold, news which is quickly relayed back to Tangaroa, a Cook Islands based artist who is not in attendance at the art fair this year. Like Marsters, her work was created either side of the global pandemic.

“Covid had a significant impact on my work. For a period of a month I self-isolated, so it was self-isolation on what is pretty much an isolated island,” says Tangaroa.

“The idea that I had planned for an upcoming solo show (In a Perfect World shown at Bergman Gallery in 2020) became redundant and for a week I wandered around the house thinking, OK - now what? It was by chance that I came upon a small self-portrait painting that I did back in 2007; that triggered the change in my work.”

Her new work, a triptych created over the Christmas/New Year period, was in turn inspired by this 2020 solo show. “The idea behind the series was to reflect and summarise on what was an ill-fated year - one that passed where we barely distinguished one ‘season’ to the other,” explains Tangaroa.

Over the next few days, thousands of people pass through the art fair. There are organised tours from across the country, school groups, and families, all viewing and discussing the art works. Sagapolutele and Marsters are at the booth every day, to talk about their work and their process.

Friday afternoon and Sagapolutele is wearing his mother’s lavalava as he gives his artist talk, the same lavalava as in his work Change. His triptych of photographic images represents his mother, himself, and his father, and investigates aspects of knowledge, love, sacrifice, climate change and colourism, and all include his ancestor skull motif.

“My work navigates this idea around cultural identity – it connects me to my heritage as a Samoan,” he explains. “The bones are about honouring my heritage. In Samoa, bones do not represent mortality; a skeleton is a connection and not to be feared, it is part of who we are.”

He talks openly about the challenges of photography which is not a traditional Samoan art form. “I’m an orator and photography is the form I use. It’s about what is inside you, not what form you are using. The camera is not the practice, the person is.”

It is these conversations, the opportunity to hear Raymond put words to his photographic narrative, that bring extra layers of understanding and connection. There is an exchange of responses – the artist a witness to the viewers reaction to their work, and the viewer learning more about the intention and process behind each piece.

For Bergman, the art fair has been a success in many ways, not in the least of being able to physically make it there.

“It was a big question for us as to how to raise the money to attend the fair, given Cook Islands borders were closed to tourists in March 2020, but, between our generous long-term supporters, Palm Grove, Bank South Pacific (BSP), Turama Photography and CITC Liquor, a great fundraiser and some good clients, we were able to meet our targets,” he says.

As it goes in these times, the last day of the art fair does not happen as Auckland moves back lockdown. There is gratitude that this window opened, that artists and galleries and the art appreciative could be together, that the art fair could happen at all.