Keeping his comics on the down-low 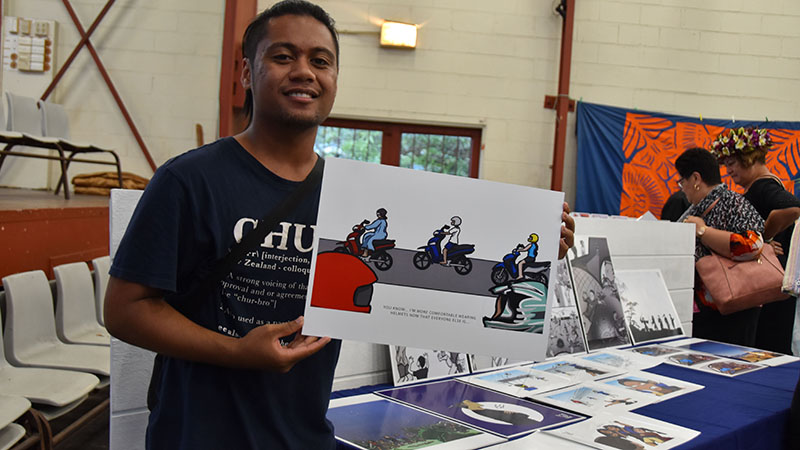 Young Cook Islands comic artist Montel Williams hopes to one day show his art to the world but only when he’s ready.

When he was six-years-old, Montel Williams started doodling random things.

Back then, he says he did not see or think that cartoon comics or illustrations would do much for him.

Now at the age of 22, Williams, who is of Cook Islands and Samoan heritage, took on the challenge again this year to showcase his comic work at an art exhibition themed ‘Island Blues’ that was held at the St Joseph’s Hall this week. “In my mind I always wonder what they think I do in the office. Even funny they think I'm a Filipino which I joke about with my colleagues a lot who are Filipinos,” he laughs.

Williams is the eldest of three brothers and two sisters and he says he has always kept his comics on the down-low.

It was some time in 2018 while he was in New Zealand visiting friends and family, that he bought his first drawing tablet.

“So back then, my family didn’t know what my art was going to look like, apart from the paintings I did in school,” he says.

“I sort of had a feeling my parents weren’t sure about this decision but I shrugged it off.”

His family has different styles of creativity when it comes to art.

“I remembered back when we lived in New Zealand, my mum would do cake decorating. My dad who is well known George ‘G-Dub’ Williams, the general manager of 88FM Radio Station found his creativity with music. My brothers would play creating/building mobile games like Minecraft.” “So, when I invited them (my family) to last year’s exhibit my dad said that he didn’t know I could do this kind of stuff. Since then I got their full support which I’m happy about,” says Williams.

Now he sees many great and talented illustrators online, drawing comic versions based on their life stories.

The former art student of Nukutere and Tereora College says when he was in high school, he would paint, but after graduation he never saw it as something he would do in his spare time or as a career.

“So apart from working as a graphic artist these past few years, I haven’t done any sorts of art until mid-last year.

“I was fond of popular comic series like; Asterix and the Vikings, The Adventures of Tintin, The Simpsons comics, Alex Rider and others. I mainly read the humorous ones.”

At the moment, Williams does not have any projects but draws comic-style ads every week for a Titikaveka Youth group and gets a lot of positive feedback from the youth and leaders.

Once in a while, or most recently he sketched a comic to put a smile on the faces of his close friends.

One day he hopes to share his work with the world but only when he’s ready.

He is still learning and appreciates every critique and advise.

“I embrace them all.”