Working to make our country safer 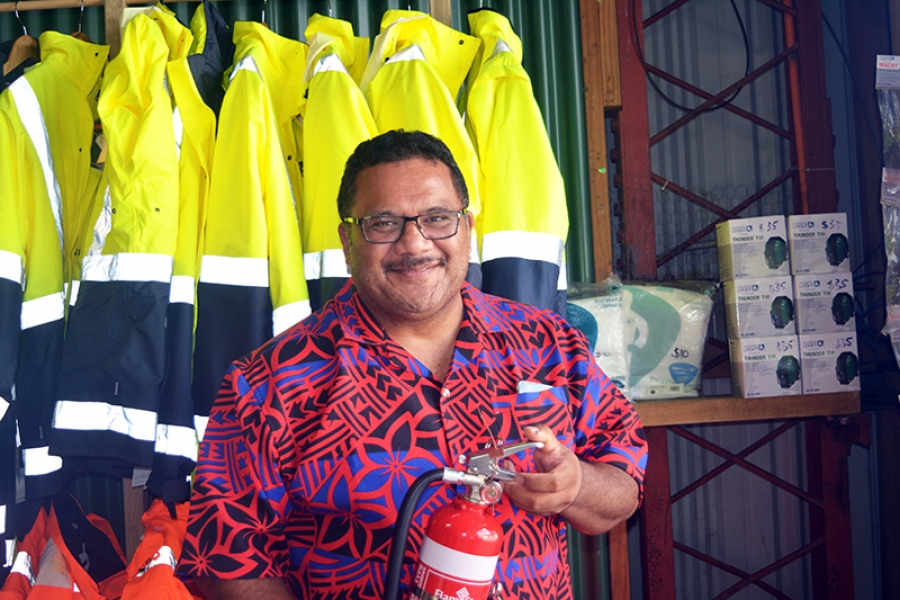 Fire extinguishers are one of the many popular items people have purchased from Safeworx Cook Islands.

Rutaki-born church pastor Paul Kauri has become one of the leading providers of safety wear and equipment in the Cook Islands through his Safeworx company.

Safeworx, which had its official launch yesterday and is the culmination of an idea that first occurred to Paul and his wife Tania a few years ago.

Having been a full-time pastor in New Zealand for over 20 years, Kauri made the decision to develop a two-year transition plan that would end with him handing over the leadership of the church to a new couple.

Paul and Tania decided to remove themselves from the church completely, to give the new leaders space to grow, and at the same time, he realised he would need a new vocation.

“It was quite a shift going from full-time ministry, leading a church, to trying to understand safety products,” Kauri says with a laugh, at his Safeworx building behind Oasis in Nikao.

Having been involved with church work for his entire adult life, Kauri reached out to a friend who owned Safeworx in New Zealand, asking for a job.

“He said that I was going to be a sales rep, and that I could start straight away. After I hung up the phone and I said, “Lord, help, how do I do that?” Kauri said.

“When I started, I had four days of training and learning and understanding the products, which is not a lot of time. But I found it the best way to learn is on the job.”

Kauri says that after praying to God about it, he decided that in his first month, he would take the company’s list of customers and visit all of them, just to say hello.

The report Safeworx got from the first month was that the consumer base had doubled, even though Kauri had thought he had very little idea of what he was doing.

“I was just going to say ‘hello’, to put Safeworx back out there, and the customer base doubled in the first month. Before I left, the whole territory doubled.”

Although his friend didn’t want him to leave the business Kauri decided in 2015 to return to Rarotonga, where he had not lived since he had moved to New Zealand as a child.

He arrived armed with more knowledge about the industry he had only recently joined, but was aware that the environment was completely different.

“There’s still the landscape and psyche to understand. I knew a little more about products, but not the landscape, so I would just go around and talk with people, and find out how people think,” he said.

However, he did feel there was a need on the island, as people were purchasing their safety products from New Zealand, in a process Kauri described as “buying blind.”

While the official launch was only yesterday, the company’s original goal was to open last year. This became out of the question when Paul found out he had cancer.

The life-threatening disease kept him in New Zealand for nine months, but the effervescent and good-natured Kauri said that it was an important part of their story.

“I’m not wanting people’s sympathy, but I can’t help but feel it is part of our story. It just makes up a part of our journey to get here.”

Since their return, they have had a strong reaction from the community, with customers now able to physically see the equipment they are buying, as well as explain to Kauri and his crew exactly what they want.

Fire extinguishers, in particular, are in big demand and a number of people have approached Safeworx to run training sessions, the first of which took place yesterday.

Having only been in the business for around five years, Kauri simply sees himself as imparting his knowledge to best benefit the community.

“It’s one of the things that we do like, that we’re helping to meet a need, or service a need. Previously, people were buying overseas and sometimes getting products they weren’t happy with.

“Here, we have an expertise behind us for everything. Boots, glasses, jackets, whatever it may be, we come with an understanding of products.”