Popular business relocates to the west 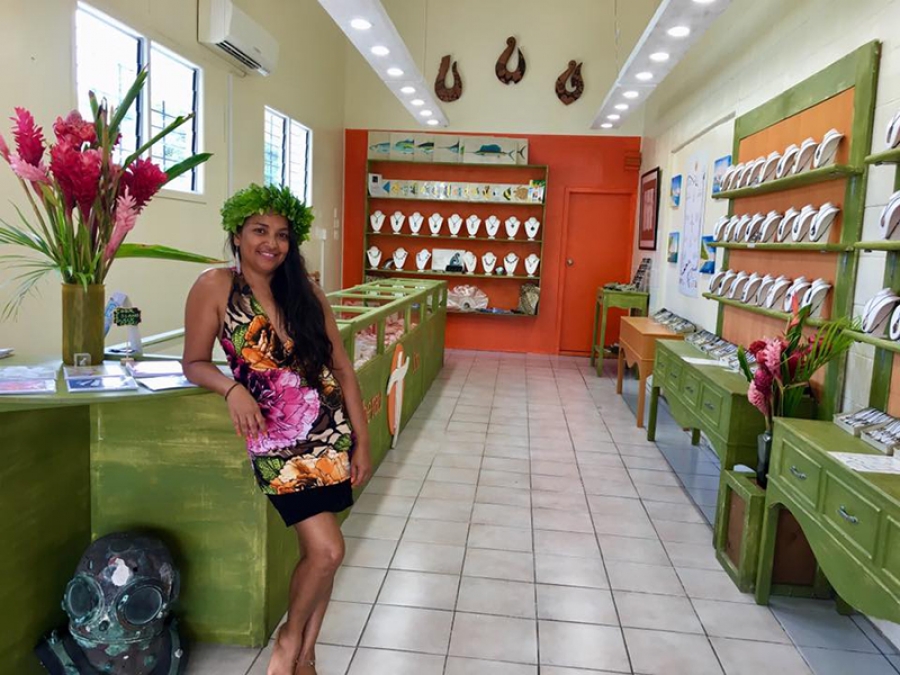 Nicolina Jim is happy to be relocated from their house in Matavera to their own retail shop in Arorangi. 18012506

What once was just a long empty room in Arorangi, has been transformed into the renowned jewellery and craft shop ‘Tokerau Jim’.

The store, which specialises in carved pearl pendants, has relocated from a home-run business in Matavera to its own retail shop located in Arorangi.

The business, owned and operated by Tokerau Jim and his wife Nicolina Jim, began in April, 1999, when Tokerau did his carving outside the Snowbird Laundry.

From there, the couple who had started their family, moved the business to their home in Ngatangiia.

Soon after, Tokerau and Nicolina decided to build and move into a new house in Matavera, which became both their home and their business for the last 13 years.

“When we moved house, our business moved with us,” Nicolina said.

The couple say they had been planning to move the shop for a while, but finding the right retail space was almost impossible.

“We didn’t rush, we just waited. When this space in Arorangi came up, we thought (our business) was really complementary with the stores next door,” Nicolina said.

“After pondering on it for some time, we finally approached the owner. It was time for us to move.”

The move took around three weeks and the store opened in its new location opposite Crown Beach Resort, on Wednesday this week.

The couple had been longing the opportunity to locate their business around resorts and other shops, and the new premises are ideal.

The outlet in Arorangi has the potential to increase business, as tourism is a lot quieter in Matavera, and there is barely any foot traffic.

“It has been a miracle people have stopped there for the last 13 years,” Nicolina says.

“People usually stopped by on purpose, but now with our new location, we get all sorts of people walking by, who want to stop in and have a casual look.”

The years of operating from home weren’t too bad for Nicolina as it gave her the opportunity to look after their children and manage the shop at the same time.

“With my children all growing up, there wasn’t the need to have the business operating from home anymore,” she said.

It was an emotional moment for Nicolina as she stripped the walls and packed boxes of stock from their Matavera shop.

“My children have all grown up in those rooms, and now it’s just a huge empty space. It was actually a tearful moment because we have a lot of memories attached to the space in Matavera.”

Adjusting to change isn’t always easy, but the couple’s aim is to maintain the family atmosphere of their old location.

“One thing about the place in Matavera, was customers felt that it wasn’t just a jewellery store.

“They would come in and smell the baking, see children running through the house and they knew it was somebody’s home,” she said.

Nicolina says she wants to maintain a warm and friendly feel at the shop without the feel of a purely commercial business.

“Ninety-nine per cent of our friends have come through the door, this is how we met them,” she added.

Pearl carver Tokerau will still work from his home in Matavera and on Saturdays, he will continue working outside their store at the Punanga Nui Market for live exhibition.

Tokerau Jim is open for business from 10am-3pm until March, and will open for longer hours afterwards from 9am-4pm.