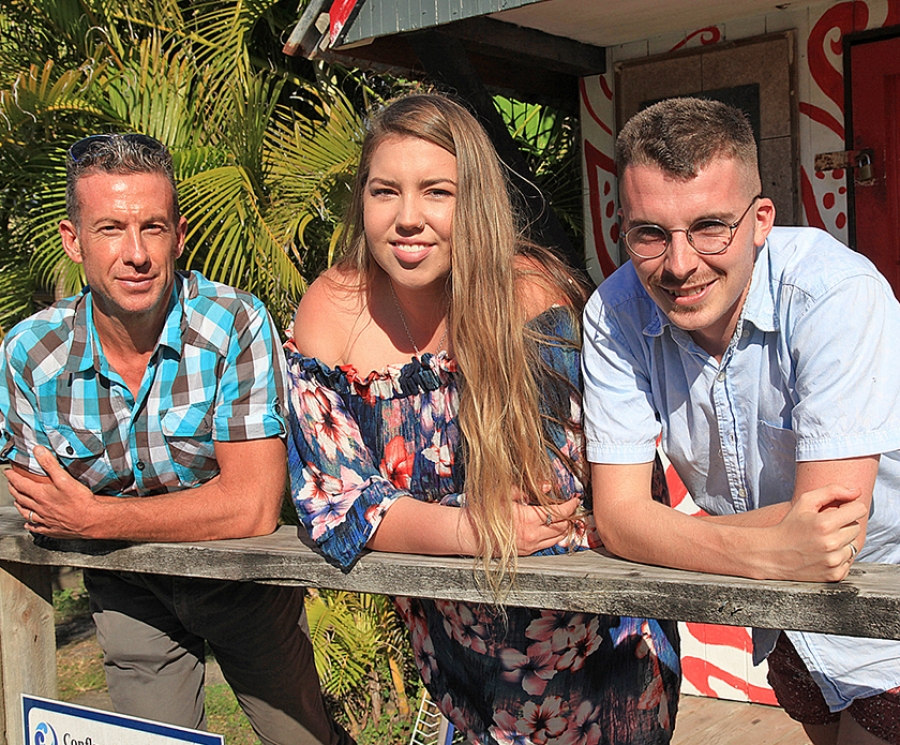 CI News has made three recent editorial appointments who have been out and about for several weeks now reporting the news of the Cook Islands.

The most recent arrival is Chris Taylor, 43, who has left a life on Australia’s Sunshine Coast to advance his career in journalism.

With his wife, Janelle, a Cook Islander born in New Zealand, a role at CINews in Rarotonga was a chance for he and his young family to renew a Cook Islands connection while pursuing his ambition to learn more about newspapers.

Chris made a direct approach to CINews publisher John Woods to see if they were seeking any new journalists.

“Fortunately, the timing was right and I jumped at the chance to come on board,” he said.

“I had been working on my own, writing projects online and in print, as well as previously producing communications in government. My last role was with the Australian Red Cross.”

Chris studied up on Cook Islands politics and current affairs before he arrived, and was thrown into the frontline on the first day at work covering the presentation of the budget in parliament.

His first couple of weeks were busy as he reported from parliament each day as well as undertaking a number of general reporting assignments.

Chris has made a major commitment to come and work in the islands, leaving behind a home he and his wife own in Caloundra and enrolling their three children, aged three, seven and nine, in Rutaki school.

He said he is enjoying the Rarotangan life as well as the challenge of learning more of the skills involved in producing a daily newspaper.

“It’s quite similar here to Queensland in terms of lifestyle and weather – but less people and there are less cars, so that is a bonus. I appreciate the laid back lifestyle here, the rich culture and heritage – and it’s all about family.”

Reporter Shae Osborne, 21, arrived at CI News from Auckland in February and has quickly immersed herself in the Rarotonga way of life.

“I arrived here pretty much fresh out of university where I obtained a Bachelor of Communications degree, but I previously worked for Mai Fm and The Edge radio stations in Auckland, New Zealand.

“Becoming a journalist has given me the opportunity and platform to share the stories that are often unheard and overlooked.

“I have found a real interest in court and police reporting, maybe because I have family members in the police force back in New Zealand.

“My job with CINews is my first full time job as a new graduate, so everything has really been a learning experience for me.

Arriving also from Auckland in early June, reporter Conor Leathley, 24, has also made CINews his first job in journalism.

Having graduated from AUT with a Bachelor of Communications in the same year as Shae, Conor has thrown himself into reporting the daily news with a special leaning towards sports – where he is working alongside CINews veteran sports reporter Rashneel Kumar.

He also has an interest in environmental issues and the Cook Islands culture.

Conor has a social conscience: “I’ve never liked it when I see the rich prospering at the expense of the poor, and I think that one of the roles of a journalist is to keep those in power accountable, so joining the media seemed like the right thing to do.

“I’ve always wanted to work overseas, and I couldn’t think of a more unique opportunity than working in Rarotonga, so I jumped at the chance and I was just lucky enough to get the job.

“I graduated from AUT last December, and then spent most of the year as a casual radio producer at Newstalk ZB and Radio Sport in Auckland.

“In Auckland the focus was on the big news, what was happening nationally or abroad. I like being a part of the community, getting to know the mamas and papas and being able to tell their stories.

“I was expecting hot weather, which I was not ready for, and still haven’t gotten used to, as well as the beautiful countryside. I was also aware of the deeply religious people and institutions on the island.

“Back in Auckland, because there are so many people, you could at times feel pretty irrelevant. I guess I feel like the people here value me, that they genuinely want to help me if I need it, because I’ve been offered rides almost every time I’ve been walking home at night.

“From the first day I arrived, and I noticed all the mountains on the island, I decided that I wanted to climb every single one before I left. I’d also like to learn Cook Islands Maori.”