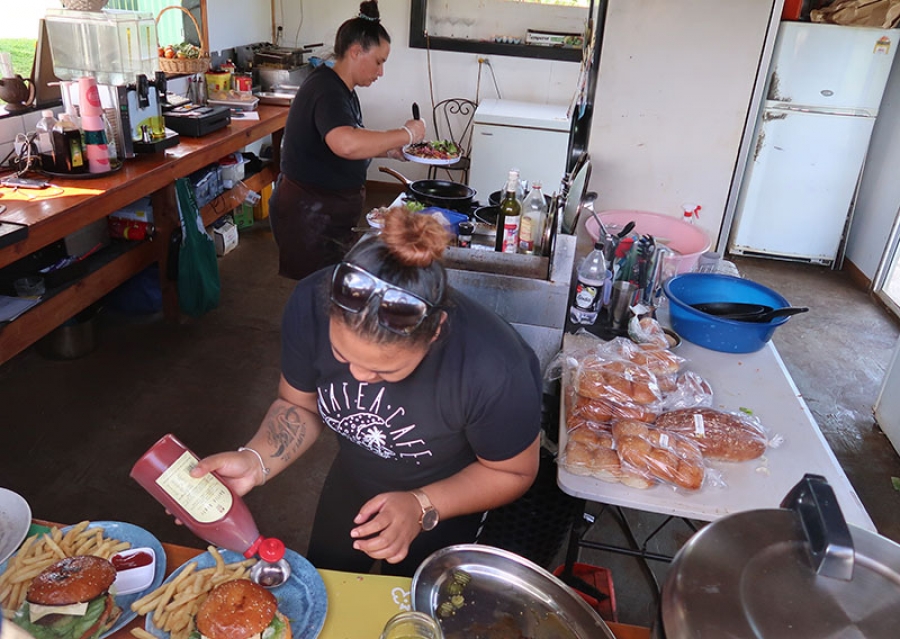 Pauline Henry puts the finishing touches on the Island Macs. 20072437

GOING LOCAL: It’s Burger Friday when we turn up at Avatea Café, on Aitutaki. That means one thing: the community’s new favourite, the Island Mac.

Once a week, Karin Crombie and her staff put burgers on the menu – Macs or Whoppers. As I whisper to my son, there’s nowhere else in the world where you can get a Mac or a Whopper in the same restaurant!

“Honestly,” Karin tells me, “I think the sauce is as close as I can get it to a Big Mac sauce, made fresh every Friday morning – and I think it’s pretty damn good.”

That’s an understatement: everything about the burger is a hundred times better than a McDonald’s burger. All the produce is local: the cucumber and the lettuce and the cucumber, and the beetroot from the lady down the road. The fish is locally caught, of course.

James and Karin Crombie returned from Australia to Aitutaki in March last year. James build the café under the big, old mango tree planted by his great-grandfather. And wife Karin runs it.

They opened on March 14 – then, a week later, Covid happened. The borders closed. Their timing could not have been worse – because they’d just started, they aren’t even entitled to the wage subsidy.

“I thought about pulling the pin,” says Karin, 31. “But I thought, unless I’m losing lots of money, I need to give it a go. So I cut costs right down, got in there and went for it.

Almost everyone in the village of Tautu and the length of Aitutaki relies on tourism. With no income, they can’t pay $15 for a burger and chips, except on occasions. So Karin puts on specials – the other day was goat curry, a local favourite. And dishes on the menu are named after locals, like Janet’s keto bowl.

And in these tough times, the community is swinging its support behind the café. Especially on Burger Fridays!