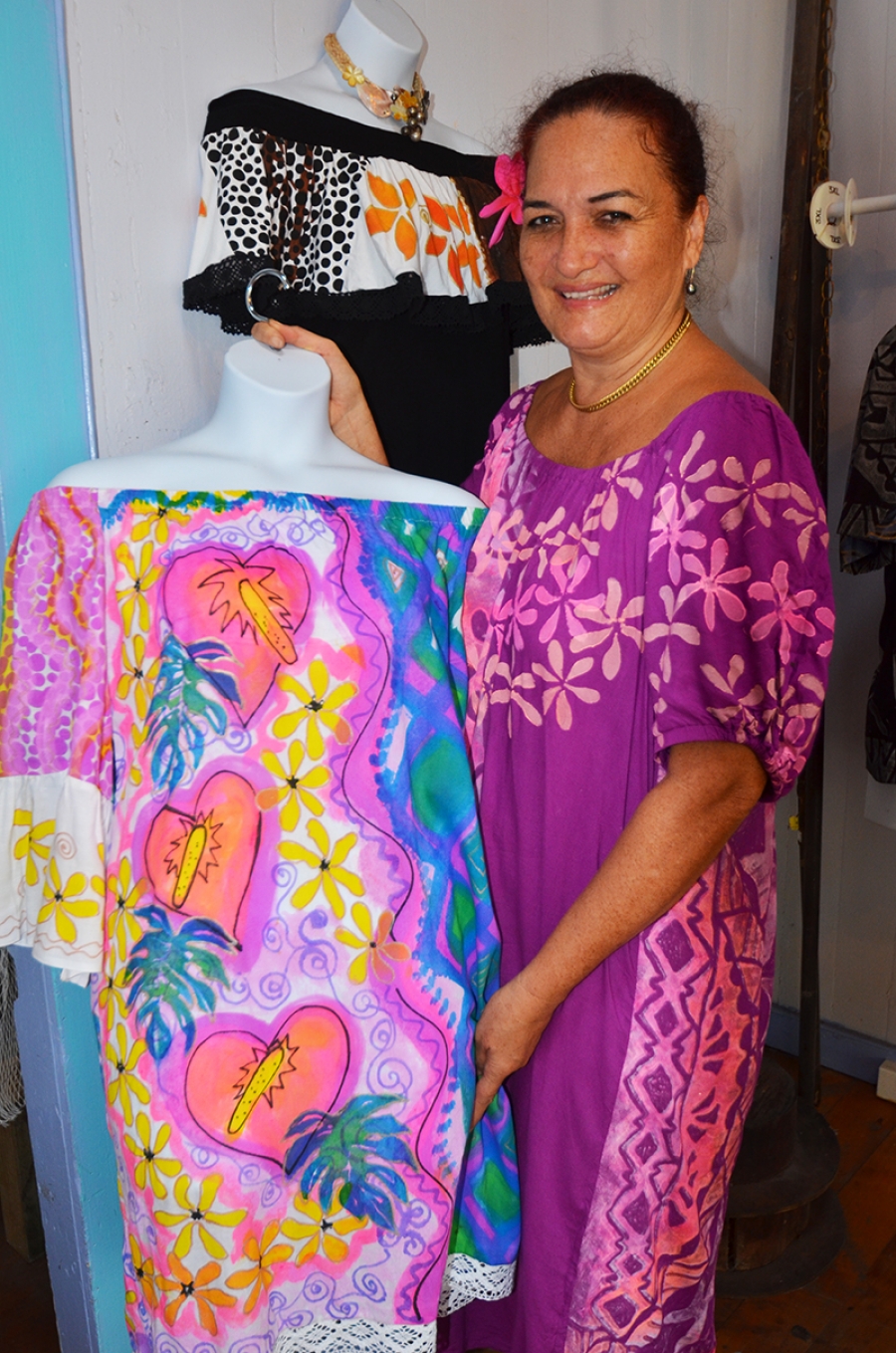 Gina Keenan with one of her more intricately-designed dresses. The process of hand-painting each piece can be time-consuming as it is painted in layers and drying time is required between each layer. 18062223

She’s been hand-painting sarongs and other clothing for decades, but it’s only recently that Titikaveka justice of the peace Gina Keenan has finally decided to make a real business out of what she has described up until now as “a little bit of a hobby on the side”.

Her pieces of “wearable art” come in a variety of vivid colours, incorporating various Pacific motifs, floral and marine designs.

“I’ve been hand-painting since the markets first opened in the 1990s or something,” says Keenan.

“My mother was one of the original hut owners there and I used to do hand-painted sarongs.

“That’s when I just dabbled – it was just picking up a brush and a piece of fabric and going from there. I was never taught – I think I’ve always been good with colour co-ordination,” she adds.

“Then I got asked to start hand-painting swimwear – the lycra stuff for Tavs, so I originally worked with Ellena (Tavioni), who was actually a good mentor to me.

“So she was the one that kind of got me into this. And hand-painting lycra is bloody difficult.”

Working from the “colourful chaos” of her home in Tikioki, Keenan has also set up shop on Tutakimoa Road in Avarua, located in a bright blue and red colonial-era villa that seems perfectly suited to her taste.

“I like things that look a bit rustic,” she says, showing off some of her designs in a room hung with two mini-chandeliers and decorated with ornate porcelain teapots and an antique-looking old-fashioned flatiron.

While Keenan has always worked in clothing design on and off, motherhood and her job as a justice of the peace have long been her main priorities.

But, thanks to a little help from her Chamber of Commerce mentor Didi and her own personal social media guru – aka daughter O’hiva – she says she’s finally getting serious about clothing design as a business and running her own label.

“My business mentor has always been telling me to get started, get started – and he’ll be happy to know that I am started now,” laughs Keenan.

Her daughter will no doubt be happy too – and it was thanks to her that CINews first came across Gina Keenan Designs.

“Yes, she put that stuff up on Facebook the other night,” says Keenan of the Facebook page her daughter has started for her business. “Me being a bit of a dinosaur when it comes to that stuff.

“‘This is what you say Mum’, she said – so OK, I think I’ll hand that over to her as part of her job. She’s head girl at Tereora College and she’s wanting to study a BCom in business and that sort of stuff so I said, ‘Well, there’s your project, you can do the marketing for me’.”

Summing up her design style, Keenan says she “wanted to come up with something that is uniquely me”.

“Bright flowers, whatever. And a lot of it’s freehand. I used to do wall hangings and sarongs that people – even after 20 years now, they say, ‘Ohmigod, it’s still got it, still looking good’.

“Handwash it, dry it out in the sun – you’ve got a piece of art for life.”