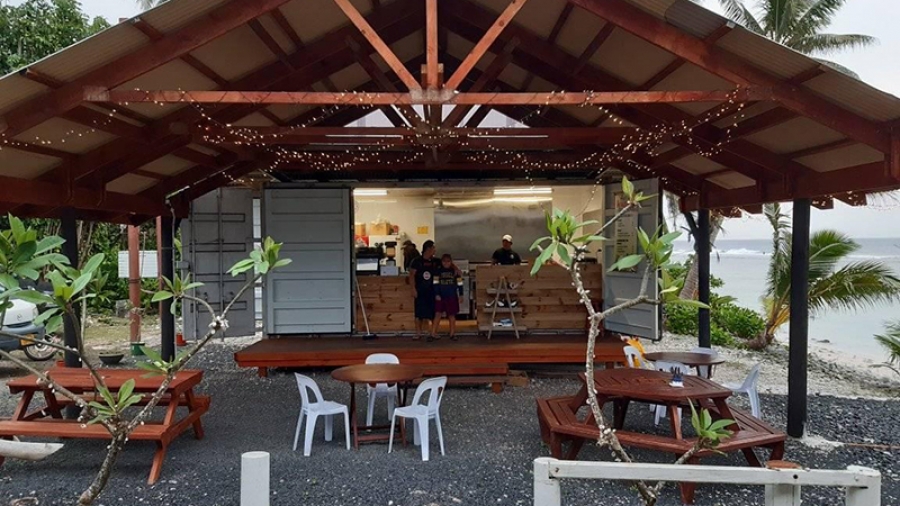 When Ray Taylor Roumanu learned to cook, he was the only boy in the class.

Ray Taylor Roumanu had a dream. Not a big dream, but an important one to him: that one day he would own a little café.

On Valentine’s Day this year, that dream was realised when Ray’s Hut opened for business at the Game Fishing Club in Tupapa.

Barely one month later, he had to shut it down again.

“Business was very good before I had to close, I had the busiest week. Then came Monday – the whole place was empty, no one around, people vanished.”

Now, Roumanu has reopened his restaurant, just between 5pm and 8pm each day.

Although the closure of the business had been a strain financially, he remains thankful.

“Money-wise, yes, it has been a struggle – but for our family we are good, we are lucky here.

“I’d be more worried if the virus got here. I’m happy my family and everyone here are safe.

“We can’t do anything about money, everyone else is going through the same thing.”

From the start, Roumanu designed his menu to cater for local clientele, not tourists, “I want to keep it affordable for us, so our people can have a meal that they too could order in a restaurant, to give them that dining experience.”

His meals are divine, from crispy fish and chips, tender striploin steak, garlic prawns, catch of the day meals and a breath-taking view of the beach.

He is thankful for the loyalty from customers, “I’m thankful that locals continue to support me and come and eat, if I get 10 customers on a day, it’s a bonus, especially for a little business like ours.”

Not making any money, he has managed to keep a positive outlook and just stay afloat – paying staff, purchasing stock, and to keep open.

Why does he love cooking?

“It’s like creating something, and I’m good with my hands so I enjoy it.”

He first dabbled in cooking at Tereora College. His memory of being the only male student in the hospitality class at Tereora college makes him laugh.

He learnt to how to bake, cook and make beds, “I was the only boy in the class surrounded by 18 girls, it was so much fun cooking and talking with the girls; then the next year, eight boys joined the hospitality optional class – I think they got jealous.”

Leaving school at the age of 17, his first job was in construction. Soon after, top local chef Tony Bullivant employed him at Trader Jack’s.

“I really wanted to work in the kitchen, but I started as the groundsman.”

That was until the day it got so busy and he was called into the kitchen and started peeling potatoes.

Quick with his hands, he would ask Metz the cook to give him a go at cooking in between his duties. The experience reignited his passion for creating food.

The restaurant appreciated his work ethic and enrolled him at the Hospitality Training centre in Ngatangiia for the baking and pastry courses that ran from 8am to 4pm.

He would head straight to Trader’s afterwards, to work at the restaurant until late at night.

“It was long day back then, but then I was very fit, it didn’t bother me.”

Born and raised on the island of Pukapuka, he loved fishing.

He would take his fishing rod to school hide it in a nearby bush and sit quietly in class, waiting for the lessons to be over.

“I didn’t learn anything, I just dreamed of fishing, like which spot I would go to…”

“The teacher would be talking and I would be thinking about fishing, as soon as the bell would ring, I was out, pick my rod and run; prefects tried to chase me but they were too slow, and couldn’t catch me on the reef.”

But he is proud of how he has learnt to read the clouds, weather patterns, the tides and all the different styles of fishing, skills he values today.

At the age of 11 he arrived to Rarotonga on New Year’s Day 1992 for the first time; he was in awe of the life style and everything on the island.

When he arrived, he couldn’t read and had no idea what a “date of birth’ was.

When his first teacher asked him, he replied, ‘What is that?’” He laughs.

Roumanu sees the bright side of every situation and his sense of humour is catching.

He has enjoyed many years of experiences in the food industry having worked at Trader Jack’s, Blue Pacific, Café Salsa, several restaurants on the island, and vendor at the Punanga Nui and Muri markets.

“Now here I am, living my dream, thank you to the fishing club and their members and the Business Trade Investment Board.

“It has been good journey for me… interesting.”