Black, white and something in between 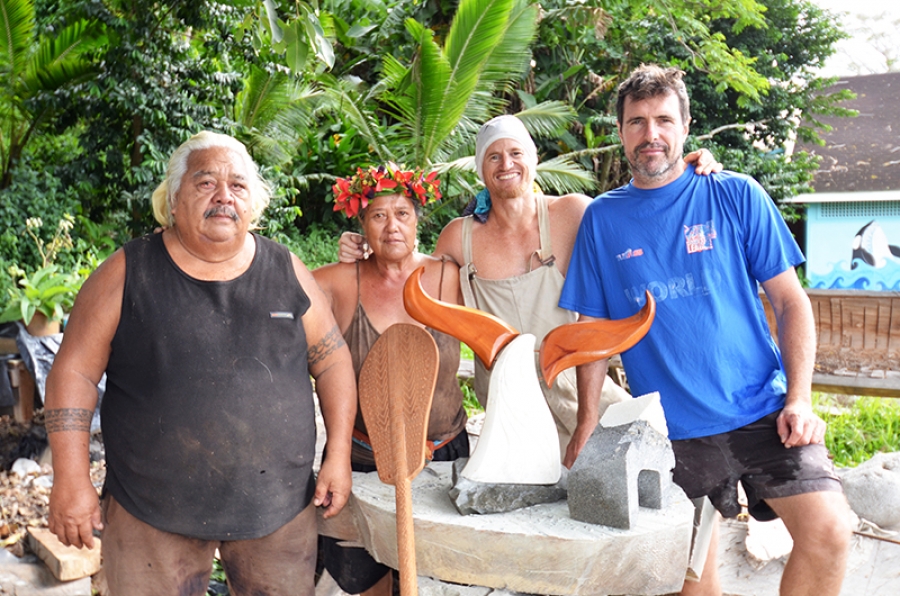 Mike Tavioni, his wife Awhitia, Hori Miller and Chauncey Flay with a few of their works. 18051032

One’s black. One’s white. One’s a bit of a mixture.

“When we had our last show it was just me and Mike, and he came up with this hilarious idea to call it “Black &amp; White”,” explains Flay, whose exhibition works are largely made of white coral, while Tavioni’s are carved from black basalt.

“No, it was because he was carving just white stone – he was being racial,” interjects Tavioni.

“I was watching him carve one white stone after another and I was like, what about black stone? Then I got interested in black stone just to retaliate.”

The pair were planning on sticking with the black-and-white theme again this time around too, but when Miller came onboard with his mixed-media pieces, using local mahogany as well as coral and basalt, things weren’t so – well, not so black and white.

Whatever the exhibition ends up being called, each set of works produced by these three sculptors definitely has its own unique flavour.

Working with concrete and compressed powdered glass made from recycled beer bottles as well as coral, Flay cuts and combines geometric shapes to create a more abstract style of art.

“My art’s about the way that coral is used in the Cook Islands as a construction material,” he says.

Tavioni’s work on the other hand is centred around the use of more traditional Cook Islands designs and motifs, while Miller’s pieces lie somewhere in between the two contrasting styles of his cohorts.

While the exhibition has really only been organised over the past two or three weeks, Miller says the hardest thing for him is putting a price on his artworks.

“People that do art are not really very good with selling themselves, you know?” he says.

That might generally be true – although not when it comes to master carver Mike Tavioni. “Mention last year was a sellout, so people better hurry,” he says. “Everything for sale. No sentimental pieces.”

Flay says it would be good to make “some money”, but adds that for him “it’s just awesome to be able to come to Raro and work on something I’m passionate about – and put on a show”.

The as yet unnamed exhibition will consist of about 40 carved and sculpted pieces from the three artists, plus a few additional paintings by Miller.

It opens from 5pm on Monday at Mike Tavioni’s gallery by the Whale Centre, and will continue throughout the week until Friday.