Traveling back in time ‘The people there are so laid back’ 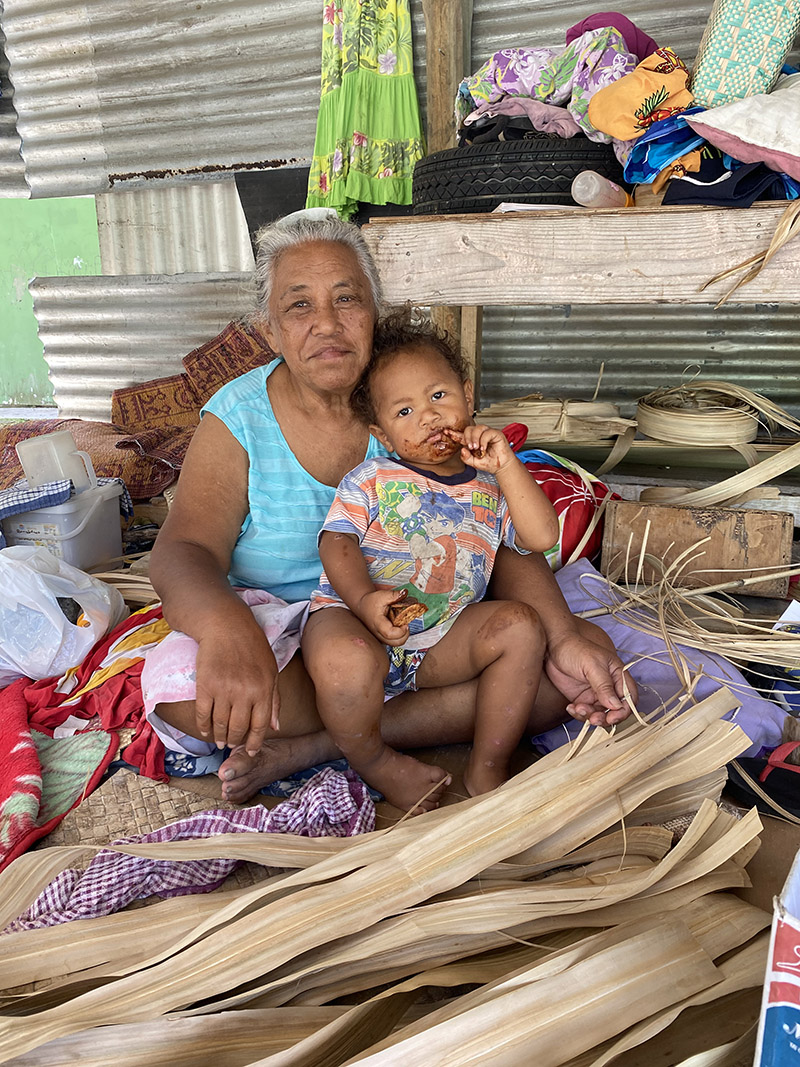 A mama on Mitiaro with her grandchild shares her weaving skills with Akisi Mussell and Laurie Stemm. 21101003

Rarotonga businesswoman Akisi Mussell shares her experience of how a six-day getaway to Mitiaro taught her about realising important priorities – through the minds and lifestyles of the local people.

After arriving on Mitiaro for the first time - Mussell says it feels like going back 30 years in time.

The island reminds her of what it was like growing up on the remote island of Savusavu in Fiji.

“In comparison to Mitiaro, Raro feels like a big city,” she says.

After being there a few days, Mussell realises that even though we think that we don’t have enough here on Rarotonga, “we have more than enough, when we compare what the people of Mitiaro have and don't have”.

Mussell travelled to the island alongside her friend Laurie Stemm, where they were welcomed and hosted by Divine Retreat owners Cindy and Junior Abraham.

They became friends with the couple. Two vibrant ladies welcome the Marumaru Atua crew on the day they arrived to Mitiaro. 21101004

Mussell recalls exploring the pristine caves, being amazed that the island has its own lake, feasting on ‘itiki,’ or the Mitiaro delicacy that is saltwater smoked eel, visiting the Queen of Mitiaro, and reef fishing on her last day before heading back to the airport and being farewelled  with fresh strands of souvenir neck eis to take back home.

“The people there are so laid back,” she says.

“Tourists come to Rarotonga and think that the people are laid back, but just the level of hospitality and warmth over there is so much more.

“People are genuinely hospitable whereas I feel that we have all been tarnished here in Raro by being busy and being driven by money.”

Mussell says the people of Mitiaro are hospitable to the extent that “they feel offended if you don’t come and visit when they know you are on the island”. “You don’t have to call and ask if it’s okay to come and they are not at all driven by money there, regardless of that opportunity to make money a priority.”

She shares as an example of how Cindy Abraham had the opportunity to create revenue out of weaving as it is in demand on the island.

“But for them, it is always family and community first, money and business after, if they have extra time.”

Some of the grandmothers on the island are happily raising their grandchildren so their own children can travel to the main island of Rarotonga for education and training purposes, Mussell shares.

“That is where their priorities lay.”

It was just like being at home and being part of a new family, Mussell recalls of her stay at Divine Retreat.

“I have a lot of admiration for Cindy and Junior. “They have lived in New Zealand for most of their adult lives but have moved back to Mitiaro, and even though they have their business, they equally focus on giving so much back to the community.

“They do something special that caters not just to tourists, but also for locals and friends from the other islands.

“They have really created a haven for anyone who wants to come and switch off.”

“I felt if somehow, we don’t lose ourselves like how it is over there, including keeping our culture and language intact, we can keep tourism but not let money drive us.

“We should follow the example of the outer islands, they know how to say no to what might come between themselves and what they really prioritise, which is their family, their culture, their language, and their community.’’

Mussell also shares her appreciation for the Mitiaro locals and their ability to stay in control with what they want and don’t want. Akisi Mussell on her way back home to Rarotonga with a farewell ei from new life-long friends at Divine Retreat in Mitiaro. - 21101008

As an example, although the ‘itiki,’ is the island’s most favoured delicacy, locals still prioritise maintaining ra’ui in the lagoons for the protection and preservation of the sea creatures.

“The outer islands are doing so much better in saying no to things that could affect their people, culture or environment,” Mussell says.

After returning to Rarotonga, she says that the mindsets and lifestyles of the people on Mitiaro have inspired her to apply the same principles of saying no to “what’s not good for you”.

Mussell was inspired to learn the Cook Islands Maori and has enrolled in Mike Tavioni’s conversational Maori class.

“I have been using the excuse that everybody speaks English here on Raro but that is no excuse. Exploring and enjoying the pristine Mitiaro caves with the Marumaru Atua crew. - 21101009

“I’m embarrassed that after 20 years of living here I still cannot speak the language, even on a conversational level.”

The journey to Mitiaro had initially been about taking a breather but Mussell says she came back having learned “much more about giving back, being mindful and focusing on wellness”.

“If you are a person who enjoys and wants quality time for yourself then Mitiaro is the place for you.

“There are not a lot of distractions, and you come back with the three Rs . . .refreshed, recharges and rejuvenated.”