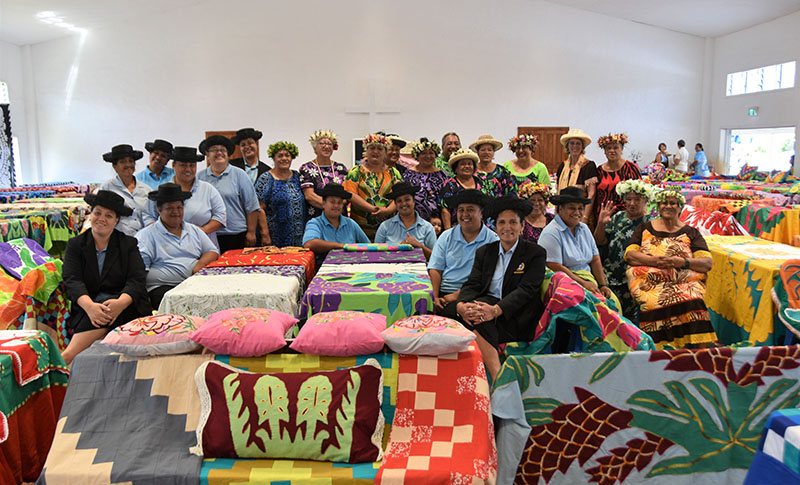 The CICC vainetini who have spent years to prepare for the tivaivai and handcraft exhibition. 21092418.

The “exceptional” and biggest exhibition of stunning and unique Cook Islands styled tivaivai, drew more visitors through the doors of the Ruatoka Hall yesterday after a grand opening on Thursday.

People who attended the show were dazzled by the vibrant colours of patterns and detailed unique designs, exclamations of “amazing, beautiful, breath taking…” were heard throughout the hall. There were some who were simply speechless.

“If I could stay the night in here with all this tivaivai, I’d feel like a queen,” says one of the Arorangi Ekalesia vainetini.

The Rarotonga Cook Islands Christian Church (CICC) vainetini (women) exhibition had been planned to coincide with the commemoration of the 200th anniversary of the arrival of Christianity to the island of Aitutaki, which takes place next month.

There was a mix of distinctive hand sewn tivaivai taorei (patchwork), tivaivai tataura (embroidery and crochet) and tivaivai manu (applique) that revealed the creativity and techniques of the talented vainetini and the time they have committed to a craft that they love.

A member of the CICC vainetini executive board, Poko Tuariki from the Arorangi Ekalesia says: “I’m proud and privileged to be part of this truly amazing art work by our vainetini. “It’s good to see that the tuitui of the vainetini is still popular among the Mama’s. It’s alive and well and there are also new designs coming in.”

The art of making a tivaivai is a journey – a journey that reflect personal connections and relationships, the sharing of good and challenging times and for some, an art that offers comfort and relief.

In 2018, Myra Tatakura returned to Rarotonga after intensive mitral valve replacement (heart) surgery in New Zealand, that had pretty much knocked her about.

Tatakura’s mother had taught her the three basic stiches, and a friend Trishia Downie invited her to join the Mama’s at the market as a way to “face the world” again.

That gave her the courage to get out there again.

“I had locked myself away from the world after I came home; I found solace in my sewing, it all started with a pair of cushion covers…”

The progress and improvement of her sewing skills are revealed in the stiches of her pieces. “I finally got the hang of it,” she says, and has completed 12 pairs of cushion covers in a year.

“This awesome show is also like my tivaivai graduation,” she laughs, “after these cushions, I’ll be graduating to sew a big tivaivai, I love it.”

“Thank you to my Mum, to all the women in my life for the support given to me throughout my tivaevae journey.”

Mamatira Patia from the Avarua Ekalesia featured an exquisite “tarona” crown patterned tivaivai taorei (patchwork) that she had completed with Mama Vaine Eliaba some years ago. Myra Tatakura proudly displays one of her 12 sets of tivaivai cushion covers. 21092318.

Tivaivai taorei is Patia’s favourite technique – a skill she was taught by the women on the island of Rurutu in French Polynesia, where she and her late husband were based in 1990.

Returning to Rarotonga as the Mama Orometua for Tupapa, she would get together with Vaine Eliaba, together they started the tivaivai “korona” and they have completed several pieces.

“In the past, pastors’ wives from overseas passed on their knowledge of sewing skills and techniques to our ui tupuna, to our women of the Cook Islands; our women are now skilful in these sewing and craft techniques,” says Patia.

Minora Manuela from the Nikao Ekalesia says her favourite style is the “taorei”.

Manuela learnt tivaivai in 2018. “It’s never too late to learn. When I joined I kept learning more and I really enjoyed it, I also do different styles.”

Mama Orometua Temaria Saitu-Marsters weaved an unusual designed rito hat for the first time – a design on the “v like” shapes on the edges of a shawl.

Along with the Ngatangiia Ekalesia, Saitu-Marsters also had a variety of tivaivai bed spreads and cushion covers on display.

Yvonne Marsters from the Takamoa Theological College, was “amazed, really pleased and proud” of the outcome of the event.

“There’s such a variety of the different skills as well as the extra hand crafts.” Mamatira Patia from the Avarua CICC Ekalesia and the stunning tivaivai taorei (patchwork) “korona” (crown) pattern, that was completed with Mama Vaine Eliaba. 21092315. Or 16.

Marsters and the Takamoa vainetini students were responsible for the CICC emblem tivaivai that took five months to complete.

Underneath is the original emblem, “we projected the logo onto the material, drew it and cut it out and put it all together. The crocheted edges were also sewn on, the intention was to have everyone to have a part in it,” says Marsters.

“It’s been such a journey and it’s so appropriate because of the Bicentennial celebrations of the arrival of Christianity.”

The Rarotonga Ekalesia of Avarua, Ngatangiia, Titikaveka, Arorangi and Nikao had created the exhibited pieces over a number of years and the demonstration of their art work embodies their love of tivaivai. Mareka Tini and Easter Teaurere from Penrhyn and their intricate rito earrings and crafts. 21092427. Or 26 Minora Manuela from the Nikao Ekalesia and her wonderful bedspreads and pillow covers. 21092424. Tina Wichman from the Arorangi Ekalesia had an outstanding water lily designed tivaivai. 21092433.