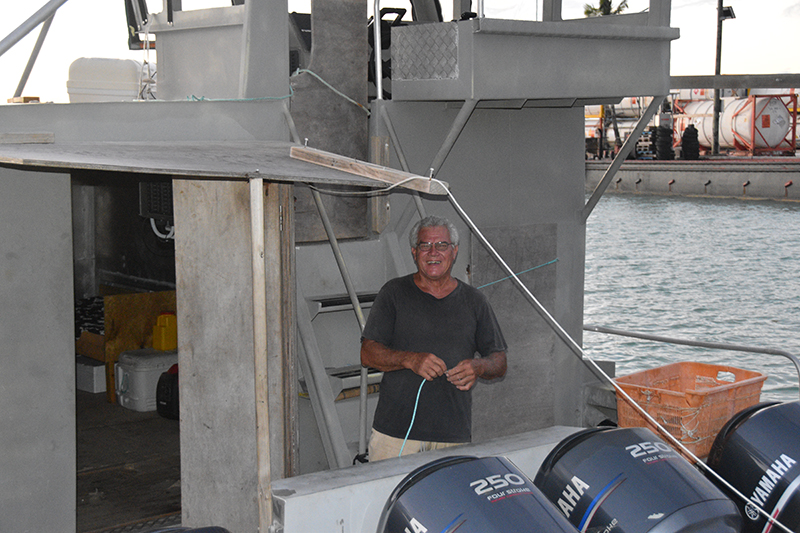 Master boat builder Teokotai ‘Tango’ Herman has been in the business for some 40 years and has built many boats but none bigger than the new Air Rarotonga aluminium catamaran he is currently working on.

“Just climb on board a boat and just go” – towards the horizon and visit the unique islands in the north, fishing and catching up with friends – is the idyllic retirement plan for Aitutaki master boat builder Teokotai ‘Tango’ Herman.

Herman has built boats since the age of 27, some 40 years ago.

The first maritime vessel he constructed was a 40-ton steel barge that was used to transfer the cargo from the ships into Arutanga harbour, the only internationally operated port that serves Aitutaki.

He then went into working with aluminium, and has just kept going.

Herman did his groundwork from scratch. He learnt how to weld in Aitutaki, moved to New Zealand to achieve certification, and returned to his home island to work the trade.

“You learn more actually by doing it,” he says. “Boat building is exciting; the exciting part is actually having the freedom to build her design.”

Herman consults with a maritime engineer friend in Auckland. “There are a lot of loopholes that you cannot afford to bypass; he guides me through turning it into shape …  and then eventually we have the christening of the vessel.”

Over the years Herman has designed and constructed vessels in a variety of shapes and sizes. He built the Air Rarotonga 21 metre cruise boat Vaka (catamaran) Titi-ai-Tonga that has been in operation since 1997; she was pulled out of the water in 2010 for a major facelift, refit and overhaul and was back in the water the following year ready for business.

The biggest boat Herman has built, which is yet to be completed, is the new Air Rarotonga aluminium catamaran that sits on the dock of Arutanga harbour.

It’s 8 metres wide by 26 metres in length, with another four to five months of solid work to get it done.

Moored in the Arutanga harbour is another vessel he constructed, Lady Nancy.

Launched in 2019, Lady Nancy is pretty special as she is named after Herman’s grandmother.

With a length of 21 meters and weighing 12 tonnes, Lady Nancy has four 250 horsepower outboard motors to powerfully navigate her on the water.

Her fuel consumption is very high, and he has plans to switch to diesel engines as he said it’s safer.

“She was purposely built to reach the northern group islands, and later it’s hoped she will become a charter vessel for places like Suwarrow, Palmerston, Nassau and Pukapuka.

“And she has the capacity to go right into the islands, right up alongside the beach like in Palmerston, and we can do the same in Nassau and Pukapuka – where other boats can’t.”

Due to the Covid-19 global pandemic there was an unfortunate and unavoidable delay in obtaining a maritime license for Lady Nancy.

Herman says they are still in the process of trying to get a shipping license to comply with certain requirements of the terms and conditions of the license.

“Last year was not a good year for everybody, so that put a hold on things, that held us back financially.

“We can still operate but we need to comply with the terms and conditions. We can only do these trips on a private basis and can’t charge commercially.”

Last month they took Lady Nancy to Suwarrow and back, “Eight hundred miles with no problems at all.”

On an earlier trip this year, Lady Nancy accomplished the first leg from Aitutaki straight to Penrhyn, 600 miles, without stopping.

From there they steered another 200 miles to Rakahanga to do some work, then across to Manihiki for a few days, continuing 280 miles to Nassau where they stayed for two weeks.

Then it was on to Suwarrow, back to Aitutaki, then to Palmerston and back: “We did a total of 2500 nautical miles,” says Herman.

“We want to use it and enjoy it and this actually makes it possible for us to go as far as Penrhyn, and to Palmerston, which is only 200 miles down the road.”

There are plans to extend the boat and eventually operate charters for cargo and passengers for the islands that don’t have an airport, like Nassau.

“That’s what I’d like to do down the line. If I could do that, I’d be happy to retire. The platform is there, we just need to find the business that will pay for the run.”

Lady Nancy will be the mothership in a Nga Pu Toru fishing expedition sometime next month. She will carry the freezer, fuel, food, petrol and cargo and smaller boats will follow along and fish.

With fishing a great passion of his, it was more than likely that he would venture into boat building. In 2015 he while living on the island of Manihiki building nine boats for some of the island’s pearl farmers, two Manihikians went missing while out fishing. Tai Herman set out alone in rough seas and saved the pair who earlier had been located by an RNZAF Orion aircraft.

Herman labours in his workshop with his long-time employee from Fiji; finding workers on the island is a challenge, he says..

“The difficult thing right now is labour, it’s very hard to keep our local boys. Some of our local boys expect to get paid high and don’t do the work. But, there are others who come along to help and want to learn more.”

There are also those who approach him wanting to order a boat without really thinking things through.

“People say ‘I want a boat’, I ask ‘What kind of boat? Then we talk about costs; then they say “Uncle Tango…” he chuckled.

And usually some sort of agreement is achieved.

Herman delivered two boats to Rarotonga a few weeks back; he has just completed the fishing vessel for Oire Nikao, and the island of Atiu. Depending on the weather, these vessels will be transported to their owners sometime soon.

What is the most satisfying about boat building? Herman is asked.

“The product turning into face and completing it, that’s exciting. Not only finishing the product but also knowing you’re going to get paid.

“Boat building is what we do and that’s what’s been keeping us going last year, and we could do a lot more.

“There’s really no limit to what we can do, we have the experience to build any vessel. The limit is the money; if you have it we can build it.”

Herman, who has served five terms as mayor of Aitutaki, says he just wants to get out of the workshop. “Just oversee things, just climb aboard the boat and just go.”