Fitness ‘can be fun’ but Aitutaki Liftoff is no joke 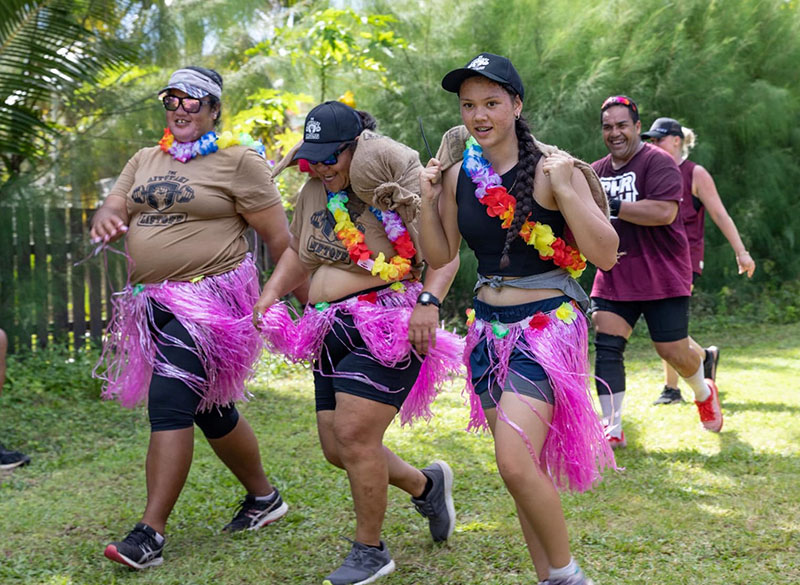 Dressed up with big smiles and cheer in the Aitutaki Liftoff team challenges. Picture: Alisha Street from Island Love Photography/21092061.

Fitness fanatics dressed up in hula skirts and florescent tutus pushed their limits across a variety of challenging trials at the inaugural Aitutaki Liftoff Fitness Festival a fortnight ago.

After initially being postponed due to the Covid restrictions in August, the first annual Aitutaki Liftoff Fitness Festival got into gear for an exhilarating and enjoyable event on September 10 and 11, becoming the first event of its kind to be hosted in the Pa Enua.

According to event organiser and owner of FuncFit Araura, Dani Adendorff, the event bounced back bigger and better than expected with 10 teams taking part in the team challenge and 10 in the weightlifting competition.

The Aitutaki Liftoff has brought together people of all ages, fitness levels and various backgrounds with the ages of the competitors ranging from 12 to 63 years old.

“It was indeed a great celebration of fitness and inclusivity, in one of the world’s most beautiful destinations, utilising the stunning landscapes of Aitutaki, from the lush hills to the white sandy beaches,” says Adendorff. “But most of all this event showed the competitors that they were all capable of so much more than what they had assumed prior to taking part.

“Competitors pushed their limits over a number of events which tested not only their team work, but their endurance, speed and strength.”

The event featured a great mix of lifters, from novice beginners to advanced athletes, all of whom put on an impressive performance for the large local audience who attended the event, says Adendorff.

Aitutaki'’ Iotua Orika from FuncFit Araura took out the special award of the night – the ‘Mana Award’ – for the most outstanding individual lifter.

“The Cook Islands Weightlifting Federation have identified Iotua as the next up and coming talent in the sport of weightlifting,” says Adendorff.

On Saturday the anticipated Liftoff Team challenge was launched and kicked off with an air of excitement.

This challenge had 10 four person teams who dressed up in costumes that included hula skirts and florescent tutus, pushing their limits across a variety of fitness trials.

The first event, the ‘Maunga Pu Madness’ sandbag run, was a two-kilometre round course which took competitors up the Maunga Pu hill and along the ridge line before turning back for a downhill finish at Paradise Cove.

Teams had to complete the course in the fastest time possible with two sandbags – 1x 10kg and 1x 20kg – sharing the load between them. In the second event, competitors met at Paradise Cove’s beautiful beach which resembled a scene similar to that of the popular TV series ‘Survivor’, Adendorff shares.

Huge bamboo A-frame structures towered on the beach decorated with event flags and large tractor tyre lying in each lane alongside a large six-foot wooden log.

The ‘Wadda Beech’ event included two separate challenges – the ‘Log event’ –a 12-minute event with log thrusters, burpees and lunges to test team work, coordination and physical endurance of all teams. And the ‘Relay event’ that was focused on speed; teams had to flip the tractor tyre over a marked distance, a relay then ensued as competitors had to carry and toss two sandbags over a six-foot bamboo crossbar in the fastest time possible.

“This event was a stand out for everyone on the day.”

In a report, Adendorff says Lani Simiona from FuncFit Araura showed incredible determination and perseverance as she struggled to toss her sandbag over the crossbeam with the crowd and fellow supporters getting behind her and cheering her on not to give up.

“Lani achieved what she had previously thought was impossible, there were tears of joy and hugs of celebration as the crowd roared in support of this demonstration of true sportsmanship and courage – she was a truly deserving winner of this year's team Mana Award.’

After three events it was off to the Ureia field for the final event of the day – ‘Motor Mania’.

This challenge involved teams pushing and pulling a truck across a distance of 100 metres – stopping every 25m to complete an allocated number of squats, ground to overhead and box jumps at each station.

Every team were in high spirits, high fives were all around as participants hugged one another as they crossed the finish line to conclude a tough but incredible day of fitness.

Adendorff was thrilled with the outcome of the event that saw all the competitors walk away “with a sense of achievement and pride”.

“But, most of all we hope to have highlighted the importance of fitness in our community, and hope to show our people that fitness can be fun, and is something that everyone can partake in.

“We had a number of local families form teams and take part together which was very special – mum, dad and children, moving together and putting their health first. “And I’m sure none of the aunties who took part imagined they would ever be pulling a 1 tonne truck in a pink hula skirt… At the end of the day everyone had fun, no one was injured, everyone has made memories and new friends, so all in all it was a fantastic success and we are gearing up for an even bigger and better event in 2022.”

The prize giving awards that was held at the Aitutaki Game Fishing Club, included a delicious dinner with meats sponsored by Prime Foods and catering provided by Avatea Cafe.

“Thanks to the incredible support of the Aitutakian community, our FuncFit members, my right-hand man Stephen Doherty, our fellow fitness community in Rarotonga at Tumuora CrossFit and of course our generous sponsors, including our top line sponsor, Cook Islands Tourism. This event was everything we had hoped for and so much more; and thanks to Alisha Street from ‘Island Love Photography’ and John Beasley from Akau Film. “Congratulations to all competitors for getting out of their comfort zones and celebrating health and fitness together as a community.”

Adendorff has big plans for 2022 and is excited to announce the launch of a Youth Liftoff early next year. “The health and wellness of our local children is very close to my heart,” she says.