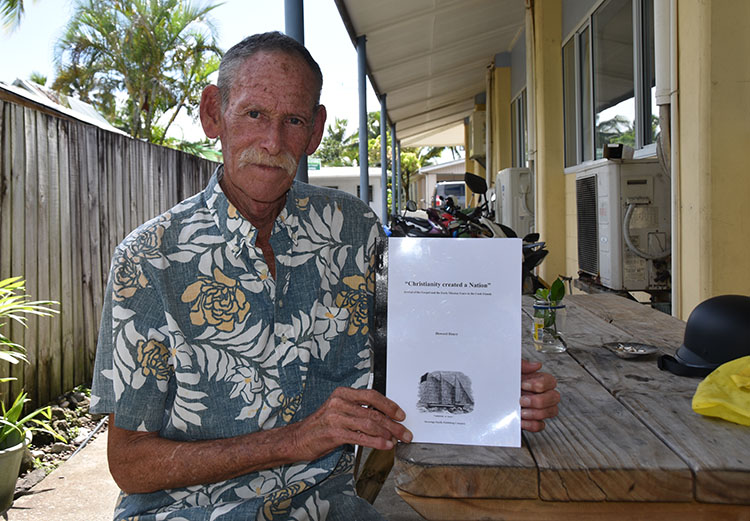 Author Howard Henry with a copy of his book ‘Christianity created a Nation’. 21082021

“Christianity created a Nation” is a book about the arrival of the Gospel and the early Mission Years among those islands later to be known as the Cook Islands, writes author Howard Henry.

Aitutaki was the first island to receive the Gospel after Reverend John Williams took Papehia and Vahapata to that island on 26 October 1821.

In the few short years that followed, John Williams took “native teachers” from Raiatea and so brought the Gospel to Atiu, Mitiaro, Mauke and Rarotonga in July 1823. The Missionaries Reverends Tyerman, Threlkeld and Geoge Bennet took the Gospel and two “native teachers” to land at Mangaia on 15 June 1824.

In later years between 1849 and 1863, the Gospel went on to land at Manihiki, Rakahanga and Penrhyn before arriving at Pukapuka and Palmerston.

Many people on these islands stubbornly refused to accept the Gospel for several decades after Christianity first landed. Pockets of anti-Christian believers continued to live on these islands into the 1840’s. These people eventually died out still holding their faith to their traditional idols of the past.

But Christianity brought not only a new religion to the people of these islands, but the Gospel also brought a completely new way of life and a vastly different type of human civilisation compared to what people had been living during the previous years.

For those living in the Christian community, there was no more fighting. There was no more killing. Violence through tribal or family conflicts were a thing of the past. Homes and places where people lived were much superior to what they had known before. European style clothes became fashionable and much preferred to those clothes worn during the pre-Christian era.

So people were much happier living in a Christian environment to what they had been.

They came to believe that the Lord in Heaven was a loving God who loved all his children. They came to understand that the Lord had never been of the human form like Jesus Christ. But rather, God was a “Spirit”. And that “Spirit” was everywhere, all the time.

The arrival of the Missionaries and “native teachers” to various islands were later followed by numerous other Europeans who were not all of the same Christian caliber.

As a result of this, the people of Rarotonga in particular, suffered greatly during the years from 1850 to 1890. This came from a wide variety of imported diseases and epidemics caused from time to time by such illness as whooping cough, measles, elephantitis, leprosy and tuberculosis, to name but a few.

Throughout these years, there was no doctor on Rarotonga. There was no hospital. There were no medicines.

And so vast numbers of people simply “suffered in silence” and hundreds of them died.

During the time John Williams lived on Rarotonga from May 1827 to April 1828, he estimated the population on the island to be about 8500 people. When the British Resident Frederick Moss undertook the first census on the island in July 1895, he concluded the total population to be 2457 people.

The reason for such a drastic decline in numbers, was because so many people had died in the preceding years from a wide variety of imported diseases. During these years, the people of Rarotonga had no medicines, no vaccinations and had no immunity. The idea of medical assistance to those in need simply did not exist.

But the arrival of the Gospel brought many positive effects to all those who lived and embraced the Christian faith. It brought peace and harmony to all these island communities. It brought the concept of helping each other in a loving sort of way.

It brought a better quality of life and a higher standard of living that was vastly superior to that which so many people had lived during the final years of their existence during the pre-Christian era.

“Christianity created a Nation” is a book of many stories concerning a whole series of events following the arrival of the Gospel to Aitutaki on 26 October 1821.

“Christianity created a Nation” is a publication of 274 pages that include various illustrations and maps. This book is now on sale at the Bounty Bookshop in Avarua, Rarotonga.