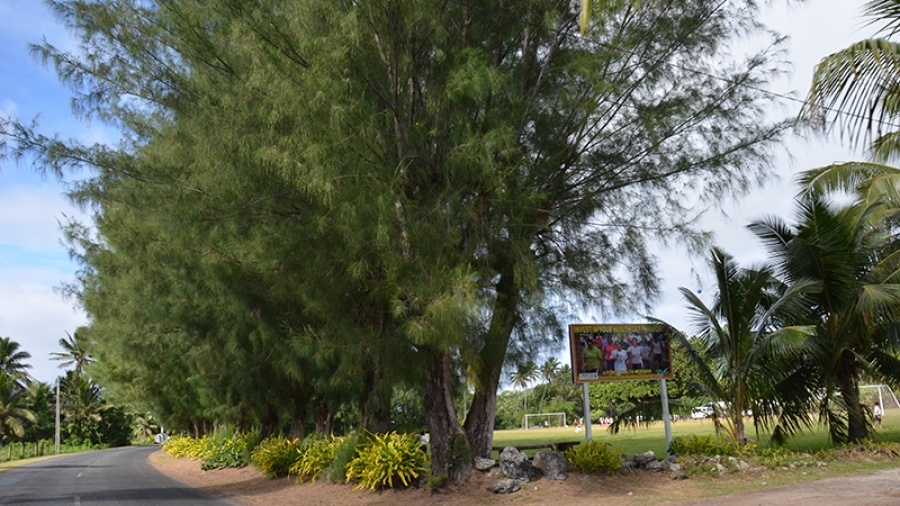 Well-loved toa trees in front of Takitumu primary school have been saved from the axe – for now.

Concerns about the ironwood trees were raised by villagers, after seeing roadside hedges and trees removed at Tupapa. Roadworkers had previously told them the trees would go.

But now, Infrastructure Cook Islands has indicated they won’t chop any of them down, when works begin there in a few weeks, without consulting the community.

Roading boss Gareth Clayton said they intended to preserve all trees, unless they impeded on the road’s safety and drainage.

A review of the safety and drainage impact of the area would be completed in a few weeks; depending on the outcome, landowners and stakeholders will be called to discuss the future of the toa.

The main road works have already required a number of old trees to be uprooted and cut back for safety reasons, including some of the grove of 170-year-old utu trees a few hundred metres up the road.

The toa trees are not so old: they were planted at about the time the school opened in 1963.

“These trees are part of the history of our village, I remember planting them with other students in the 1960s just after the school opened,” he said.

Vogel and his classmates were moved from Ngatangiia school to Matavera with their teacher Mana Pierre Tutangata, “who instructed us on what to do.”

“I won’t forget it, first we had to level the field by hand using just had a spade and a crow bar, we had to break down the rocks to flatten the ground.

“It was a big job, it took us nearly a year, working on that field every day.”

When the field was flat, then the trucks came in to deliver dirt, “we then had to sift through the dirt to get rid of the taratara (prickly weeds), we would have competitions to see who could pull out the most.”

Then the toa trees were planted, each student note of which tree they planted.

Of the 30 trees, Vogel is confident he planted four.

“It took a lot of hard labour in those days, it is good to see our kids enjoy the playing field and that its used for many sports.”

The trees are good windbreakers and helps protect the kids from vehicles on the road, Vogel said.