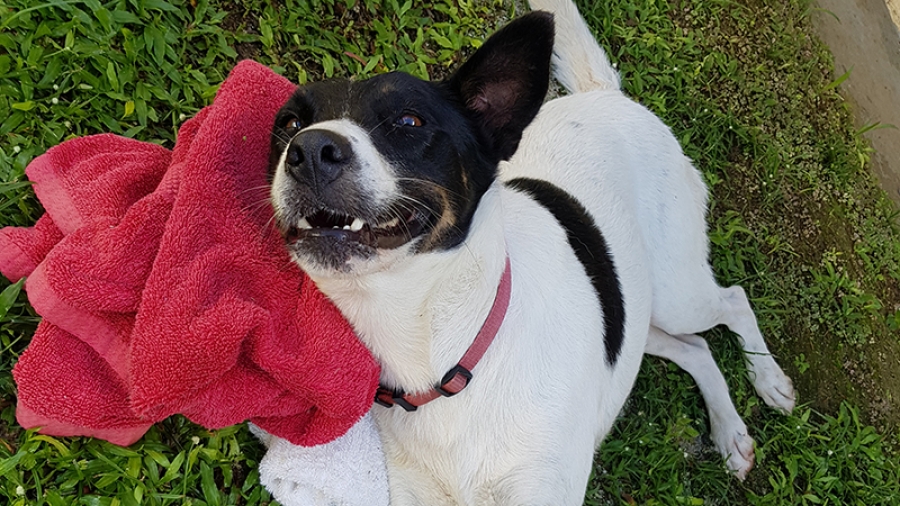 Kusu from Vaimaanga was admitted to Te Are Manu vet clinic this week with fish poisoning. 20042309

OPINION: The marine organism that is poisoning people and animals flourishes in areas impacted by cyclones, reef-blasting, or even ship wrecks, writes Kelvin Passfield from Te Ipukarea Society.

During these Covid-19 days, many people in Rarotonga either have more time, or less money, or both. As a result there has been an increase in people catching reef fish, either for their own consumption, or to sell.

As reported last week in Cook Islands News, there has also been an increase in people and animals, getting poisoned with ciguatera.

Ciguatera is caused by a small marine organism, a dinoflagellate called Gambierdiscus toxis. This often flourishes in areas that have been impacted by cyclones, reef-blasting, or even ship wrecks, as it is thought that it likes to settle on newly exposed surfaces.

Pollution from land-based sources such as sewage is also thought to promote the growth of these dinoflagellates. Fish that graze on these newly exposed surfaces then introduce the toxin into the marine food chain, from where it can end up inside us.

Symptoms generally begin six to eight hours after eating the contaminated fish but can occur earlier or as much as a day later.

The latest case we are aware of is not in a human, but in a dog named Kusu from the Vaima‘anga area.

Kusu was brought to Te Are Manu vet clinic on Wednesday looking very sad, unable to stand easily and with a very wobbly walk. According to senior vet Ellen Mcbryde, there is not much they can really do, apart from medicate to relieve stress.

Fortunately for Kuso, he only had a mild case and is back home now.

Given the risks, people may want to reconsider eating these reef fish from the lagoon.

But this does not mean you cannot eat fish. An alternative, of course, is to eat pelagic (offshore) species such as maroro, tuna, wahoo, marlin, mackerel scad (ature) and spearfish.

Perhaps also, as a result of changes because of Covid-19, there appears to be a lot more of these offshore fish on the market, and the price is down 50 per cent from pre-virus days. This is no doubt partially because there are no tourists here eating fish and chips, and supply is starting to exceed demand.

I remember when I was working for the Ministry of Marine Resources over 30 years ago, tuna was commonly sold for $6 to $7 per kg for whole fish. Today it is sometimes going for $3 to $5 per kg.

And the good news is these offshore fish do not cause ciguatera poisoning.