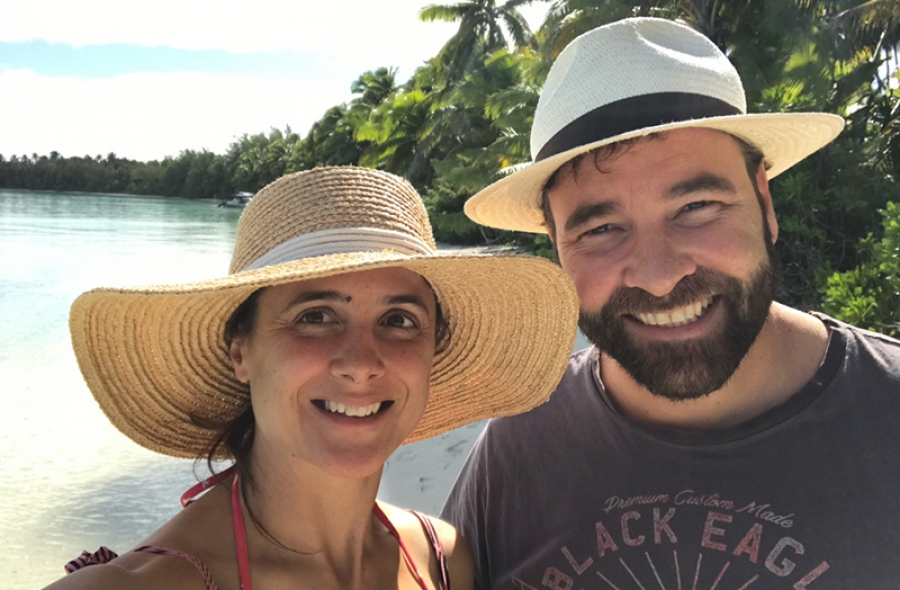 Penny Witt and her partner Christopher Watkins, the first ever Australian High Commissioner to Cook Islands, on Aitutaki for World Oceans Day this week. 20061008

Despite landing in Rarotonga as Covid-19 gripped the globe, Australian High Commissioner to Cook Islands Dr Christopher Watkins has hit the ground running.

In three months, he has helped with a beach clean-up in Nikao and Panama, presented new safety vests to the police and organised rapid Covid-19 diagnostic kits to be freighted on the same flight as the first group of returning Cook Islanders.

“My partner Penny and I visited Aitutaki for the first time this weekend. It was a quiet trip to take a break and support the local economy. We attended a service at a local church, took a cruise on the lagoon, and swam with a giant trevally,” he said.

“As we crossed the famous lagoon by boat it was an opportunity to reflect on the importance of the Pacific Ocean which connects Australia and Cook Islands.”

For decades, Australia has campaigned for the protection of whales. It is a very emotional issue for many Australians, Watkins said.

“We are in awe of their intelligence and beauty, and we have long argued that the international community must ensure our children and grandchildren have an opportunity to experience that same awe.”

For those countries with strong traditions of whaling, Australia’s position has not always been popular. Australia has the third largest maritime jurisdiction in the world.

“The oceans around Australia are vital to our environment, heritage, lifestyle, security and economy,” he said.

“Cook Islands has an even stronger relationship to the ocean, born of the rhythms of island life.”

While both countries have a history of whaling, Watkins said both have come to treasure the annual migration from Antarctica, as these magnificent creatures trace the countries’ coasts.

Aitutaki’s pristine waters are a reminder of what is at stake, he said.

“Australia is campaigning to end the use of single-use plastics in the Pacific, and to prevent other types of pollution,” he said.

“We will need to work closely with other Pacific countries and learn from what they have done to protect their oceans.”

Watkins said he and his partner are yet to see a whale off the coast of Rarotonga, but every morning they stand near Black Rock and scan the ocean with their binoculars, hoping to glimpse a giant.

“We want future generations to have that same sense of anticipation.”