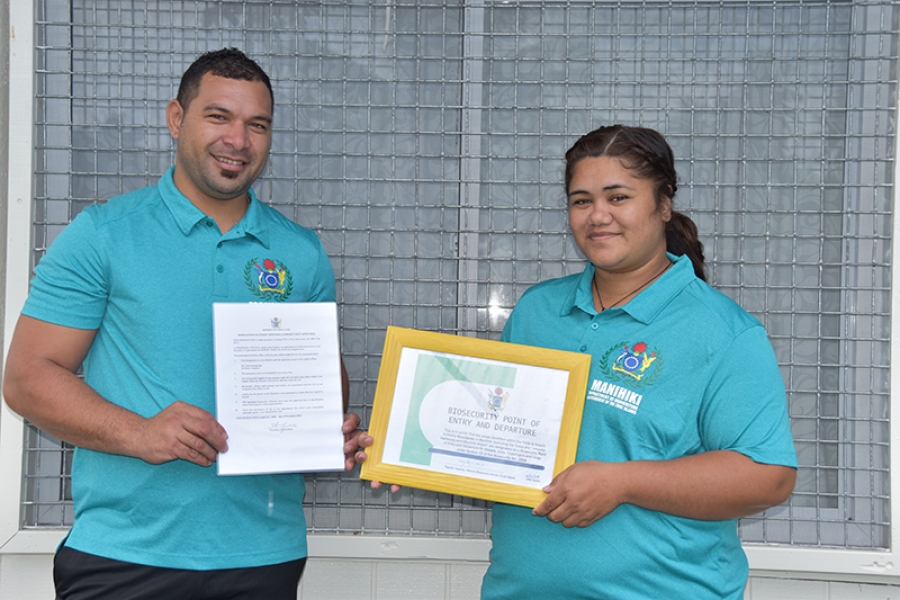 As a way of ensuring that Cook Islands border is protected, outer island agriculture officers are undergoing a special training to be part of the biosecurity team.

Yesterday, Manihiki Island officers officially received their warrant as biosecurity officers from the Ministry of Agriculture.

Director of the biosecurity division, Ngatoko Ngatoko said the officers Kaina Karaponga and Raita Vakapora have been in Rarotonga for about a month on biosecurity training.

Vakapora, 27, said she now felt more responsible in protecting the borders of the northern group and not just Manihiki.

Karaponga, 29, said he has been with the Ministry for four years under the Island Government but the training has finally given them a chance to be proper officers.

The ministry also awarded the ports and airport of Manihiki (Tukao and Tahuunu) as a designated Biosecurity Point of Entry and departure for vessels, crew, passengers and cargo under section 10 of the Biosecurity Act 2008.

He said for them this is a milestone.

“Now the port of Manihiki can welcome cruise ships or anything from international waters,” Ngatoko said.

He said a similar training was planned for Pukapuka, however, due to the suspension of the boat the officers could not attend the training.

Secretary for Agriculture Temarama Anguna-Kamana said every outer island has an agriculture officer but they were never designated or warranted as biosecurity officers.

“The ministry did the training for all the southern groups. We are now moving the same capacity building training to the northern group, so Manihiki is the first brought in.

“To protect our boarders we need to upskill the officers,” she said.