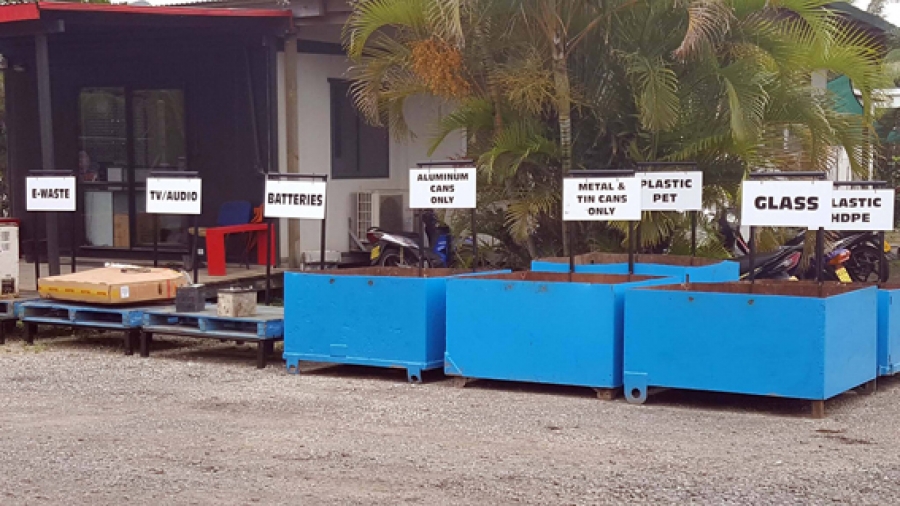 Cook Islands General Transport (CIGT) has begun a new recycling initiative, opening up the opportunity for people to recycle a magnitude of products.

Conveniently located in Avarua, the concept operates outside of the domestic collection days, and collects products that could not previously be easily disposed of, free of charge.

In a Facebook Post on “Rarotonga Community &amp; Beyond”, General Transport director Jessie Sword said products that could be recycled at the new station included whiteware, plastic (PET and HDPE), e-waste, television and audio equipment and batteries.

Sword said e-waste was funded under the Pacwaste programme. A second round of funding had been approved, meaning the free recycling of this product depended on resources and may only be free for a limited time.

Due to processing and export packaging requirements there was a small charge for recycling whiteware, she added.

Sword said the small fee had generated some negative feedback.

“But like anything, you can’t please everyone all the time, and when it comes to paying for services you will always come up against people reluctant to do what needs to be done.

“However, we are always looking for funding streams to assist people in making the right decision and to make recycling part of their everyday lives.”

The Cook Islands face a range of challenges surrounding the management of waste. Due to the country’s small size and isolation, disposal of rubbish has significant costs, both environmental and financial.

The need to manage waste properly is regularly discussed and debated and takes on new significance when it is apparent there aren’t many options for a new landfill on Rarotonga.

So, news of the new recycling station has been welcomed, accumulating over 300 “likes” on Facebook in just under 12 hours.

“The public’s reaction has been absolutely overwhelming. It’s great to see the enthusiasm of the community to get behind these environmentally-proactive initiatives, the public should be applauded for making the right stand when it comes to recycling and doing what is best for our Ipukarea!” said Sword.

Te Ipukarea Society (TIS) technical director Kelvin Passfield has plenty of praise for Cook Islands General Transport: “They are doing the socially responsible and environmentally responsible thing” in taking in unwanted plastics to get them out of Rarotonga.”

“It will be a permanent concept with moves to grow the operation as the demand increases.”

Sword urged the public to keep working together to solve the rubbish disposal issue.

“Sort your rubbish at home or work, bring it in, and don’t hesitate to call our helpline, 24441 or discuss any concerns with TIS, Infrastructure Cook Islands (ICI) or National Environment Service (NES).”

TIS, NES and ICI are working together with private sector partners, CIGT, Cook Islands Trading Corporation (CITC) and T&amp;M Heather in an effort to reduce the waste streams to Rarotonga’s landfill.