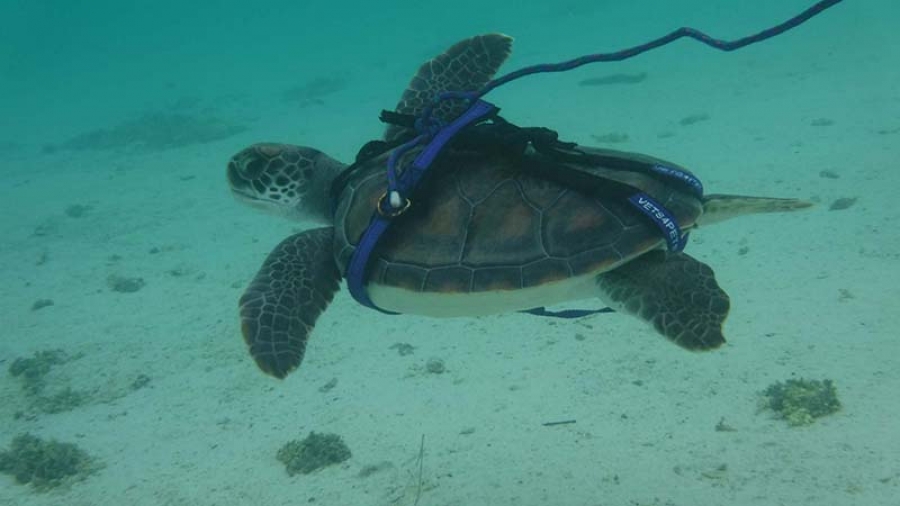 Ponu having a great time in the lagoon, learning to be a turtle and getting ready for her release. Here she is swimming in the lagoon near the Rarotongan before her final release. MARINE AND WILDLIFE ECO CENTRE / 20060914

Miracle turtle Ponu is to be released into the wild on Sunday – and our children are determined she won’t face the same threats that kill other turtles.

The message was as clear as the dangerous debris floating in our oceans: pick up any plastic in or around the lagoon.

Sea turtles eat plastic waste because a clear plastic bag can look like a lot of jellyfish, algae, or other species that fundamental to their diets.

Teacher Shannon Harris said students were shown a video illustrating the difference between a plastic and a jelly fish and its harmful effects to marine organisms.

“One of the most important messages we received is to look after their environment and to make sure we pick up any plastic in or around the lagoon, to prevent our turtles eating it.”

She said the most exciting part of this week’s celebration is marking green sea turtle day on Sunday, with the release of Ponu the turtle at the Avaavaroa Passage.

When Ponu was found floating and near death in Avatiu Harbour, there wasn’t much hope for her survival. She was floundering in the sea, her flipper bones broken, her pelvis busted, her carapace white and soft.

Volunteers worked desperately to save her, nursing her back to health in a purpose-built tank at the Discover Marine and Wildlife Eco Centre in Arorangi.

Yesterday, Eco Centre manager Stephenie Jansen said education was such an important component in the conservation of turtles.

“The kids were very engaged and obviously had a real affinity to our turtles. We are incredibly lucky to have Pacific green turtles in the Cook Islands, and we need to make sure they are here for the generations to come”.

The turtle society’s Julie Tamaariki said this week started with World Oceans Day, and the start of Sea Turtle Week, focusing on the seven species of turtle and the threats to them over the seven days.

Yesterday was flat back sea turtle day, and the threats (all the daily threats are relevant to all turtles) and through the week they discuss about all the species with green sea turtle say on Sunday, the day of Ponu's release.

She said one of the messages they tried to get across at the school was on what people can do to help with reducing the threat of extinction and how lucky it is to have turtles in our own back yard, especially the critically endangered Hawksbill Turtle.

She added that this week is a great week to engage in education with the schools, and there was a lot to do in this area and not only with the schools but other community groups as well.