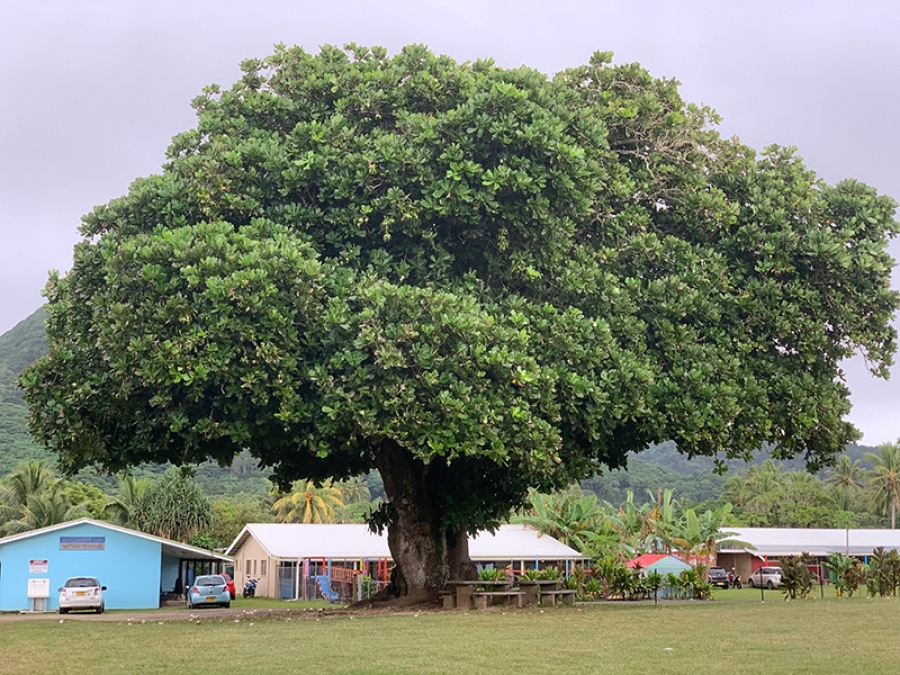 The grandest remaining 'utu on Rarotonga lives in the Takitumu School grounds at Matavera. 20052801

OPINION: Cook Islands Library and Museum curator Jean Mason is passionate about the conservation of trees. She believes that if we can identify trees, especially tupuna trees, they can be pruned to make sure they live on for hundreds of years.

The ‘utu tree (Fish Poison Tree; Box Fruit; French Bonnet; Barringtonia asiatica) is native not only to Rarotonga and the Society Islands but also to Madagascar, which mitochondrial DNA tells us became a western outpost in the Indian Ocean of the great Polynesian migration which primarily traversed the Pacific.

This suggests the Polynesians may have taken the seed with them from Asia.

The most useful parts of the tree were its fruit and wood. Although generally considered inferior to other timber its wood was used in canoe parts, from which we get ’utu mua and ’utu muri – the stern and bow covers.

Its fruit contains a poison which in small doses acts as a narcotic used to stun fish. The poison was obtained by breaking open the four-angled fruit, extracting the seed and then grating it. It was either sprinkled on top of the water, or for a more effective fishing exercise was rolled into a ball and placed in a kikau basket in shallow places in the lagoon, or in holes in the reef, where there was little circulation of water. Fish struggling to the surface were then picked up or scoop netted; narcotised fish not caught could recover.

On virgin land, or in a natural forest, ’utu grow in groups, creating a thick, dark forest, which adds to their mystery. Unfortunately, they are being eradicated at an alarming rate on Rarotonga, with just a handful of large trees visible on the roadsides today.

Until recently, there was a magnificent specimen next to the cemetery, opposite the Game Fishing Club on Rarotonga, although it had been trimmed back quite severely a couple of years ago, it was completely removed this year.

It had the largest girth of the surviving ’utu trees of Rarotonga, about 12 metres. Now it’s gone. The grandest remaining ’utu on Rarotonga lives in the Takitumu School grounds at Matavera. Long may it reign over this village.

There are still unspoiled forests of 'utu in Ngaputoru (Atiu, Mauke and Mitiaro). According to local lore, some ’utu trees were used for executions in ancient times: e nga’i tarī tangata (by hanging).

’Utu trees, being long lived, were also used as boundary markers. A preparation of the seeds was used as a dressing for burns and ’utu leaves were used as wound dressings also.

Generations of children having been convinced by their elders that these trees were entertainment spots, a night club if you like, for ghosts with a penchant for dancing.

Although no one seems to have actually seen ghosts dancing under the trees, everyone knew they had the night before because the leaves that fell from the tree the next day had pink stains on them.

The number of pink spots indicated the number of ghosts that had been present at this spectral dance fest. For other people the indicators were not the leaves but the large number of flowers on the ground the next morning (’utu being a night bloomer). The ethereal appearance of the flowers, with their pink and white stamens and sickly sweet, intoxicating fragrance, probably contributed to these superstitions.

The last major clump of these trees on Rarotonga at Karekare, known as Te Mimiti o Apera (Abel’s Head), is the home of the infamous ghost pig which has been sighted numerous times by locals and tourists alike, and has caused a couple of motorcycle accidents when the drivers tried to avoid the ghost pig as it suddenly appeared in the road. Motorcyclists may wish to keep in mind when interviewed after their next accident the ghost pig might provide a more credible alternative to the now hackneyed ‘a dog ran out on the road’.

Although the proto-Polynesian meaning for the word ’utu is ‘revenge’, a meaning which persists today in the Maori language of Aotearoa, this meaning is no longer part of the lexicography of Rarotonga or Tahiti (where it had a similar but slightly different meaning).

However, it may be that the Cook Islands Maori word utunga meaning, retribution; punishment derives from this.

But there is nothing to suggest this magnificent and mysterious tree has a connection with any of the other current or historic meanings of the word ’utu.

It is a verdant tree with large leaves that creates a welcome shade in the summer months. It grows well in the sandy earth close to the coast and its expansive roots make a great stabiliser when bad seas try to steal our land.