Showing our stories to the world 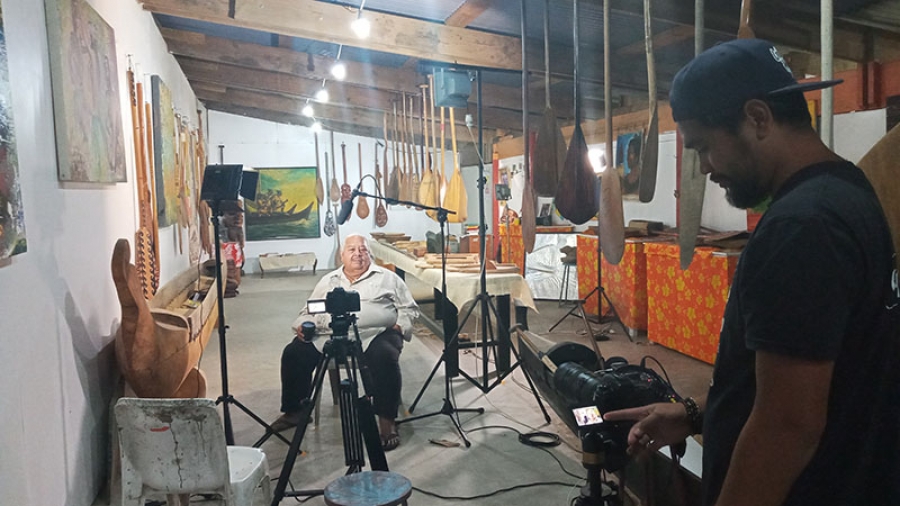 Moves to market Cook Islands to the world as a film location have sparked a challenging discussion: Are Cook Islanders ready to run their own film industry, or is this a chance to learn from international actors, directors and crew?

Did you go to Te Mire Ura dancer of the year on Thursday night? Of course you did – just about everybody on Rarotonga was there.

And as you hustled for a seat in the jam-packed National Auditorium, or stood on tiptoes watching from the entrance, or settled for a plastic seat in the overflow area in the domes watching the big screen, you were bothered and distracted by crowd and the bustle …

And then the room darkened and the screens flickered to life and from high in the sky you found yourself looking down over the incoming surf – and all the stress of the day somehow drifted away just as the camera drifted down the beach.

The song Hula Mai by Jarome Pare started, and the dancers stepped up, and you were taken away somewhere else.

That’s the magic of film.

That music video was made by a 21-year-old videographer named Nicholas Maui, who has his own company, Laheiva Productions.

It is talented young Cook Islanders like Maui, who dare to dream of Hollywood and Bollywood and the world, who are at the centre of a compelling new discussion about bringing international film crews back to Cook Islands.

The Prime Minister’s chief of staff, Ben Ponia, is calling a meeting of a few arts and tourism movers and shakers to discuss how film can be part of the new economy, when the borders open and the world returns to Cook Islands.

They are considering a draft marketing strategy designed by Ada Mazurek, of international film locations agency Destinations Rising, to market Cook Islands to the world’s movie-makers.

“We would like to make the Cook Islands be seen by global media and screen content production professionals so the country and its citizens can benefit from highly valuable production spend and the knock-on ‘soft power’ effect of screen tourism traffic,” Mazurek tells Cook Islands News.

Mazurek says having a popular movie set here can typically boost tourist numbers by 31 per cent – and it’s not just the creative industry that benefits. Two thirds of the production budget will be spent in other sectors like accommodation, retail and hospitality.

Most importantly: “The development of the film industry will also provide new employment opportunities for local people; the sector has the massive potential to generate new jobs.”

Mazurek and Wolfgramm describe a strategy in which Cook Islands partners up with the New Zealand Film Commission and production houses there, to bring over the gear and technical expertise to film here – but the deal would be that those New Zealand crews would train and mentor locals to step into their shoes.

Top officials here are cautiously upbeat about the proposal. “We are in support of this project through promotion of our cultural creative industry,” says Anthony Turua, the Secretary of Culture.

And Cook Islands Tourism chief executive Halatoa Fua says: “The discussions with Ada were pointed towards a policy framework required by Government to position the Cook Islands as a film location destination. A comprehensive Government policy is required before a marketing strategy is considered as the call to action.”&gt;

She’s always worked in partnership with creatives and producers around the region and around the world – but she says the Covid-19 travel shutdown forced her to change direction.

The documentary will be produced, directed, filmed, sound-teched, edited, and post-produced locally, she says. “I have New Zealand documentary filmmaker Lala Rolls and people like Chelsea Winstanley and Karin Williams providing advice and support, not just to me but to my crew.”

The documentary is receiving offshore interest and she is discussing distribution and festival opportunities already, with interested parties. She has also set up a Givealittle.co.nz page where people can support the making of the doco.

Tuaine is really supportive of international film options and locations opportunities for the Cooks. “However, my push is for our local creatives to seize the day and be the filmmakers and not the runners, unit or assistant.

“We have the skills right here to make digital film and be leaders in the creative industries and many Cook Islanders are doing just that.

That can’t happen this year until November at earlier (Covid again!) so he’s turned his attention to curating a short Queer Films festival, in partnership with Pride Cook Islands’ campaign to decriminalise same-sex relationships. It’s set down for late next month, all going well.

But he’s also working with others on a film, which they hope to shoot in Cook Islands next year. He’s keen to walk a careful line between those who believe Cook Islands film creatives are ready to do it all themselves, and those who believe the country needs international crews to come here first, to show us how it’s done.

For Baker, it’s all about the story. He’s happy for us to bring over technicians and other experts to help out – as long as the stories being told are Cook Islands stories, written and directed by Cook Islanders. Everything else will fall into place naturally behind that.

“I think we should tell our own stories, having us be the writers and directors, not just the soundies and the gaffers,” he says.

“People say you can’t start as writers and directors – that you have to being as a PA or whatever, and limb up the ladder.

“But we live on an island, in the middle of the ocean, we’ve got our beautiful backdrops, we have got the myths and legends of the Pacific, and we’ve got locals who have those stories. It’s time we start telling them.”

So where does this leave Nicholas Maui and those starting out in the industry?

Maui believes we already have a lot of semi and skilled photographers and videographers and graphic designers who can excel in professional production. The Manatua Cable, which went live last week, opens up a huge opportunity for them.

“We will soon be able to produce a wide variety of material for Hollywood or Bollywood directors and producers who don’t even have to leave their studios in Los Angeles or Mumbai,” he argues.

“They can direct real-time from their offices. We can shoot background stuff, upload to them, and they superimpose actors into our videos. The cost of location shoots will be much lower.

Things will eventually get back to normal,” he says. “For me, I’m really interested in linking up with with Hollywood and Bollywood producers and directors to help them make movies with a Cook Islands background.

“I’m still young and I will keep my eyes open for opportunities in photography and videography – in this country and overseas.”