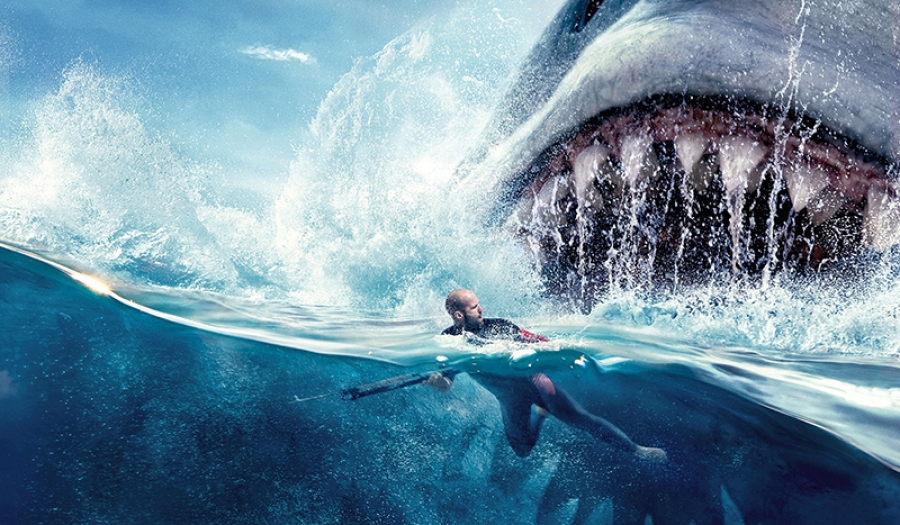 Jack Morris (Rainn Wilson) is ready to see a return on his investment.

The billionaire has flown to the world-class Zhang Oceanic research institute he helped fund to witness the discovery of a whole new world.

A three-person submarine is breaking through what was perceived to be the ocean floor, but is actually an ice layer.

Deeper than the Marianas trench, it will potentially be home to all sorts of species hitherto unknown to science. However, something clearly doesn’t want them to be there. No sooner are they at 11,000m when the trio’s vessel comes under attack, denting the hull, damaging their systems and leaving them trapped with potentially less than a day to live.

Chief marine biologist Suyin Zhang (Li Bingbing) prepares to mount a rescue, but station chief Mac (Cliff Curtis) knows there is only one man capable of pulling off such a mission: Jonas Taylor (Jason Statham). He has already saved 11 people in a similar situation, but also had to leave others behind – something which weighed heavily on him.

The emotional fallout led him to a Thailand beach, where he’s remained since mostly in a “medicated” state.

However, Mac is determined to get his man, armed with the revelation that one of the trapped triumvirate is Jonas’ ex-wife Lori (Jessica McNamee). Reluctantly agreeing, Jonas is unimpressed to find the doctor (Robert Taylor) who condemned his earlier actions at the institute and is convinced that what’s causing all the mayhem down below is neither friendly or possible to combat.

Jaws for the Shark Week generation, its actually hard not to compare Jon Turteltaub’s (Phenomenon, National Treasure) action-horror to the similar tale it avoided almost two decades ago. An adaptation of Steve Alten’s 1997 novel Meg: A Novel of Deep Terror was all set to go until it ran headlong into a competing project – the Samuel L Jackson-starrer Deep Blue Sea.

While this doesn’t possess “super-smart” sharks, it does have a “massive prehistoric killing machine” and shares Deep Blue’s laboured plotting and (for Hollywood anyway) ethnically diverse cast. Naturally, most of them are two-dimensional chum, forced to deliver great chunks of expository dialogue.

Yes, as you probably could have guessed from the premise, this follows the Michael Bay-school of action, where any science is secondary, one-liners abound, heroic sacrifices and product placements are key and non-lethal options just ain’t an option.

Scriptwriters Erich and Jon Hoeber (Red) and Dean Georgaris (Lara Croft: The Cradle of Life) do their best to keep the story and action afloat, but it’s hard to ignore the cod psychology at play and fishy logic used to draw this pulpy premise out to nearly two hours.

Committing fully to everything here, including rescue-induced psychosis, Statham does everything from bond with adorable moppets (Sophia Cai) to going toe-to-tail with the eponymous Megalodon with a wink, a smile and a healthy dose of world-weary cynicism.

In the end, he’s really the only thing that saves this “Sharks on a Boat” from sinking to a forgettable fate.