From dust to digital 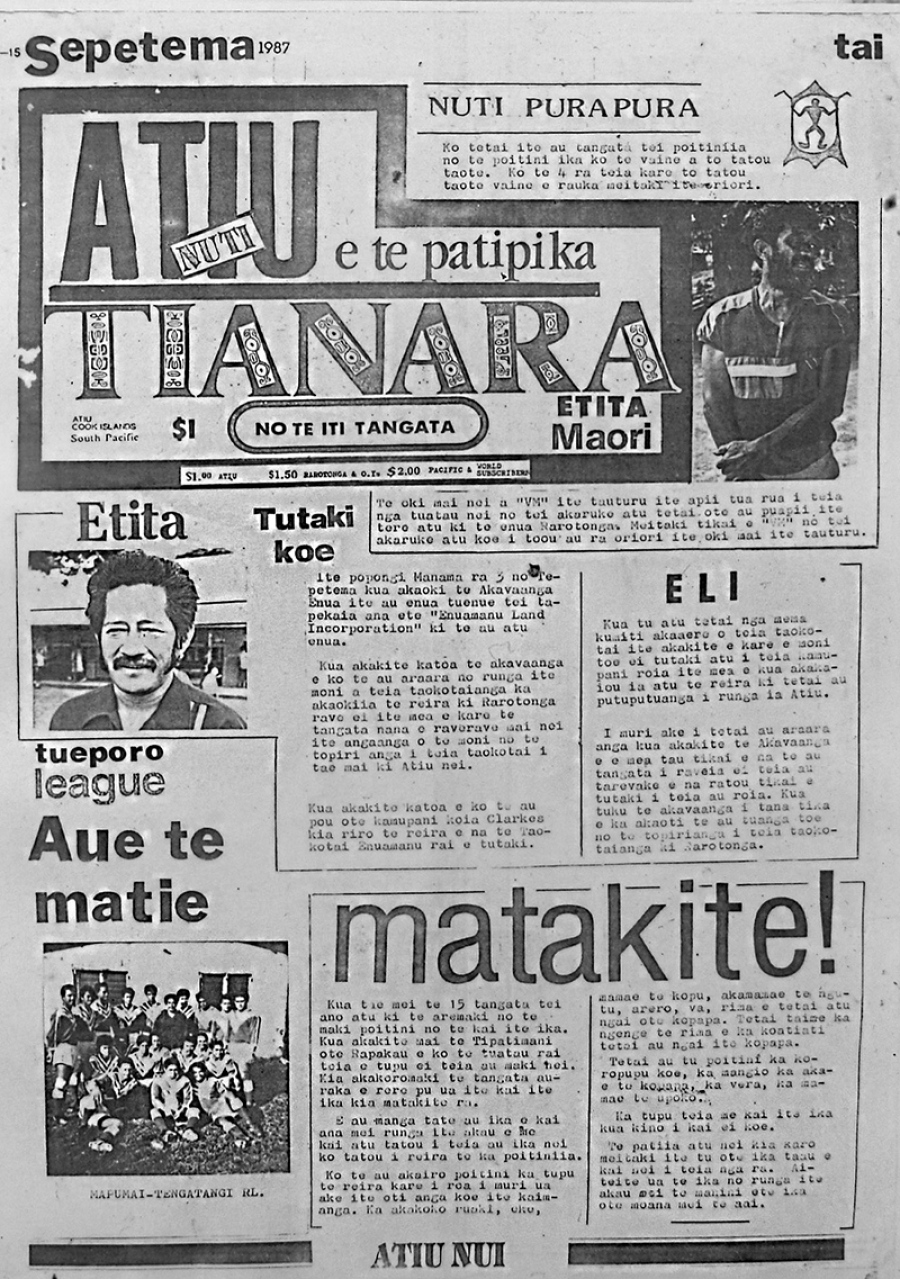 The Atiu Journal, 1987 Published by Terai Manea, on behalf of sole proprietor Terupe Patiare Kelly. This was a community paper introduced by David Lewis as the editor with the support of Roger and Kura Malcolm. Coverage included high court report, hotline, reader survey, welfare watch, sports news and advertisements. 19091254

Sixty-two years, and nobody ever told him. Dr Ranginui Fariu was genuinely surprised to learn he had featured in a Tereora College school photo published in the first existing edition of Cook Islands News, in 1957 shortly after the paper first launched.

Dr Fariu had never known of the photo and was Intrigued to hear more. It brought back warm memories.

Fariu had received the Sir Maui Pomare scholarship (named after one of the first New Zealand Maori MPs) while attending Apii Nikao primary. The award is similar to the Dux award presented today.

The following year he attended Tereora College, and remembers teachers Rangi Moeka’a, Tere Tangaroa and the principal at the time, Mr Kingston.

He was in the first class at the college to sit School Certificate exams in the Cook Islands.

They all failed: “We all didn’t do well in English, and back then you had to pass English.”

So they all returned to college the following year and repeated.

Leaving Tereora in 1961 he flew to Fiji via Samoa with Sonny Gifford. They had both received scholarships that put them on paths of study to become doctors.

Dr Fariu continues to practice today and is the Director of Psychiatric Services at the Ministry of Health.

And it’s stories like these that come to light, when one steps into memory lane and visits the Archives centre at the National Auditorium to see the 23 publications from the 125 years in the Cook Islands.

The earliest copy of Te Torea, a Roman Catholic journal, was printed in 1895. It was kindly lent to her to copy – this is the earliest publication known to the Archives department.

Collecting and gathering what information she could on the early issues was interesting to Paniani.

This is all part of our history, it’s important for us to learn about our own history and not just about other countries out there, she says

She appreciates learning and receiving information on our heritage and assisting those searching for family connections. “We need to know who we are today.”

· Meitaki maata to Chief Archivist Paula Paniani for her kind assistance and permission to print contents of the 2014 exhibition she curated on Cook Islands publications.

Te Torea 1895: A Roman catholic publication produced in 1985, that centred on the church activities particularly the priests and the clergy. Information included scripture readings and news of each of the parishes in the Cook Islands.

Cook Islands Review, 1969: This was revived in in 1967, published by the Department of Internal Affairs. Editor was Walter H Hambuechen. The publication covered mainly community events like Nuku or Gospel day, parliamentarian visits, youth uniform organisations and photographs.

The Petitioner, 1989: Published by John M, in 1981 edited by the committee for Constitutional Reform and Honesty in Government.

The Atiu Journal, 1987: Published by Terai Manea, on behalf of sole proprietor Terupe Patiare Kelly. This was a community paper introduced by David Lewis as the editor with the support of Roger and Kura Malcolm. Coverage included high court report, hotline, reader survey, welfare watch, sports news and advertisements.

The Cook Islands Press, 1998: A weekly newspaper edited and co-owned by Barbara Dreaver and Jason Brown.

The earliest copies at Archives begin in 1957, though it is thought this newspaper began in 1954.

Just 500 copies were printed each day – a tiny fraction of its circulation today.

Cook Islands Gazette
This was the official newsletter of the Cook Islands Administration. Printed by Henry Nicholas in 1898, it was published by the authority of the Federal Council. It provided ion formation on the official appointments made by the resident commissioner for the. It also included the ordinances passed by the federal council.

Ioi Karanga 1898
This was introduced as a community newspaper printed Maori and English by the late Henry Nicholas. It had the endorsement of the LMS church and supported by the Ariki of Rarotonga.

Te Akatauira
First produced in 1936 by the late Sir Albert Henry backed by the business community. Information focused on the activities of the Cook Islands Administration that affected growers in trying to sell their produce for income, more particularly as an export to the New Zealand markets, raising these issues was considered a threat. Eventually it became a political tool to advance the future of the Cook Islands Party.

Weekender
A political newspaper by the Democratic Party with the first issue in December 1975, published by the Weekender Publishing co Ltd.

Karere Auau
The first volume was published in November 1985, under the editorship of John Herrmann. It featured correspondence with the Mangaia Taokotai anga to deliver information of the activities of the Mangaia communities.

Cook Islands Pictorial Weekly
Produced by the Public Relations branch of the Department of Internal Affairs.