Concert prayers answered as rain holds off till finale 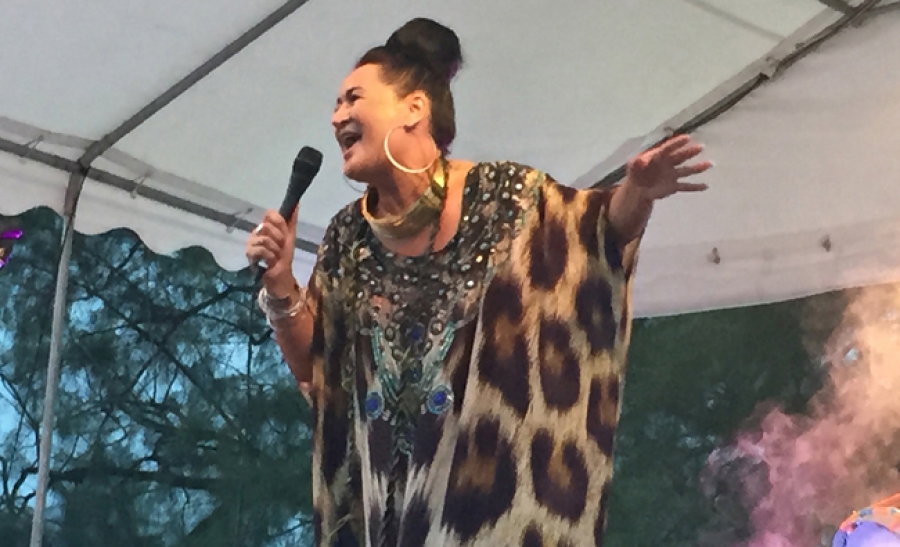 Motone co-director Glenda Tuaine said she’d been praying the rain would hold off – and so it did for most of the Tarekareka ‘Our People, Our Music,’ concert

at Nukupure Park on Thursday afternoon.

The first event in a huge year for the Cook Islands – the 50th anniversary of self-government, the New Year’s Day concert was an outstanding success, with hundreds pouring into the park throughout the afternoon to enjoy some rare fine weather and a wonderful line-up of professional entertainment.

There were plenty of food stalls to feed and water the hungry, and it was a true family event, enjoyed by everyone from very young children to grandparents. Tourists and Cook Islanders home for the holidays boosted the crowd and the replies to questions asked by Tuaine as she gave away free goodies to the crowd showed that the visitors came from far and wide.

The weather was warm and pleasant for most of the afternoon as an amazing line-up of talent kept the show humming along. There was something for everyone, from the traditional drumming of the Takitumu Drummers to solo artist Kahiki and popular trio Island Groove. Ridge Ponini and the Boys of Harmony took the entertainment in a different direction with their classic gospel harmonies, before group member Ridge Ponini gave the crowd a taste of operatic arias, later joining with Bonadventure Allan Moetaua for an acoustic guitar-accompanied rendition of ‘O Solo Mio’

A highly polished performance by local duo TriggerFish continued the high standard of entertainment as crowds continued to pour into the park, then there was a short break as the stage was set up for a highly anticipated performance by Annie Crummer.

From the opening note of her first song, Crummer certainly gave the crowd what they had come for, getting many on their feet dancing as she performed some of her best-known numbers. Crummer and her band’s powerful and energetic performance showed why the Cook Islander is still one of New Zealand’s most loved entertainers and she was clearly happy to be on stage in Rarotonga, keeping up a flow of cheerful banter between songs.

After another break to sort out ‘technical issues’ and with the sky darkening, it was time for a performance by the man the crowd had been waiting for and veteran musician Will Crummer and his band took the spotlight.

It was then, unfortunately that the heavens decided it was time to burst and rain sent most of the children and dancers from the crowd scuttling for shelter or huddling under mats. Crummer, however, showed that age hasn’t dulled his musical talents and he put on a fine performance, running through some old standards that would have evoked fond memories for many of the older people in the crowd.

Fireworks over Muri’s spectacular lagoon ended the night on a high note, and everyone in the park would have gone home slightly damp, but well satisfied from an exceptionally well organised and enjoyable show.